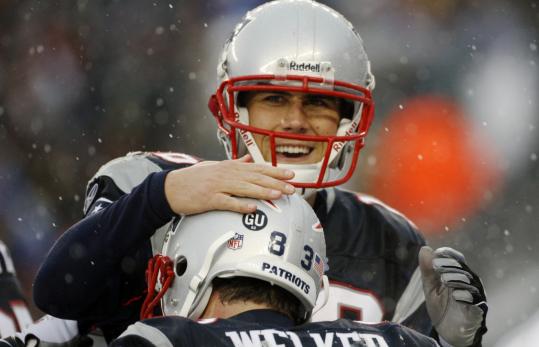 Matt Cassel took over for Tom Brady and led the Patriots to an 11-5 mark but no playoff berth. (File/The Boston Globe)
By Christopher L. Gasper and Mike Reiss Globe Staff / July 15, 2009
Text size – +

Former Patriots quarterback Matt Cassel has parlayed his one season as an NFL starter into a lucrative longterm contract with the Kansas City Chiefs.

The Chiefs announced yesterday that they’ve signed Cassel to a multiyear deal. A source close to Cassel confirmed that he signed a six-year, $63 million deal that includes $28 million in guarantees.

The Patriots traded Cassel and outside linebacker Mike Vrabel to the Chiefs, whose general manager is former Patriots vice president of player personnel Scott Pioli, for a 2009 second-round pick Feb. 28. The Patriots used that pick (No. 34) to select rookie safety Patrick Chung.

A 2005 seventh-round pick of the Patriots, Cassel was forced into the lineup last season after Tom Brady tore the anterior cruciate and medial collateral ligaments in his left knee on a lunging hit by Kansas City safety Bernard Pollard during the first quarter of the season opener. Serving as the starter the rest of the way, Cassel, who had not started a meaningful game at QB since high school, led New England to an 11-5 record.

Cassel started out as a beleaguered backup but turned out to be a fantastic fill-in for Brady, throwing for 400 yards in back-to-back games against the Jets and Miami and tossing a career-high four touchdown passes against the Raiders. In 16 games (15 starts), Cassel completed 327 of 516 passes (63.4 percent) for 3,693 yards and 21 touchdowns with 11 interceptions. He rushed 73 times for 270 yards and two scores.

Pryor agrees
The Patriots reached a contract agreement with defensive lineman Myron Pryor - a sixth-round draft choice out of the University of Kentucky - making him the third of their 12 selections to come to terms.

Pryor joins cornerback Darius Butler (second round) and offensive lineman Rich Ohrnberger (fourth round) as rookies who have agreed to, or officially signed, contracts.

Pryor, the 207th overall selection, signed a four-year contract with a $79,000 signing bonus, according to a league source. The deal includes the standard minimum salaries each year, with an escalator in the final year that could increase its value.

The 12-player rookie draft class is the largest in Bill Belichick’s tenure (2000-present), which has kept senior football adviser Floyd Reese busy. Reese, a veteran front-office executive in his first year with the club, is the primary point person for rookie contracts.

Pryor appeared in 46 games with 34 starts at Kentucky, totaling 111 tackles while playing defensive tackle in the Wildcats’ 4-3 scheme.

One of his top performances last season came against highly regarded Louisville center and Bills first-rounder Eric Wood (28th overall selection), when he recovered a fumble and returned it 72 yards for a touchdown, and also caused a fumble that a teammate returned for a score. Pryor was named Southeastern Conference Player of the Week for the performance, becoming the first Kentucky player in 16 years to receive the honor.

Vollmer close?
The Patriots could be closing in on a deal for offensive tackle Sebastian Vollmer. Leonard Roth, the agent for Vollmer, the last of the Patriots’ four second-rounders, taken No. 58 overall, said he and the team are progressing toward a deal.

“We are having substantive talks with the Patriots and hopefully come to a deal very shortly,’’ said Roth via e-mail. “We are not that far apart and all are of the view to get him to camp on time.’’

Rookies are scheduled to report for training camp July 26.