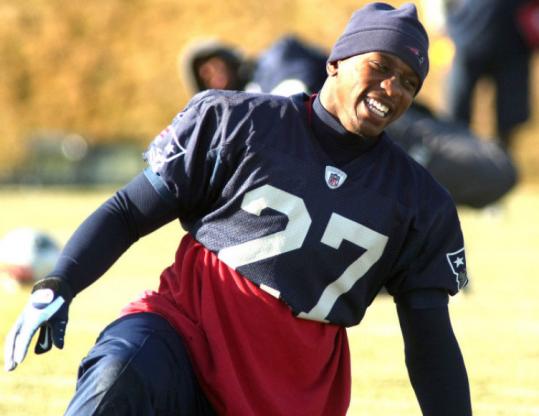 The Patriots reunited Ellis Hobbs with Asante Samuel yesterday, shipping the cornerback to the Philadelphia Eagles.

The Patriots parted ways with Hobbs for a pair of fifth-round picks, a pittance compared to the six-year, $57 million contract the Eagles used to lure Samuel from the Patriots last offseason.

The trade caught Hobbs by surprise.

"Personally, I think it's shocking because you've been playing so many years for an organization," Hobbs told the Philadelphia media. "[You] had some success and [you're] doing your thing, but on the other side it's a business. I had been telling my family members for a while I just had a feeling . . . You see how the organization is making moves throughout the offseason. You figure that something is going to shake. You just never know when, but when I got the call, no bad blood, no hard feelings. I'm excited to be playing for the Eagles now."

Hobbs was the top corner in a Patriots secondary that allowed 27 touchdown passes last season, second-most in the NFL, and tied for second in most pass plays of 40 yards or more, surrendering 12.

It's obvious one of coach Bill Belichick's objectives this offseason has been to upgrade his secondary. The signing of veteran free agent cornerbacks Shawn Springs and Leigh Bodden and the drafting of Connecticut cornerback Darius Butler in the second round Saturday made Hobbs, a frequent target of opposing quarterbacks and critics, expendable.

The Patriots also have second-year cornerbacks Terrence Wheatley and Jonathan Wilhite on the roster.

"I'll just say that the Ellis Hobbs trade was not something that we anticipated," said Belichick. "It was just one of those things that, based on the way things went and where our team was and what the opportunity was with Philadelphia, we thought that was the best thing to do for our team."

The 25-year-old Hobbs started every game the last two seasons, fighting through groin and shoulder injuries.

Last season he started at right cornerback and finished second on the team with three interceptions, tying his career high. He added 46 tackles (according to coaches' film review), 11 passes defended, and 1 1/2 sacks. In four seasons with the Patriots, Hobbs had 11 career interceptions, including two in the 2007 playoffs.

In 2007, he set an NFL record for the longest kickoff return for a TD with a 108-yard effort against the Jets.

Hobbs's agent, Kevin Omell, said there had been no discussions about a new contract for Hobbs, who was entering the final year of his contract and was due to make $2.54 million in base salary.

Hobbs admitted he wasn't thrilled with the lack of progress on a new contract.

"Not at all," he said. "It is definitely frustrating when you see guys getting certain amounts of money that you know you can get just as much, that you deserve. Especially, some of the situations that I've been in as far as playing through injuries, a torn shoulder, a torn groin, and this and that. To take some of the blows that I did from the area and the community and to put it on the line day in and day out when I know some other guys were not doing that and to get the money you get, you are definitely not happy with it. That is what it is, and I am getting paid more than a lot of people in this world are."

The loquacious cornerback was often the target of fan criticism, fairly or unfairly.

A hobbled Hobbs, who silently played with a groin injury as well as a torn labrum in the latter part of the 2007 season, took a lot of heat after he was beaten by the Giants' Plaxico Burress for the winning touchdown in Super Bowl XLII, ending the Patriots' pursuit of a perfect season.

Last season, he criticized fans who booed the Patriots during a 38-13 home loss to the Miami Dolphins in Week 3.

His former teammates appreciated his candor and accountability.

"Ellis was a good friend and teammate," said linebacker Adalius Thomas. "He came to work and made a lot of plays for us."

Hobbs was honest to the end.

"From the business side, they feel like they can make moves other places," said Hobbs. "Maybe they weren't as successful as when I was there coming in initially to now. Maybe they wanted more success or maybe they wanted something different to shake something up. I don't know. You can never figure it out all because I'm not that person; I'm not that organization. Obviously, they wanted to do something. They saw value in me to get rid of me and to get something else in there."