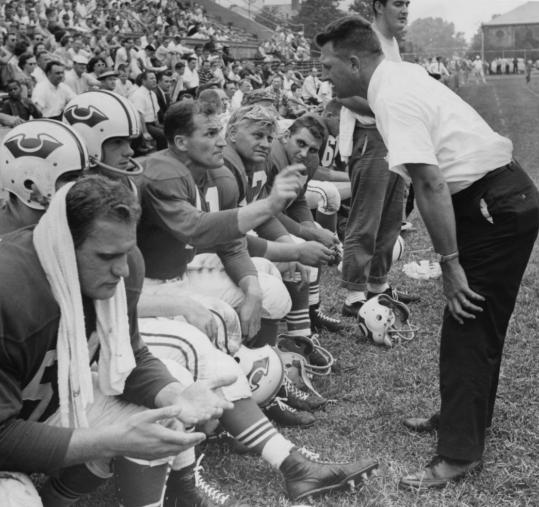 Lou Saban talked to Patriots quarterback Butch Songin (with hand up) during an exhibition game in 1960. The team, hampered by a late start in recruiting, went 5-9 in its first season. (Globe Staff/ File)
Wire And Staff Reports / March 30, 2009
Text size – +

Lou Saban, the first head coach of the Boston Patriots team as the American Football League was launched, died yesterday at his home in North Myrtle Beach, S.C. He was 87 and had recently suffered a serious fall, said his wife, Joyce.

Over a career that spanned five decades, Mr. Saban became known for how quickly he changed jobs. After the Patriots, he coached the Buffalo Bills to two AFL titles, joined the Denver Broncos, then returned to the Bills to coach O.J. Simpson. At the collegiate level, he coached teams at Miami, Army, , and Maryland.

He even coached high school football from 1987 to '89 and briefly ran the New York Yankees for George Steinbrenner.

But it was the winter of 1960 when Mr. Saban, who had played football in college and then with the Cleveland Browns under the great Paul Brown, was picked by Ed McKeever and team owner Billy Sullivan to build the first Patriots team.

In a 1994 interview with Globe sportswriter Michael Madden, Mr. Saban recalled the obstacles he faced.

"The thing is, we started so late," he said. "We were the last team. All the good players were gone. . . . We had to take what was left over.

"We had tryouts in the city of Boston from one end to the other. We had bricklayers, we had carpenters, we had stoker men . . . you name it, we had it."

In time a team was formed, a hardworking one. But the Patriots went 5-9 for the season.

"We just never wanted to look bad," Mr. Saban recalled. "We wanted to show we could play so the NFL wouldn't make fun of us."

As his second season began, Mr. Saban was shoring up his defensive line, bringing in some talented young players, and just as "we were starting to have a team," he was fired, he told Madden. Sullivan replaced him with Mike Holovak, who went on to win seven games. "No hard feelings," Mr. Saban said. "Mr. Sullivan owned the team. He could do what he wants. I've always felt that way."

"He has been my friend and mentor for over 50 years, and one of the people who helped shape my life," Steinbrenner said yesterday in a statement.

"A part of his football legacy will forever be linked to many of the firsts in our franchise's history," Kraft said in a statement. "This season, we will be celebrating the Patriots' 50th anniversary and reflecting back on that inaugural season. It should give us all cause to appreciate Lou's many contributions during the Patriots' formative years."

Louis Henry Saban was born in Brookfield, Ill., in 1921 and was a 1940 graduate of Lyons Township High School. After starring at Indiana, he played for the Browns from 1946 to 1949, and the next year accepted his first head coaching position - at Case Institute of Technology in Cleveland.

In 1955, Mr. Saban took over at Northwestern for a year, then moved to Western Illinois until the call from McKeever brought him to Boston.

Former Bills defensive back Booker Edgerson, who played for Mr. Saban at Western Illinois and with the Broncos, said Mr. Saban "was a great teacher. He knew how to build football programs. He could have built any program - football, baseball, basketball, whatever. Even though his patience was short-tempered, he allowed players to let out their anxieties and frustrations."

After quitting the Bills in midseason of 1976, Mr. Saban spent two years as athletic director at Miami, where he recruited future Buffalo quarterback Jim Kelly.

Mr. Saban later became known for how quickly he changed jobs. He coached Army in 1979, was AD at Miami, and spent 19 days as athletic director at Cincinnati. He went on to coach high schools, colleges, and in the Arena Football League.

"My coaching techniques are pretty much the same," he told a reporter in 1994, "with some adjustments for what younger players can and can't do."