Welker open to getting number called 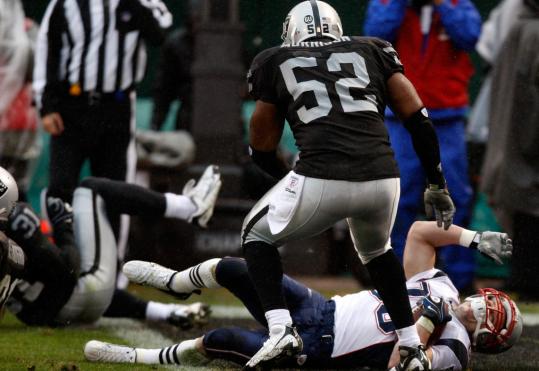 Wes Welker took a big hit before getting into the end zone on his 100th reception of the season. (Barry Chin/Globe Staff)
By Rich Garven Worcester Telegram & Gazette / December 15, 2008
Text size – +

OAKLAND, Calif. - The spotlight coming in was on the return of Randy Moss, who was last spotted here as a disgruntled Raider in 2006.

But it didn't take long for fellow receiver Wes Welker to gain the attention of the Raiders and their rowdy, rain-soaked fans at Oakland-Alameda County Coliseum.

Welker got open early and often, igniting an offense that scored on its first four possessions as the Patriots took a 28-7 lead before downshifting and cruising to a 49-26 win that completed a sweep of their second West Coast trip.

"Offensively, we had a lot of guys that had a lot of big plays for us," coach Bill Belichick said. "Wes and Randy and certainly the backs, but Wes has been a clutch player for us all year and he did it again.

"There was a lot of man-to-man coverage . . . they get up on the receivers tight and it's really up to those guys to be able to get free and get away from them. They did a great job of that."

It was a historic day for Welker, who has been making headlines since the Patriots pulled off a heist in getting him from the Dolphins prior to last season.

The former Texas Tech standout finished with six receptions for 69 yards and a touchdown, giving him 102 receptions with two games to go.

"We have a lot of team goals we have yet to reach and that's what we're after now," Welker said. "I don't think we've ever really been about individual stats or anything like that. It's about us going out as a team and just executing and doing your job each and every play."

The Patriots' first possession started at the Oakland 40 following a shank by punter Shane Lechler. After an incompletion and a short gain by Sammy Morris, Welker found a big hole on the right side and pulled in a 16-yard completion for a first down.

Two plays later, Welker caught his second pass. This one went for 7 yards and another first down to the Raiders 10.

"It was kind of what we practiced and what we had seen through the week," Welker said of the Raiders' Cover 1 funnel defense. "So, I felt prepared for it and [was] able to get to the sticks and move the chains a little bit."

Kevin Faulk finished off the nine-play drive, catching a 7-yard pass on a crossing pattern to make it 7-0 with 4:37 gone in the game. The rout was on.

Randy Moss had a 20-yard touchdown reception and Morris ran for a 29-yard score to push the lead to 21-0 with 3:43 left in the first quarter. Welker made sure the good times continued in the second quarter.

On first and 10 from the Oakland 46, quarterback Matt Cassel stepped up to avoid the rush and found Welker open down the middle for 30 yards.

Welker, despite slipping as he got off the line, scored his second touchdown of the season with a 13-yard reception two plays later to make it 28-7 with 13:12 left in the half. It was his 100th catch of the season.

"We thought we were going to get Cover 2 and we got it," Welker said. "I was able to come across and [Faulk] put a good block on them and I just wanted to make sure I got in the end zone."

The last couple of yards didn't come easy. Welker absorbed a shot to the helmet from cornerback Nnamdi Asomugha as he entered the end zone.

"It was one of those deals where you knew you were going to take a little hit," he said. "But I haven't gotten in the end zone too much so I wanted to make sure I got in on that one."