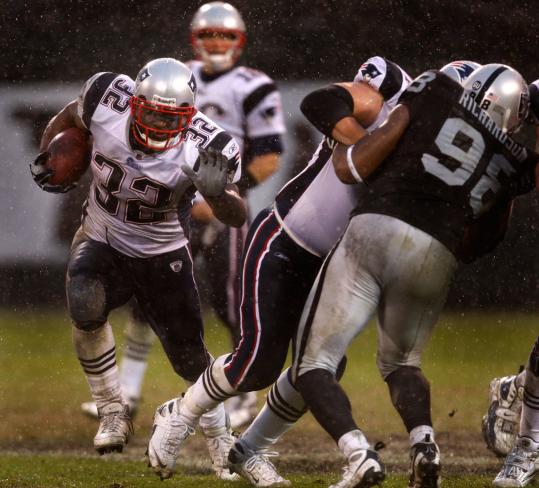 LaMont Jordan was off and running against his former team when he dashed 49 yards for a TD. (Barry Chin/Globe Staff)
By Christopher L. Gasper Globe Staff / December 15, 2008
Text size – +

OAKLAND, Calif. - LaMont Jordan's 49-yard touchdown run in the fourth quarter might have seemed meaningless in the grand scheme of the Patriots' 49-26 win over the Oakland Raiders because it came when the game was in hand, but it was very meaningful to Jordan.

After watching former Raider Randy Moss score twice, Jordan acknowledged he wanted to get in the end zone against his old team, who gave away his job last season and then forced an acrimonious parting this summer, letting Jordan dangle before finally releasing him July 26.

"It feels good to come out here, especially here for me personally where the coaches didn't want me here, and even when I wore the uniform a lot of fans were booing me, saying, 'Get out of our city,' " said Jordan, who had 12 carries for 97 yards. "So, to be able to come back here and pick up this victory and score a long touchdown - I thought they said I had no more speed - it definitely feels great."

Jordan was booed on his first carry, a 2-yard run in the first quarter, but said his overall reception was better than he thought.

"I was surprised to hear how many fans were saying, 'Welcome back, we miss you,' " said Jordan. "I had the typical boos and 'you [stink]' and 'you have five carries, you're going to fumble on the sixth.' It was good to come back. I've always said I like to play in front of this crowd. [This] is no different. We had some rain and it was muddy and we put up a lot of points, and it was a great feeling."

Patriots coach Bill Belichick said Jordan, who came back last week against Seattle after missing eight games with a right calf injury, had his best week of practice leading up to the Raiders game. It showed.

While Jordan was revved up to face the Raiders, he said his performance was also reflective of him getting back in the groove of the ground game.

"It wasn't so much because we were playing Oakland," he said. "It's just that I've been out for so long. Last week was an opportunity to come into the Seattle game, that was just a game for me to feel my way through. This week I had my feet up under me. I had a good week of practice. I'm glad the game is over with. We have to come back this upcoming week and we have a big, big game against Arizona."

Return trip
After entering the game with six kickoff returns over 40 yards but no touchdowns, Ellis Hobbs finally found the end zone yesterday. It was his third kickoff return for a touchdown, tying the Patriots record set by Raymond Clayborn, who had three in 1977.

"I know Justin personally and what type of returner he is, and before the game we wished each other well, when I saw him get one in the back of my mind I said, 'We need a response to that,' " said Hobbs. "Obviously, going out there, I love touchdowns, but I was just trying to make a big play and it turned into a touchdown."

After being tackled by a couple of kickers this year, Hobbs said he wasn't going to let Oakland's Sebastian Janikowski stand in his way of the end zone.

"No way," said Hobbs. "When you come from a couple of weeks of frustration where you almost had it, you almost had it. That's one where you really feel it. I just said, 'You better not get tackled by Janikowski.' You know any time you get a kicker in that situation you know what kickers are trying to tackle and which ones are just trying to look better on film. He's one of those guys just trying to look decent on film, and the little push didn't get it done and we had the touchdown."

Rookie ball
Rookie Jonathan Wilhite made his second straight start at left cornerback and came up with his first career interception, picking off Raiders quarterback JaMarcus Russell, who had audibled to change the play, at the Patriots 1-yard line late in the second quarter.

"The linebacker and the safeties, I heard them yelling, 'Shot, shot play.' So, he audibled out of something and into the fade route, and I just tried to be on top of it," said Wilhite.

Wilhite saved the ball and said that he planned to give it to his mother, Glenda Miley.

"I give her everything anyway," he said. "She has a trophy case for me. That's something I want to have for the rest of my life."

Light, Guyton injured
The injury bug continued to bite the Patriots. Left tackle Matt Light left the game in the second quarter with a shoulder injury and did not return. Light was hurt on a 9-yard run by Jordan and was replaced by Mark LeVoir.

Already depleted at linebacker, the Patriots lost rookie Gary Guyton, who with Tedy Bruschi out drew the start inside next to Jerod Mayo, to an ankle injury. Guyton was hurt on the Raiders' final drive of the first half and was unable to return.

With Guyton starting inside, Rosevelt Colvin drew the start outside. He finished with two tackles.

Missing the point
Nose tackle Vince Wilfork's blocked extra point in the third quarter following Ronald Curry's 10-yard touchdown reception was the first blocked extra point by the Patriots since Oct. 6, 2002, when Tebucky Jones blocked an Olindo Mare extra point in the Patriots' 26-13 loss at Miami . . . Wide receiver/special teams ace Kelley Washington, who had been sidelined by a thigh injury, was active for the first time since Nov. 23. Washington tackled Raiders kickoff returner Justin Miller on the opening kickoff at the Oakland 7 . . . Ty Warren (partially torn groin) was active for the first time since Nov. 23 . . . The Patriots scored 21 points in the first quarter yesterday, tying the team record for most points in the first quarter . . . The Patriots defeated the Raiders in Oakland for the first time since Sept. 24, 1978 . . . As expected, the Patriots were without safety James Sanders, who had not practiced leading up to the game because of an abdomen injury. He was replaced in the starting lineup by Lewis Sanders. Bruschi (left knee) had already been declared out before the game. The other Patriots inactives were tight end Tyson DeVree, running back BenJarvus Green-Ellis, and offensive linemen Billy Yates, Wesley Britt, and Dan Connolly. Matt Gutierrez was designated as the third quarterback . . . After missing last week's game with an ankle injury, rookie outside linebacker Vince Redd returned to action . . . After being a healthy scratch last week in favor of DeVree, David Thomas was active for yesterday's game.