Receiver Gaffney may be an option 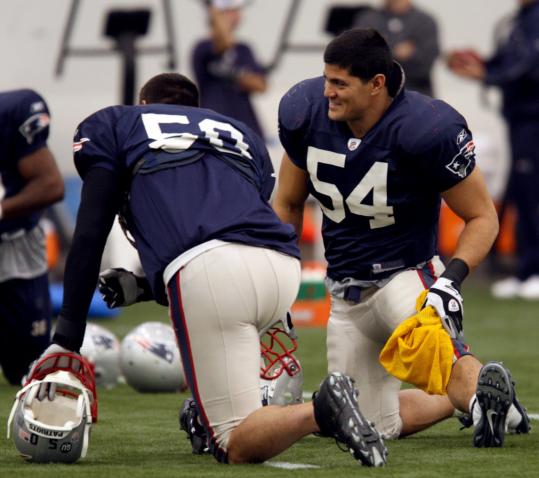 FOXBOROUGH - There were not many positives for the Patriots in their first meeting with the Dolphins, a 38-13 loss, but one of the bright spots was wide receiver Jabar Gaffney.

As the Patriots prepare for Sunday's rematch in South Florida, Gaffney again could be a part of the game plan, especially if Miami follows a script similar to that of the Jets, who double-covered Randy Moss and put their best cornerback on Wes Welker in the slot.

Patriots coach Bill Belichick said yesterday that Miami has been moving its best cornerback, Will Allen, to the slot and bringing in safety/corner Jason Allen to play left cornerback.

Gaffney and the Patriots were able to capitalize on the Jets' strategy, as Gaffney had season highs in catches and receiving yards and caught his first touchdown pass (a 19-yarder before the half) since the first meeting with Miami.

"If teams are going to come in and try to take Randy and Wes out of the equation, other people have to step in and make plays in order for us to be able to move the ball," said Gaffney. "That's what we did last week, and we're going to be looked upon to do that again if another team like Miami tries to do the same thing."

Gaffney has responded well since his ghastly and costly drop against the Colts. In the last two games, he's had 11 receptions for 122 yards and a score. That's about half his production for the season (23 catches for 240 yards and two touchdowns).

"It's always fun making plays," said Gaffney. "That's why we all play the game. The more plays, the more of a groove you get in and it's fun."

The Patriots practiced in full pads yesterday for the first time since Oct. 17 and did so inside the Dana-Farber Field House. Both details are significant. Belichick mentioned yesterday that the Dolphins are "playing physical, running the ball, stopping the run." The only way to truly simulate the run game and a physical style of play is to practice in full pads, and based on the way the Dolphins gashed the Patriots on the ground in the first game, that's an area New England would want to focus on. With temperatures for Sunday's game expected to be in the mid 70s, practicing indoors - and turning up the heat - allows the Patriots to simulate some of the game conditions they could encounter . . . Running back Sammy Morris said it was nice for the Patriots, who last played Thursday against the Jets, to have an extra day to prepare for Miami. "It was nice to have the time off, but at the same time it's great to get going again and have an extra day of preparation and work to go against them," said Morris.

Defensive end Richard Seymour, running back LaMont Jordan, linebacker Eric Alexander (hamstring), and linebacker Adalius Thomas (broken right forearm) were the players not accounted for during the media portion of yesterday's practice. Seymour's absence was somewhat surprising, but the Patriots are not required to file a practice participation report until today. Jordan, who has missed the last six games with a right calf injury, politely declined to speak to reporters.

The Patriots have four players in the top five in the fan portion of Pro Bowl voting. Fan voting, which closes Dec. 9, accounts for one-third of the selection process, with coaches and players making up the remaining two-thirds. Matt Light is third among tackles with 80,270, trailing the leader, Dolphins rookie Jake Long (108,943). Moss is fourth among wideouts with 188,138, behind leader Brandon Marshall of the Broncos (232,234). Tedy Bruschi (49,780) is fourth among inside linebackers behind leader Ray Lewis of the Ravens (168,566), and Larry Izzo is second among special teams players with 43,462 votes, trailing Anthony Madison of the Steelers, who has 47,147. Miami's Ronnie Brown is the AFC leader among running backs and Miami's Joey Porter leads AFC outside linebackers . . . The Patriots lost offensive lineman Jacob Bender, who was plucked off the practice squad by the San Francisco 49ers.