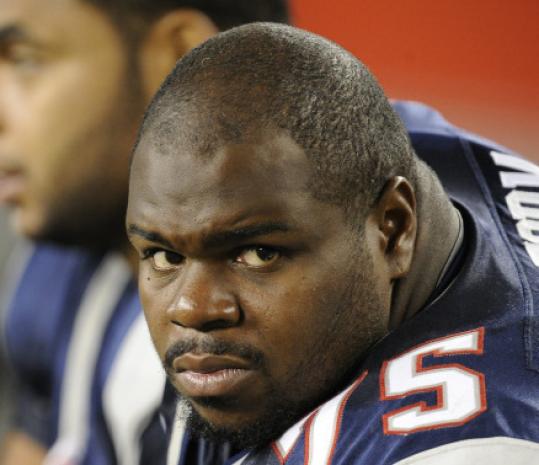 Wilfork, one of the league's premier players at his position, was summoned to the league's New York headquarters to meet with Goodell regarding a possible suspension, an NFL source said.

The meeting comes after Denver Broncos coaches sent the NFL film from their Oct. 20 matchup against the Patriots. According to the NFL Network, the film showed Wilfork elbowing Broncos quarterback Jay Cutler in the head after a play.

Most times when players are deemed to have violated the rules, the NFL levies a fine. But Wilfork's past transgressions - he was fined four times last season for a total of $35,000 - likely factored into Goodell's request for yesterday's face-to-face meeting with Wilfork and his agent, Kennard McGuire.

The NFL did not announce a fine or suspension for Wilfork yesterday.

Wilfork, who turns 27 Nov. 4, previously has defended himself against those who label him a dirty player.

Last September, after he was fined $12,500 for a low hit on Bills quarterback J.P. Losman, he said, "If you know me as a person or a player, then it wouldn't be an issue because they know I have too much love and respect for this game and for players for me to ever be a dirty player."

Wilfork appealed that fine and it was reduced by $2,500, but the NFL later fined him three more times - $5,000 for a late hit on Dallas Cowboys tight end Jason Witten, $15,000 for pointing his right index finger inside the facemask of New York Giants running back Brandon Jacobs, and $5,000 for grabbing the facemask of San Diego Chargers running back Michael Turner in the AFC Championship game.

Wilfork did not appeal the fine for pointing his finger in Jacobs's helmet, saying at the time that "when I screw up, I admit I screwed up."

The Patriots were not caught by surprise by Wilfork's meeting with Goodell. In his weekly radio appearance on WEEI Monday, coach Bill Belichick noted that the NFL informed the team it was looking into Wilfork's actions against the Broncos.

"I went and looked at our film of the Denver game and there isn't anything on there," Belichick said on the radio station. "You can't see any contact between Vince and Jay Cutler on our game tape. That's all I have to go on. I'd say it's a league matter and whatever the league is going to do with it, they're doing with it."

Belichick acknowledged that it's possible the Broncos' video crew had a different angle on the play, or simply filmed the play longer.

Losing the 6-foot-2-inch, 325-pound Wilfork, even for one game, would be a tough blow for the Patriots because he has a unique skill set to play nose tackle.

The top backup is four-year veteran Mike Wright (6-4, 295), who has been more of a pass-rusher than run-stuffer this season. He has played in 42 games for the Patriots, with five starts.