Ready (or not) for Colts 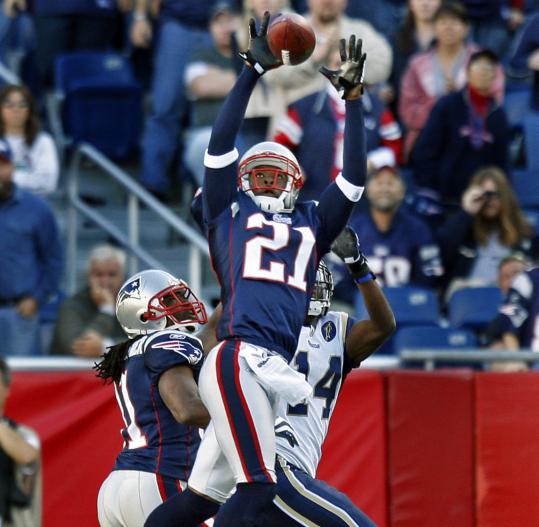 FOXBOROUGH - Counting healthy cornerbacks in the fourth quarter is usually not a good sign for a coach and his secondary. That was exactly the position the Patriots and Bill Belichick were in Sunday during their 23-16 win over the St. Louis Rams.

After Ellis Hobbs injured his shoulder breaking up a long pass with 7:45 left and Mike Richardson was hurt covering a kickoff, the Patriots, already without inactive cornerback Lewis Sanders (hamstring), were caught shorthanded. The Patriots had to resort to putting cornerback Deltha O'Neal, who had left the game in the first quarter with a head injury, back on the field, along with rookies Terrence Wheatley and Jonathan Wilhite and safety-turned-emergency corner Brandon Meriweather.

The makeshift secondary survived, as O'Neal sealed the game with an interception, but now the question is, which cornerbacks can the Patriots count on this Sunday, when they travel to Indianapolis to face the Colts and Peyton Manning?

Even with a healthy defensive backfield, the Colts' passing attack can be painful for a defense to face, so having to defend Indianapolis with both starting cornerbacks (Hobbs and O'Neal) ailing, the health of the only other non-rookie corners (Sanders and Richardson) uncertain, and bellwether Rodney Harrison out for the year seems like adding insult to injury.

"Whoever is called upon to play, they got to be ready to play and ready to play at a high level," said safety James Sanders, the lone injury-free, regular starter left in the secondary. "Going down there in Indy, they're going to have the place rocking and Peyton is going to be amped like he always is to play us."

The Patriots have brought along rookie cornerbacks Wheatley and Wilhite slowly, but there might be no choice but to expedite their education. Are they ready to match up against Manning and receivers Marvin Harrison, Reggie Wayne, and Anthony Gonzalez?

"I don't know if I am ready for them," said Belichick. "We will find out on Sunday night. All the players that are on the team we have confidence in and confidence to put them in the game or they wouldn't be here and wouldn't be activated. That answers that question.

"Are they ready? Every week you find out. Do we have confidence to put them in there? Absolutely, that's why they are here."

While the Patriots have confidence in Wheatley, a second-round pick, he was a game-day inactive as recently as the 41-7 win over Denver last Monday night; the team chose to go with Richardson, elevated from the practice squad, ahead of him.

When O'Neal went down Sunday, it was Richardson who got the first crack at replacing him at left corner. Wilhite's role has been primarily as the slot corner or "star."

Still, Sanders pointed out that Wheatley and Wilhite have some experience going against an elite passer like Manning.

"It's just a blessing that the young guys we have here, they had a chance to play against Tom [Brady] in training camp and see what it is to play against an elite quarterback in this league, so of course it's going to help," Sanders said.

Manning vs. the Patriots secondary isn't an automatic mismatch. Despite mixing and matching defensive backs and having some occasional problems with the deep ball, the Patriots still rank 15th in the NFL in pass defense.

Plus, playing behind a banged-up offensive line and working his way back from surgery to remove an infected bursa sac on his left knee, Manning hasn't always performed at his usual level this season.

Entering their game last night with the Tennessee Titans, the Colts ranked ninth in the NFL in passing offense at 244.8 yards per game.

In the first six games, Manning had thrown for eight touchdowns, but also had seven interceptions and had completed 60.7 percent of his passes, which would be his lowest completion percentage since his rookie year (1998).

Don't tell that to Hobbs, though.

"I don't care what type of record they got," said Hobbs, who said his shoulder was sore but good. "I don't pay attention to that. Peyton Manning is going to be Peyton Manning. We've definitely got a task on our hands."

Sanders knows there are doubters who think they'll get picked apart by Peyton in his new place, Lucas Oil Stadium. He has confidence in all of his secondary mates, including Wheatley and Wilhite.

"We've been battle-tested. We've played against a couple of good quarterbacks," said Sanders. [The rookies] have gotten experience, and going against those guys, [Philip] Rivers and [Marc] Bulger, is going to help them. But as you know, Peyton is a different type of quarterback, and we're going to have to be on top of our game this week."