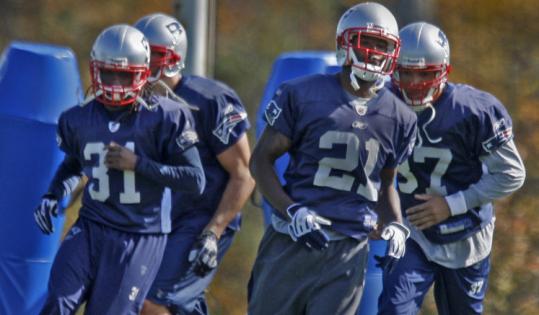 FOXBOROUGH - The plane ride from San Diego to New England is a long one as it is, but for Deltha O'Neal, it felt just about like an eternity. Boarding the Patriots' charter Sunday night, he was still stinging from the 48- and 49-yard pass plays Chargers receivers converted with him in coverage.

"I felt embarrassed. I felt down," O'Neal, the Patriots' starting left cornerback, said yesterday. "I felt like there were things I could have done that probably could have changed or made the outcome of the game different. I'm my own worst critic, so I sat there and thought about it these past couple of days, the whole flight home, and I'm over it now. It's just one game."

It was obviously one forgettable game for O'Neal, who admitted he wasn't expecting the Chargers to go deep on their first play from scrimmage, a 48-yard arcing strike from Philip Rivers to Vincent Jackson up the right side.

O'Neal acknowledged that he felt targeted on the Chargers' next drive, when Malcom Floyd caught a 49-yard touchdown pass at the goal line, again on an arcing throw.

On both plays, Jackson and Floyd crashed to the ground on their backs, cradling the ball close to their bodies as O'Neal tried to jar it free.

"I was in great position to make a play and they just came out with the ball," said the 5-foot-11-inch O'Neal of his one-on-one matchups with the taller Jackson (6-5) and Floyd (6-5). "My experience being in the NFL, nine times out of 10 if I'm that close to the ball, I'm either taking it or knocking it down. They made a good play and I didn't."

In fairness to O'Neal, who was in man-to-man coverage both times, there was little to no assistance in the form of a pass rush. The Patriots rushed the standard four on both long gains, but based on the scheme the team was playing, those four linemen were responsible first for the run and were not slanting and stunting to gain leverage on the quarterback.

So with Rivers slowing the linemen with play-action both times, it gave him plenty of time to deliver the passes.

That, in turn, left O'Neal in man-to-man coverage in the deep part of the field with no help on both plays.

Some might say O'Neal, who was replaced by rookie Terrence Wheatley for two series in the first half and one in the second, should have made the plays. Others might call it a flawed coaching scheme.

O'Neal said yesterday he didn't view his time on the sideline as a benching, calling it part of a planned rotation. He also talked about the importance of having a short memory, a key trait for any cornerback, joking that he already had forgotten about the plays but the media kept bringing them back in his mind.

For his part, O'Neal is prepared for more deep balls, starting Monday night against the team that drafted him in 2000, the Broncos. Denver has the NFL's second-ranked passing offense in terms of yardage - led by rifle-armed quarterback Jay Cutler and dangerous receivers Brandon Marshall and Eddie Royal - so O'Neal figures they'll test him deep.

"Until we get it stopped, that's what you have to expect," he said. "We're going to work hard at that, of course.

"I talked to a couple of my corners and they helped me out on the plane, saying, 'Don't worry about it, it happens. At least you didn't just get blown away. You were right there.' Which is true. It happens. I look at it as they get paid too. My job is don't make it a recurring event."

Christopher L. Gasper of the Globe staff contributed to this report; Mike Reiss can be reached at mreiss@globe.com.