A qualifier on the rush to judgment 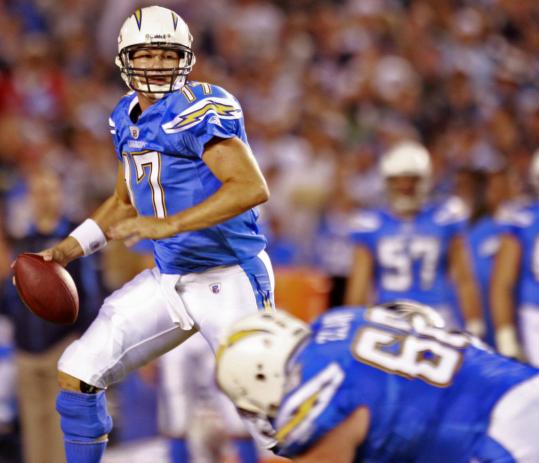 It may have seemed that Philip Rivers had all night to throw, but there was a good reason. (Matthew J. Lee/Globe Staff)
By Mike Reiss Globe Staff / October 15, 2008
Text size – +

The Patriots rushed Chargers quarterback Philip Rivers 29 times Sunday night - there were 27 pass plays and two defensive penalties on pass attempts - and did not record one sack. In fact, statisticians recorded that the Patriots did not knock Rivers to the ground once (although Mike Vrabel seemed to do so late in the third quarter).

While such statistics might be alarming to some, Patriots coach Bill Belichick didn't seem overly concerned when asked about the rush yesterday.

With the Patriots playing the majority of the time with four linemen, two linebackers, and five defensive backs - a package that made them lighter closer to scrimmage - Belichick explained that the line's first responsibility was stopping the run.

"I think you get into a little bit of a bind with a team like San Diego," he said. "They are a real good running team, and when you start stunting and moving people, which can help you get better leverage on the quarterback, it creates running lanes."

The Patriots elected not to stunt and move their linemen for most of the game, which hurt the line's ability to produce consistent pressure. It was a result of respecting the Chargers' run game.

"It is a little bit of a conflict there, especially for the linemen when you're playing the run and they run play-action," Belichick said. "You are not creating any movement with your pass rush [and] against a good, big offensive line like San Diego, you are not just going to run over those guys and power them back into the quarterback."

So for those wondering why the Patriots' four-man line couldn't generate more pressure, it was the result, in part, of the defensive plan. Also consider that the Patriots rushed just the standard four players on 19 of Rivers's 27 pass attempts.

Yet on the flip side, when the Patriots did attempt to generate pressure with more than the standard four rushers, the results weren't good. Here is how the Chargers' passing game broke down based on the Patriots' rush (including defensive penalties):

Four-man rush: 12 of 19 for 251 yards, touchdown, one pass interference penalty.

Five-man rush: 4 of 6 for 50 yards and an illegal contact penalty.

The Patriots' offensive line could be getting some reinforcements, as Belichick said that guard Stephen Neal and tackle Oliver Ross - both of whom are on the physically unable to perform list - have a "pretty good chance" to start practicing.

Teams can start practicing players on the PUP list after the sixth week of the season. Once a PUP player starts practicing, the team has a three-week window to decide whether to activate the player or place him on season-ending injured reserve.

Given that starting right tackle Nick Kaczur was carted to the locker room after injuring his right ankle in the first quarter Sunday night - and replaced by second-year player Mark LeVoir (0 career starts) - the timing seems to be good for the Patriots.

The 6-foot-4-inch, 327-pound Ross, who signed a one-year deal in the offseason, is in his 11th season and has played in 89 games with 53 starts. He has experience at both left and right tackle, and has been recovering from a collarbone injury suffered in a fall off his camper.

"When we signed him, we knew this was going to be the case," Belichick said. "He is anxious to play and we are anxious to see him play. I think we are at the point where we all want to start that process."

Neal has been the team's primary starting right guard since 2004, playing in 55 regular-season games (52 starts).

"Stephen has played a lot of football for us," Belichick said. "I think he would certainly add to the quality and depth of that group."

Just a lot of talk

At halftime of Sunday night's game, NBC showed Belichick and offensive coordinator Josh McDaniels walking off the field together, and McDaniels - perhaps because of the noise at that end of the stadium - speaking loudly in Belichick's direction. Analyst John Madden observed that the one-sided exchange didn't look good. Yesterday, Belichick was asked if the discussion was more than the standard in-game conversation. "That's all it was to me," he said. "We were talking about the first half, some things we wanted to talk about at halftime, and how we wanted to approach the second half."

Break in the action

Players were off yesterday and will be back to work today at Gillette Stadium, with a practice scheduled for late morning . . . The NFL's trading deadline passed yesterday without the Patriots making a deal . . . Andre Tippett's Hall of Fame bust will be at the Hall at Patriot Place tomorrow through Monday, giving fans a chance to see it before it heads to its permanent home in Canton, Ohio. The Patriots are calling Monday night's home against the Broncos "Andre Tippett Night."