Brown's legacy? He's a Patriot to the end 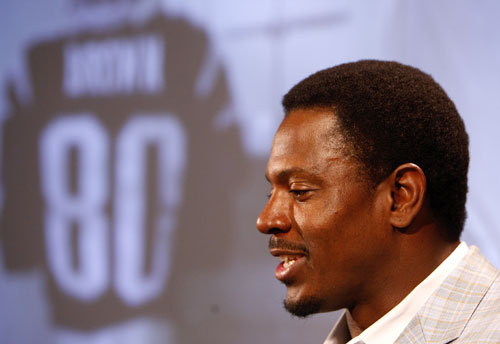 FOXBOROUGH - Troy Brown used the words "we" and "us" when talking about the Patriots during his retirement press conference yesterday at Gillette Stadium.

For an undersized and underestimated wide receiver who spent most of his career convincing people he belonged in professional football, the idea of giving up the game voluntarily was counterintuitive.

The selfless symbol of an unprecedented era of Patriots' success, Brown, a member of the Patriots' three Super Bowl championship teams this decade, put an end to the 15-year career of one of the most clutch players in Patriots history.

"I will always be a Patriot, just not in uniform," said Brown.

It was difficult for Brown's family - wife, Kimberly, and sons Sir'mon, 10, and SaanJay, 8, - to see football end, too. In a poignant moment, Sir'mon, who wept, asked his father why he was retiring if he loved football so much.

"I would love to keep playing but there comes a time when the man upstairs called God, you can't outrun him, as much as you try to and want to," Brown said. "He just catches up to you and tells you that you're 37 years old. Your knee is supposed to be hurting. Your hip is not in great shape. You can't run as fast as you used to. There's a bunch of 22-year-old guys out there that are taking your place.

"I'm no longer 22, and in this game there are very few places for guys that are 37 years old. Therefore, you have to move on and create other goals and things to achieve. It's a sad day for me too."

Brown, whose tenure in team history is second only to Steve Grogan's 16 seasons, signs off as the Patriots' all-time leader in receptions (557 for 6,366 yards and 31 touchdowns), punt returns (252), and punt return yards (2,625), but mere numbers don't tell the story of his impact on the franchise he joined in 1993 as an unheralded eighth-round pick out of Marshall.

"Troy Brown to me is the consummate Patriot, [with] what he did on the field, and the way he conducted himself off the field," said owner Robert Kraft. "He always put team first. He stayed with the Patriots throughout his whole career when he could have gone some other places and got more money."

Brown, who will work for SportsNet as an analyst, was feted by the Patriots in his formal farewell to football. The media workroom was adorned with more than a dozen photos from his Patriots career and a video montage played in the background.

The team also will have "Troy Brown Night" Nov. 13 at Gillette Stadium during the Patriots' meeting with the New York Jets, who pursued Brown in March after the Patriots informed him they would not offer him a contract.

Although he is the team's all-time leading receiver, held the season record for receptions (101 in 2001) until Wes Welker broke it last season, and still holds the team record for most receptions in a game (16 against the Kansas City Chiefs in 2002), Brown's place in Patriots' lore was cemented on defense.

In 2004, when the Patriots won their second straight Super Bowl and third in four seasons, a slew of injuries decimated the team at cornerback, and Brown became a defensive back. He was the nickel corner for the final nine games of the regular season and all three playoff games. Brown finished with three interceptions and became the first player in team history to record an interception and a reception in the same game, picking off former teammate Drew Bledsoe in a 29-6 win over the Buffalo Bills.

Brown, who said he used to tease Ty Law about being able to play defensive back, said he was sitting at his locker during training camp in 2004 when secondary coach Eric Mangini dropped a defensive playbook in his lap, telling him he was going to practice at defensive back.

"He came in and said, 'You always said you wanted to play defensive back and you can do it, so here's your chance.' I'll tell you, that first day was pretty bad," said Brown. "[Former offensive coordinator] Charlie Weis came in after practice - he wasn't happy because he wasn't fond of me playing defense because it was taking away from his offensive guys - he said, 'I guess that was the end of that deal.' It was pretty ugly. Every guy on the team toasted me and beat me up pretty bad."

Brown reprised his role in 2005 and 2006, when injuries hit the Patriots again.

But Brown wasn't just a jack-of-all-trades. He was a reliable receiver.

The longest catch of his career delivered one of the team's most memorable victories in 2002. Brown's 82-yard touchdown in overtime against the Miami Dolphins in October 2003 gave the Patriots their first win at Miami in the months of September or October.

"Nobody thought Troy could go deep," said coach Bill Belichick, who said the play was called 130 Gap Slant. "Nobody thought he could make the big plays, but all he did was make plays. He just kept making them."

And they were usually clutch.

There was the incredible catch he made flat on his back against the New York Giants in the season finale in 1996, helping the Patriots secure the AFC East title and a first-round bye on their way to Super Bowl XXXI, the heads-up lateral to Antwan Harris that turned a blocked field goal into a touchdown in the 2001 AFC title game against the Pittsburgh Steelers, the 23-yard reception that helped set up Adam Vinatieri's winner in Super Bowl XXXVI.

But perhaps the play that defined Brown's career was his never-say-die strip of San Diego Chargers safety Marlon McCree, following a fourth-quarter interception, in a 2006 AFC Division playoff game at San Diego that paved the way for an improbable comeback victory.

For a player who never gave up on a play during his career, letting go of the game wasn't easy. That's why it took Brown so long to make his retirement official.

Brown, who played in just one game with no catches last year after opening the season on the physically unable to perform list, said he was tempted to accept the Jets' offer of one more year of NFL life, but in the end it just didn't feel right.

"It's hard, it's tough. I would give anything in the world to be able to put those pads on again and do it," said Brown. "I probably had the opportunity to do it, but it just wasn't the right color. I didn't think I looked good in green and white again. It will be the only colors you'll ever see on my back as a football player - the red, white, and blue of the New England Patriots. I'm proud to say that, and thank you guys for all the great memories you provided. It's been a wonderful ride."