Panel of experts interprets the signs 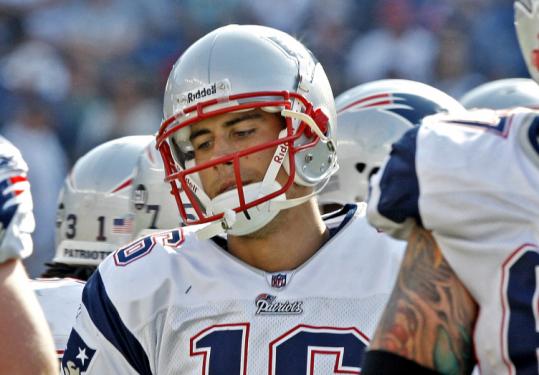 It's his team to run, and NFL observers agree that quarterback Matt Cassel has been put in a tough position this season. (Jim Davis/Globe Staff)
By Mike Reiss Globe Staff / September 24, 2008
Text size – +

We've gathered six people with strong NFL roots - from the ranks of former players, to coaches, to personnel executives - and asked them about the Patriots.

Coming off a 38-13 loss to the Dolphins and entering their bye week, the Patriots are in regroup mode, and our participants touched on some of the team's more pressing issues.

Some see early signs of trouble. Others believe it's too early to make any judgments.

"I think the biggest thing I see is that they can't dictate the tempo anymore," says Mike Lombardi, the longtime NFL executive who most recently helped oversee the Raiders personnel department and now provides analysis on nationalfootballpost.com.

So from Lombardi's view, the team needs to continue to reinvent itself.

"It's hard to do on the fly, and each week presents a different uniqueness they have to deal with," he says. "The other thing is that they're a target. Everybody has spent all of their offseason preparing for them. Now the Patriots are going to have to spend more of their time trying to find a way to modify and control the tempo of the game.

"That's the one thing that the coaching staff and organization have done a magnificent job of - having an ability to make the tempo their own."

The Patriots found the tempo that suited them in their 19-10 win over the Jets in Week 2, turning the game into a quick-paced (2 hours 41 minutes), defensive-minded contest. But the tempo was nowhere to be found this past Sunday against the Dolphins.

Much of that traces directly to the quarterback spot, where Matt Cassel has stepped in for the injured Tom Brady.

"What I see is that they have reined in Matt a bit," says former Denver Broncos general manager Ted Sundquist, who now provides analysis for profootballtalk.com. "Quarterbacks can be funny guys; they find their favorite receiver, the guy that they're most comfortable with, and they tend to home in on them.

"Right now, they can't get the ball downfield to Randy [Moss], and that was such a huge part of their offense last year. He was such an explosive and deep-ball guy, and Tom was so comfortable and confident in doing it. I also think their lack of being able to establish a really good run game to take some of the pressure off Matt is immense."

Super Bowl-winning quarterback Joe Theismann concurs that the quarterback spot is a fair place to start.

"It's basically been three weeks of someone trying to fit in," he says. "To me, I don't think Matt Cassel is that bad of a football player. He throws the ball around pretty good.

"But let's face it, so much of what the New England offense was about was scoring points, and by scoring points they allowed the defense to do certain things. Now they're in 60-minute football games.

"There is no doubt they miss Tom. When Tom took a snap, it was like Michael Jordan going up for a jumper. You expected Michael to make it, and you expected something good to happen with Tom."

But there are more issues than the quarterback spot, and Theismann pointed to "exceptionally poor tackling in the secondary" against the Dolphins as one of them.

Solomon Wilcots, who was the analyst for CBS's broadcast Sunday and also is a host on Sirius NFL Radio, focuses on the offensive line.

"That's the area I'd be concerned about, because while the Dolphins might have got the Patriots with a tricky offense, there was no tricking them in that area. Joey Porter said they were going to come after them and they came after them," says Wilcots, referring to the Dolphins' success with a four-man rush (Miami blitzed only a handful of times).

"I go back to Tom Brady in the Super Bowl; you get him beat up like that, you're not going to win. They got Matt Cassel beat up the same way [Sunday] and they couldn't block Joey Porter.

"The strength of the line is in the pack, but as we saw in the Super Bowl, when the pack is divided and you can get some isolations, they can struggle a bit. I think more and more opponents are going to look at this offensive line now. They couldn't get the running game going and because of that, they couldn't force a safety to come down in the box. That took away what they could do in the passing game, which meant no explosive plays for the offense."

Longtime NFL defensive coordinator Steve Sidwell, who is now retired and lives in Massachusetts, predicts the Patriots will "get their problems straightened out."

"Obviously, offensively they're not as potent a team because they don't have their starting quarterback," he says. "[Cassel] isn't as accurate. But their huge problem in the last game - and I don't foresee it happening again - is that they couldn't stop the run. Any time you have those problems, it makes it incredibly difficult.

"They're 2-1 now and I know the New England way is to panic and try to seek answers at times that are inappropriate, but that's a question to answer halfway through the season, when you might be able to tell what kind of team they are. There is no reason to believe they won't be a good team at this time."

Others, however, believe the early part of the season can provide telling clues. Former Patriots tight end Christian Fauria (2002-05) recalls how coach Bill Belichick emphasized the importance of the current time on the NFL calendar.

"There are a lot of them for them right now. The thing that stands out to me is just the inconsistency. You see them play a great game against the Jets, then a poor game against the Dolphins, and to be up and down - even going back to the preseason - is an early troubling sign to me. It reminds me a little bit of the way we were [in 2005].

"The best thing, at this point, is that they have an early bye week. They have a good two weeks to really fix it and nail it down if they want to make a run at it."

As for where things head from here, few are counting the Patriots out.

"I still think they'll win 10 games," says Wilcots. "I think their demise has been greatly exaggerated, even after that game."

Adds Theismann, "I still think they're going to win the division."

"I still think they can be a good team but they have to get away from the up-and-down thing," says Fauria. "If they don't, will you have a Super Bowl team? It's highly doubtful."

Sidwell, on the other hand, believes any talk about the Patriots' future should be flagged for a false-start penalty. Instead, it's all about a shorter-term focus.

"The problem to me is that last year they spoiled everyone with the greatest season in pro football history. Now, everybody is worried that they're not going to be that," he says. "It's way too early to make any judgments on what type of team they're going to have. My guess is that they'll be one of the better teams in the league."

Mike Reiss can be reached at mreiss@globe.com