Not easy to get rid of 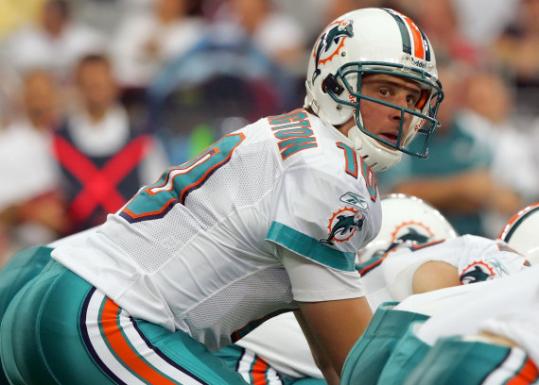 It's a different uniform, but Chad Pennington gets to face some familiar old foes in the AFC East. (Lisa blumenfeld/Getty Images)
By Michael Vega Globe Staff / September 18, 2008
Text size – +

FOXBOROUGH - Chad Pennington said nothing surprised him. After all, when one spends eight years as the quarterback of the J-E-T-S, Jets! Jets! Jets!, one tends to become wise - and thick-skinned, too - to the ways of the National Football League.

In New York, Pennington knew they were capable of loving you one minute, but the next?

They're introducing Brett Favre as your successor.

"With the two weeks leading up to the decision being made, I had prepared myself," Pennington said yesterday via conference call. "I felt like I was prepared both mentally and physically for whatever came my way. Once the decision was made, then I had to take a look at what was best for me as a professional and also for my family and being able to make a sound, professional decision."

Once the Jets ended the summer's biggest soap opera by waiving Pennington Aug. 7 to make room for Favre, the Dolphins added their own twist the next day when they kept the 32-year-old former Marshall standout in the AFC East by signing Pennington to a two-year deal. Miami's first-year coach, Tony Sparano, installed the veteran as his starter Aug. 25 after Pennington completed 16 of 21 passes for 149 yards with a touchdown and no interceptions in his first two exhibition outings.

"I just felt like coming to Miami and being able to help lay the groundwork and build the foundation for what Coach Sparano wants to do, I was interested in that opportunity and excited about it," said Pennington, who will start ahead of rookie Chad Henne, a second-round draft choice out of Michigan, and second-year man John Beck when the 0-2 Dolphins visit Gillette Stadium Sunday to face the 2-0 Patriots.

"I'm sure he'll help them a lot," Patriots coach Bill Belichick said of Pennington. "I've always been impressed with Chad ever since he came into the league. I think he's a really smart quarterback, very accurate, good decision maker, and can manage a game and run the team exceptionally well. I thought that he was not going to be in the division when the Jets released him and then it turned out he was in the division. We've still got to face him twice a year."

Asked yesterday about his adjustment to the new offense, Pennington replied, "It's exactly that, it's an adjustment. This will be my sixth week here and I'm learning every day, trying to acquire more knowledge and gain more insight into our offense and trying to execute it better and do as much as I can to get better at it. It's been a good adjustment, but it also has been different, so I'm trying to get through it."

But Pennington, like many of the 27 new faces the Dolphins brought in this season after their hideous 1-15 record a year ago, has been a work in progress, relying less on his football instinct and more on his command of the offense.

"He's come along really nice that way," Sparano said. "Certainly from an offensive standpoint, our offense has slowed down tremendously for him. From a mental standpoint, he's handled it really well now and he understands everything we need him to understand for him to go out and function without having any hiccups in the game plan."

That much becomes evident when Pennington is asked about the reason he's been prone to throw often to his tight ends, with Anthony Fasano (eight catches, 84 yards) and David Martin (seven catches, 85 yards) first and tied for second, respectively, in receptions on the team.

"It's just been who's been open and where the single coverage has been," Pennington said. "I think we have two tight ends that do a great job of getting open and finding areas, and so the coverage as far as the single one-on-ones have been with the tight ends and that's where the ball has been dictated to go.

"I just try to take each read as its own entity and get the ball to the open guy and not get focused in on one guy."

Pennington had no such concerns at Marshall, where Randy Moss was his primary target.

"As far as a friend, he's always been a good friend and I think he has a big heart. Through the years, he's come back to southern West Virginia and done a lot of great things there and really given back, so he really does have a big heart."

So it came as no surprise to Pennington that Moss was elected a Patriots captain this season. "I think it would surprise other people, but I've known Randy for a while, and I've known the true Randy and I think some people's perception of the true Randy is a little off, as far as knowing Randy in his heart," Pennington said.

As for Pennington? He intends to keep slinging it, just like he did when he was in New York.

"Chad, he's made all types of passes, short to intermediate and some deep passes, throughout his career," said Patriots safety Rodney Harrison. "I don't think just because he changes the jersey on his back that that's going to change. He's still a competitive guy and he's still a smart quarterback with a very accurate arm. So, I don't think it's going to change anything he's going to do just because he's wearing a Miami Dolphins jersey."