Patriot passing game has been short and sweet 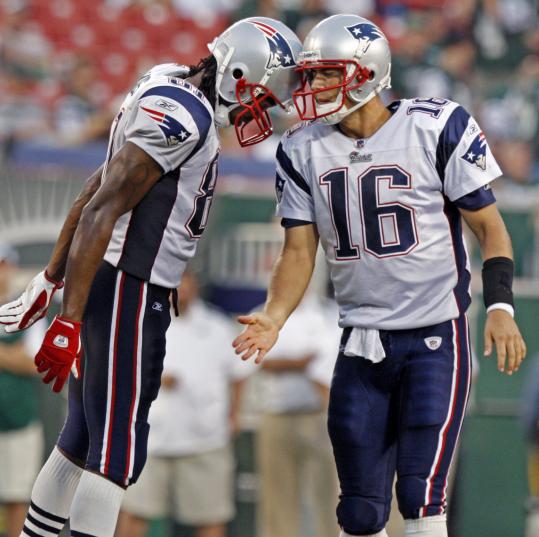 Randy Moss and Matt Cassel put their heads together as time was winding down in Sunday's win over the Jets, but they haven't hooked up much with the football through the first two games. (Jim Davis/Globe Staff)
By Mike Reiss Globe Staff / September 17, 2008
Text size – +

The official stat sheet indicates that the Patriots had 165 passing yards and another 104 rushing in Sunday's 19-10 win over the Jets, but if former offensive coordinator Charlie Weis were still working around these parts, his scorecard would read differently. The rushing total would be higher.

It's not that Weis would have called more running plays than his successor, Josh McDaniels. Instead, it's about what Weis often defined as a running play.

Weis loved the wide receiver screen, that innocent pass to the outer edges of the field that must be delivered quickly after the snap. While the play is technically considered a pass, Weis often referred to it as a glorified run because it served the same purpose as a handoff - except that the running comes against the perimeter of the defense, not at the line of scrimmage, and with a receiver doing the running, not a back.

The Patriots had considerable success with the receiver screen on Sunday, going 4 of 4 for 43 yards, the quick and fearless Wes Welker on the receiving end of each delivery.

So if Weis were keeping score, the Patriots would have had 122 passing yards and 147 rushing yards in Sunday's win. His scorecard also would have dropped the team's pass attempts to 19 and increased the total rushes to 37.

The numbers reflect how the Patriots played more horizontal "small ball" against the Jets, favoring runs and shorter passes than the vertical aerial attack that often defined them in 2007.

Now the question is whether this is a one-game deal, or if the Patriots will be morphing into an offense that is the antithesis of their stretch-the-field approach that set records last season.

"I'm no offensive coordinator by any stretch of the imagination, and I don't even know the offensive game plan, but I do know that Tom would maybe throw it 50 times a game, and this was different than what we had with Tom and all those big-time receivers," defensive end Richard Seymour said. "Maybe Matt leads into that."

A breakdown of Cassel's 23 pass attempts Sunday reveals that he had just four throws that were 10 yards or longer from the line of scrimmage. He was 1 of 4 on those attempts, the lone connection a 14-yard strike to Randy Moss on a crucial fourth-quarter drive.

Cassel, as is the case with most quarterbacks, was most efficient while operating closest to the line of scrimmage.

Five of his passes were actually behind the line of scrimmage - the four receiver screens to Welker, and a 22-yard screen to running back Kevin Faulk that set up the team's lone touchdown. When throwing 0 to 5 yards, Cassel was generally on the money as well, going 7 of 10. He was 3 of 4 on passes that were 6 to 10 yards beyond the line of scrimmage.

What the numbers illustrate is that the Patriots excelled in the yards-after-catch category, gaining an eye-opening 123 yards.

That's a credit to Cassel for delivering the ball accurately and on time, which allowed his pass-catchers to shift quickly into high gear. It's also a credit to the pass-catchers themselves for becoming hard-charging and elusive running backs after the short receptions, as well as the blockers. The Jets' poor positioning and tackling also was a factor.

Welker, with 68 yards-after-catch Sunday, has become one of the NFL's most lethal YACers by combining quickness, strength, and vision in a player just 5 feet 9 inches and 185 pounds.

"He has good balance and he's a hard guy to wrap up and tackle," said coach Bill Belichick, "similar but different than Troy Brown, who was another smaller type of guy who was hard to tackle because he could make people miss and bounce off some tackles because of his size, lower-body strength, and balance.

"I think Wes does a good job of finding where there is a soft spot on defense and getting what's there."

He certainly gashed the Jets, who seemed more concerned with double-teaming Moss in the deeper parts of the field. That's often the dilemma that defenses face against the Patriots: If you take away Moss deep, it leaves more room for Welker short, but if you take away Welker short, then Moss can be a lethal threat deep.

On Sunday, Cassel proved he can be effective in the short game, and it helped that the Patriots jumped out to an early lead so downfield throws weren't a necessity.

In terms of the long-range passing game, Cassel did have the big 51-yard hookup to Moss in the season opener, and his 14-yard connection to Moss on the first play after the Jets closed to 16-10 sparked what may have been the team's most important drive of the game.

Still, there remains some question how he will consistently fare when the Patriots need to go the longer route.

This week's game against the Dolphins could provide some answers, as Miami's secondary was chewed apart deep in a 31-10 loss to the Cardinals Sunday.