After years as a backup, he hands off clipboard 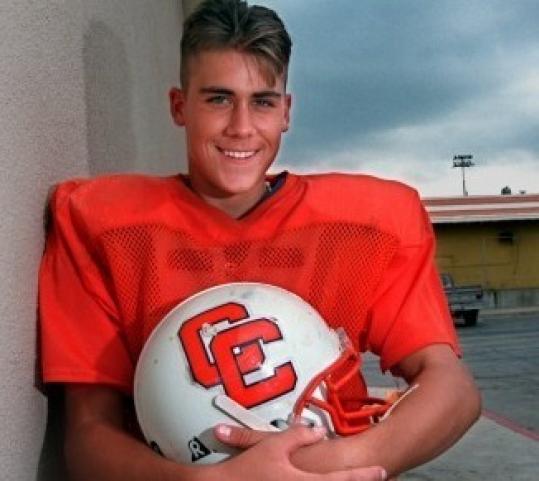 NORTHRIDGE, Calif. - At 4:31 a.m. on Jan. 17, 1994, Matt Cassel jolted awake at the epicenter of a monstrous earthquake that ripped apart his home and sent the water from his family's inground pool crashing through the glass doors of the room where the 11-year-old Cassel and his 13-year-old brother, Jack, were sleeping.

Drenched amid the jagged debris, the boys picked themselves up from the cold, soggy carpet and began searching for their parents and two siblings in the near-total darkness, the only light generated by fires from the neighborhood's ruptured gas lines.

The Cassel brothers found their father, Greg, pinned under a fallen marble column, moaning. As if they had trained their entire lives for the disaster - the Northridge earthquake claimed 72 lives, injured thousands, and caused an estimated $25 billion in property damage - the boys methodically wrenched the column from their father's legs and pressed on to ensure the rest of the family's safety.

"Once we knew what hit us, we said, 'What's next?' " said Jack Cassel, now a pitcher for the Houston Astros. "We prioritized what had to be done and did it."

That, according to those who know him best, is the Matt Cassel - poised, prepared, and even-keeled even in moments of maximum stress - who today will confront one of the rarest challenges in NFL history.

Nearly nine years removed from starting his last game as a quarterback - at 17, for the Chatsworth High School Chancellors - Cassel has been summoned from football limbo to replace a legend, the injured Tom Brady, and attempt to guide the Patriots to their fourth Super Bowl title in seven years.

Or at least to the playoffs - many Pats fans, who foresaw disaster when Brady went down holding his ripped up knee last Sunday, would settle for that.

One of the longest-running understudies in professional sports, Cassel will debut in a dream matchup against Brett Favre, a quarterback he once emulated, and the New York Jets at Giants Stadium.

"Matt will be ready, just like he was when the earthquake hit," Greg Cassel said at his home in San Bernardino as the sun set on the mountains beyond him. "My boys are fearless. There's no quit in them."

Matt Cassel has trained a lifetime for this moment, his family and friends said. From his childhood days on his family's tiny ranch, he has been on intimate terms with adversity - first in the earthquake and its aftermath, then through his parents' divorce, then the years of fighting for a sense of dignity and purpose as a perpetual backup to star quarterbacks Carson Palmer and Matt Leinart at the University of Southern California before he entered Brady's shadow. Through it all, Cassel has always kept his head up.

"You can't dampen his spirit," USC coach Pete Carroll said on the team's practice field. "He's so optimistic and positive, and such a stud in regards to perseverance. He's the epitome of it."

Though Cassel arrives untested in his first start today - doubts about his ability have prompted some oddsmakers to drop the Patriots from Super Bowl favorites to relative long shots - he has convinced both Carroll and New England coach Bill Belichick he was worthy of the role.

"Look what he's done, waiting all these years behind the best quarterbacks in America," Carroll said. "He will take full advantage of this and compete his butt off."

There is, it seems, grit in his DNA. His great-grandfather, R.G. Cassel, was a Texas Ranger, and his grandfather, Joe B. Cassel, won the Distinguished Flying Cross as a B-17 bomber pilot in World War II before he bred horses at his Casa Cassel Arabians Ranch and was inducted into the Texas Horse Racing Hall of Fame.

Cassel's father is a longtime Hollywood script writer who never hit it big but kept trying, even after he launched a second career as a horse trainer. Cassel's mother, Barbara, is herself a profile in tenacity. After she and Greg divorced in 1996, she raised their four children and worked full time as a Hollywood set decorator.

Barbara Cassel was rewarded not only with the joy of watching her children thrive but winning an Emmy last year for helping to stage the television special, "Tony Bennett: An American Classic." She also has worked on the television hit "Without A Trace."

Barbara, whose youngest child, Amanda, is a senior at Long Beach State University, declined to be interviewed, preferring that her son receive the recognition.

The Cassels have come far from their early years on a 4-acre ranch at the foot of California's Santa Susana Mountains. As young boys, Matt and his brothers rose with the sun to fill wheelbarrows with hay to feed the horses. When their half-mile dirt road grew too muddy to drive, Matt and Jack rode horseback to elementary school. And when their mother was stranded down the road with the groceries on rainy days, the boys met her with an extra horse and umbrella, and draped the grocery bags over their saddle horn for the ride home.

Good athletes, too. At 7, Matt quarterbacked an unbeaten Pop Warner team. At 12, he helped lead his Northridge Little League team to the finals of the 1994 World Series, where the boys lost to Venezuela but won hearts across the nation as "The Earthquake Kids." Most of the Northridge families, like the Cassels, were left homeless by the quake. The aftermath, Greg said, "looked like the apocalypse." The families bounced for months from hotels to rental properties.

"Sports was our relief," Justin said.

Matt was 14 when his parents divorced amid a period of financial strife in which they briefly sought bankruptcy protection. Greg said he created the economic stress by committing "the cardinal sin of putting all our money" into an unsuccessful movie project. "I lost a ton of money," he said.

Barbara and the children generally maintained the lifestyle they led before the divorce.

"It was a difficult time for them," said George Saul, Matt's youth baseball coach. "But Barbara is a very solid person. She was always there for the kids."

Greg, who was instrumental in coaching and raising the children before the divorce, has remained influential in his sons' lives and has been available to his daughter.

"Our parents had their problems, like people do all over the country," Justin said. "It's a credit to them that they never let the problems filter down to us."

A two-sport star in high school, Matt quarterbacked Chatsworth to the city divisional football championship at the Los Angeles Coliseum in 1998. The next spring, as a designated hitter, he led Chatsworth's baseball team to victory in the city championship game at Dodger Stadium.

An exceptional student athlete, Cassel was recruited by football coaches nationwide, from the Ivy League to top 20 powers. He opted for Southern Cal, believing he would inherit the starting job from Palmer. But Carroll decided otherwise. On the final day before a spring game in 2003, Carroll chose Leinart over Cassel.

"It was dead even at the time," Carroll said. "We just wrestled with it and went with Leinart, and he never looked back."

Cassel, who was too busy this week to grant an interview, has never publicly complained about his years on the sidelines.

"Some people said he was getting the short end of the stick, but he kept his mouth shut and kept working hard," Justin said.

Indeed, Cassel agreed to fill other roles for USC, including playing on special teams, which led to his lone college highlight. With UCLA staging a late comeback against the No. 1 Trojans in 2004, Cassel recovered an onside kick to help clinch a 29-24 victory.

Cassel drew the line, however, at Carroll's request for him to play tight end. At 6 feet 4 inches and 220 pounds, Cassel was easy prey for bone-crushing defenders, prompting his father to tell him, "Look, you're going to get killed out there. You're going to leave this school the way you came in, as a quarterback.' "

Carroll acknowledged last week that Cassel "got his head knocked in" during the brief experiment.

Instead, Cassel decided to play a second sport and returned to baseball after a three-year hiatus. He pitched just long enough at USC - he went 0-1 with a 9.35 ERA in eight appearances - for Carroll to nickname him "Wild Thing." Yet the Oakland A's saw enough to select Cassell in the 36th round of the 2004 draft.

His football dreams, meanwhile, were slipping away. NFL scouts had no interest in an unproven clipboard holder, even one who had backed up two Heisman Trophy winners - not until Cassel commanded their attention. In USC's annual "pro day" showcase in 2005, he wowed the scouts with a sensational performance. As they converged on him afterward, his mother wept in joy.

The Patriots selected him soon after in the seventh round of the 2005 draft.

"He never would have gotten drafted if it wasn't for that workout," Carroll said.

Cassel also left USC with his future wife, Lauren Killian, who captained the women's volleyball team to the 2002 national championship (Palmer was best man at their wedding). Cassel found his brother, Jack, a wife as well: Julie Mariani, Lauren's USC roommate and teammate.

Today Matt will attempt to duplicate the success he had last Sunday, when he stepped in for Brady and guided the Patriots from a scoreless tie in the first quarter to a 17-10 victory over the Kansas City Chiefs. Cassel's performance eased concerns about his readiness after he failed to dazzle in four exhibition games.

Cassel is in the final season of a four-year, $1.5 million contract, and his father had encouraged him over the summer to step up his game in anticipation of becoming a free agent after the season.

Greg Cassel believes in his son. So do Belichick and the Patriots. So, too, does Jack Cassel, who has watched his brother confront life's challenges.

"To be honest, it's similar to what we did in the earthquake," Jack said. "Now, it's Matt's time to step up. His number has been called, and we have the utmost confidence he's going to do the job."