Crable, Redd are learning on job 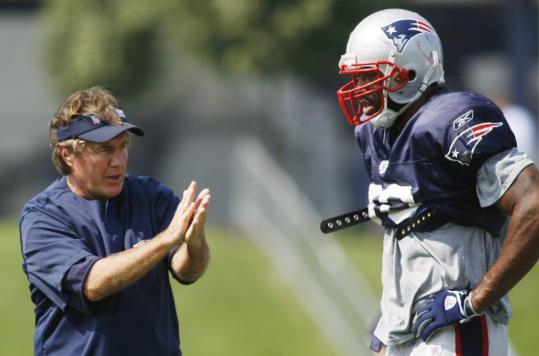 FOXBOROUGH - Shawn Crable did not mince words when asked when it all struck him. When he realized he was no longer in Ann playing for Michigan but ready to embark on his professional career as an outside linebacker with the Patriots.

"The first day," Crable said with a chuckle yesterday. "The first time we got on the field and hit, my brain was going a thousand miles an hour. Everyone was telling me, 'Calm down! Just calm down!' but everything was fast out there. Everyone was just moving. I think the first day you find out that there's a lot of stuff you've got to work on."

And there's even more to learn.

If Crable, a third-round draft choice (78th overall), and fellow rookie outside linebacker Vince Redd, an undrafted free agent out of Liberty who was signed May 2, hope to land a spot on the roster, their absorption of the 3-4 scheme will have to bear tangible results, not just on the practice field but in preseason games such as Friday night's exercise against the Philadelphia Eagles at Gillette Stadium.

So far, Crable and Redd have proven quick studies who have had the shared experience of finding their niche as outside linebacker/defensive end hybrids who fit the mold in a 3-4 scheme.

"Vince played at the University of Virginia and looks like an outside linebacker in a 3-4 system, kind of a cross between a defensive end and a pure outside linebacker," said coach Bill Belichick. "He played well at Liberty. He's a strong kid and runs well for his size and he's a smart kid and he has played at a high level of competition at Virginia, even though he transferred to Liberty."

"Shawn played down a lot at Michigan and rushed a lot sometimes as a defensive end, sometimes as an outside linebacker," Belichick said. "But they did play a system similar to ours that is coached by a coach [Steve Szabo] who was in our system. You could watch [Crable] play and see him do a lot of the things that we do and have a good way of evaluating it.

"With a lot of these defensive end guys like [Mike] Vrabel, [Rosevelt] Colvin, and [Willie] McGinest and guys like that, through the years, that's where they played. In Shawn's case, you could actually see him play outside linebacker and play on his feet.

That has been evident in the two preseason games.

In a 27-10 loss at Tampa Bay Sunday night, Crable's play resulted in one of the few defensive highlights when the 6-foot-5-inch, 247-pounder recorded a sack and a forced fumble on the same play against Chris Simms. It led to a Buccaneers punt that set up the Patriots' lone touchdown.

In the preseason opener against Baltimore, a 16-15 loss, Crable intercepted Ravens quarterback Kyle Boller and returned the ball 11 yards, marking his first pick since his playing days at Washington High in Massillon, Ohio.

Redd, meanwhile, was credited with an unassisted tackle and a pass breakup on a fourth-and-1 attempt against the Ravens.

"We lost, I know that, so it was not that good," Redd said of his play against Baltimore. "But all these games are learning experiences and you've just got to take the criticism from the coaches and understand what you should have done and what you could've done better, so the next time you go out there you can do those things."

"I feel like there's a lot of things I need to learn about what to do with your hands and how to learn technique and stuff like that. I feel like I'm learning a lot about the position, but I don't know if I'm totally comfortable."

Crable laughed, nervously. After all, he is a rookie, and rookies are usually the most uncomfortable players in an NFL camp, especially with the first cut-down date looming Tuesday, when teams must pare rosters from 80 to 75.

And so Crable and Redd will continue to learn and absorb and perform in the hopes that the sage advice of veterans and their football instincts will be enough to get them through camp.

"Just the speed is different," Crable said. "Then there's recognition and remembering your assignments, because there's a lot of different checks and things like that than there was in college.

"So I think the mental part is the biggest issue. The physical part, you find out quickly whether you can play here or not. So the mental is what'll keep you in or out of it.