Throwing hats into the ring

Three bid to back up Brady with Patriots FOXBOROUGH - Yesterday was Tom Brady's 31st birthday. Time stops for no one, not even the golden boy with the NFL MVP arm. At some point, Brady will have to be replaced. It's an NFL inevitability.

The question the Patriots are trying to answer is whether No. 12's heir apparent - or air apparent - is on the roster.

Thursday night's exhibition opener against the Baltimore Ravens could be the first clue to the long-term quarterback picture and reveal who has the upper hand in one of the more interesting, yet somewhat irrelevant, position competitions in camp.

The contestants to back up Brady and serve as his someday successor are fourth-year veteran Matt Cassel, second-year man Matt Gutierrez, and rookie third-round pick Kevin O'Connell. Like Brady, they're all California-bred quarterbacks, but that's about all they have in common with Brady at this point.

Cassel, Brady's incumbent understudy, has had his ups and downs.

He played in a career-high six games last season, but the indelible mark Cassel left was being yanked from a blowout win over the Dolphins after he threw a pass that Jason Taylor intercepted and returned for a touchdown.

Gutierrez made the team as an undrafted free agent last year, and like Brady is a San Francisco Bay Area quarterback who went to Michigan and was supplanted by a highly-touted recruit. While Brady stayed at Michigan, Gutierrez transferred to Idaho State. It was in his second year that Brady made a quantum leap and supplanted Drew Bledsoe. Gutierrez won't jump that far, but he could overtake Cassel.

O'Connell, the newcomer out of San Diego State, was a surprise pick, few expecting a team with Brady to use such a high pick (No. 94 overall) on a quarterback. The Carlsbad, Calif., native caught the eye of offensive coordinator Josh McDaniels, who worked out O'Connell before the draft.

"That group has been great. They've been great to work with," said Patriots coach Bill Belichick. "Matt [Cassel] has had a good camp. He's had a real good offseason. He did a nice job in the spring. [Gutierrez] is as probably as hard a working player as we have on this team. He's worked hard to get better and build off of last year.

"Kevin has made a lot of improvement from the spring . . . He seems a lot more comfortable and confident. He's playing quicker at the line of scrimmage than what he was in the spring."

For Cassel, whose contract is up after this season, this could be a make-or-break year. Like all backups, the 26-year-old yearns to run his own team - he's been a backup since his days at Southern California - but the quickest way into a starting job is to prove you're a better-than-average understudy.

Cassel has shown flashes in past exhibition games and with Brady routinely taking practices off, has been the one who has taken the No. 1 reps when Brady sits. He figures to get the first crack at the Ravens Thursday night.

"I'm confident that Matt - this is his fourth year - has got a pretty good understanding of what we're doing, and he's done a pretty good job of it when he's gotten an opportunity to play," said Belichick.

O'Connell, 23, is more of a long-term project. Few expect him to ascend to backup status this season, just sit and learn. Still, O'Connell, who said during spring camps his goal was simply to call the right play, said he's eager to show what he's learned in a game setting.

"For the most part, a lot of us young guys, this will be our chance to kind of get out there and kind of play without holding anything back, so we're all looking forward to it," said O'Connell.

The player with the most to lose or gain in this derby appears to be Gutierrez. He could either find himself challenging Cassel to back up Brady or fighting O'Connell for a roster spot.

Gutierrez, 24, isn't putting any extra pressure on himself.

"I think the biggest thing is to compete against yourself," said Gutierrez. "It's not personal with the other guy. I think we're all trying to see how well we can do and how quickly we can progress here."

But even Belichick said he was intrigued to see Gutierrez's progress in a game environment. The same goes for O'Connell.

The one certainty at the quarterback position is that Brady's job isn't on the line. Some day Father Time will come calling for Brady, but right now he's in the prime of his career. That leaves three quarterbacks fighting for two spots in all likelihood. Befitting the birthplace of all the backup QB hopefuls, Gutierrez took a laid-back approach to that grim roster reality.

"I don't think it's something that we can worry about," he said. "We just come out here and try to get better every day and whatever is supposed to happen will happen." 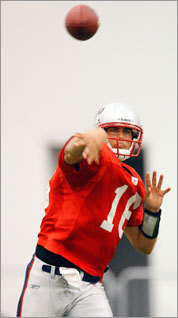