This receiver was a fine catch 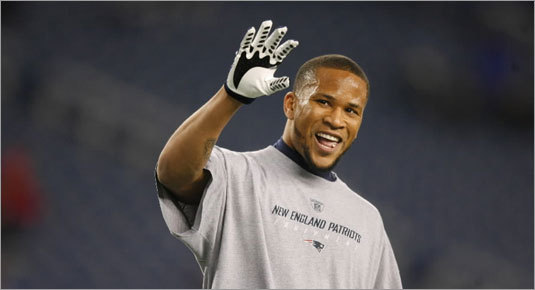 FOXBOROUGH - Randy Moss didn't practice yesterday. Wes Welker remains sidelined on the physically unable to perform list. However, the Patriots still had a wide receiver they trust with the game on the line on the field at training camp.

Jabar Gaffney may be the forgotten man when it comes to the wide receiving corps, but Bill Belichick and Tom Brady appreciate the understated but sure-handed wide receiver.

A reliable route runner with the versatility to play any of the Patriots' receiver spots, Gaffney has carved out a place in the offense since joining the team as an in-season free agent pickup in 2006.

"Quarterbacks trust him a lot because they know where's he's going to be. He's a very dependable guy," said Belichick. "I think that dependability comes from his total makeup. He's not an up-and-down guy, so you pretty much get the same performance every practice, every drill, every game.

"When he gets an opportunity to be productive and make plays, you can count on him to make them. He's done that for a year and a half now. He's doing the same thing in camp."

The 27-year-old Gaffney had a career-high five touchdown receptions last season and finished with 36 catches for 449 yards. He had arguably the biggest catch of the season, hauling in an 8-yard TD reception with 44 seconds left to lift the Patriots to a 27-24 victory over the Baltimore Ravens in a memorable Monday Night Football game.

Now in his seventh NFL season, the 6-foot-1-inch, 205-pounder, who played four seasons for the Houston Texans and was released by the Philadelphia Eagles prior to signing with the Patriots, said he appreciated the opportunity the Patriots have given him.

"I always tried to make it work. When I was in Houston, I made it work. Whenever they threw me the ball I caught it," said Gaffney. "There was just a thing where Andre Johnson got more passes than I got, so it wasn't like I wasn't doing anything in Houston, and Philly was Philly. I left Houston trying to get another start and that happened. I guess this was where I was supposed to end up."

Gaffney might not have the name recognition of Moss or Welker, but the team has faith in him.

"They put me in and once they gained that trust in me, I've been able to make plays and I'm going to try to keep making plays whenever they come to me," said Gaffney.

All have received extra reps because of the absence of Ellis Hobbs, who remains on the PUP list after offseason shoulder and groin surgeries.

Bryant knocked down a pass intended for Chad Jackson yesterday and Belichick cited his ability to get his hands on balls.

"Most of the time I'm in the right position as far as the scheme and what they're asking me to do," said Bryant. "I don't guess a lot. Throughout my career that's one thing I've been consistent in doing, not a lot of picks, but I've always been in position to make plays on the ball."

Does Alexander feel this is a make-or-break season? "No, not necessarily. Everybody comes into training camp with a clean slate and everybody has the same opportunity to make the team," he said.

"I'm going to work hard, and I work hard everyday and whatever happens happens."

One of the pleasant surprises of camp has been veteran tight end Marcus Pollard. The long-time Colts target looked like he was about to call it a career after spending last season in Seattle, where he caught 28 passes for 273 yards and two touchdowns. However, the 36-year-old Pollard, who did not play college football, returned for a 14th NFL season when he got a call from Belichick.

"I didn't want to be done," said Pollard. "But in this day and age, like [Belichick] asked me, how many teams are calling you. I think Bill has done a great job with taking veteran players who a lot of guys think they are on their last leg and they are washed up and really making them good players."

Tight end David Thomas left practice under his own power with an apparent injury . . . Outside linebacker Pierre Woods came up gimpy after during a run-blocking drill, but stayed on the field and made the play of the day. He snared a Matt Cassel pass and returned it for a touchdown . . . Moss, Tedy Bruschi, Webster, Matt Light and rookie linebacker Vince Redd were absent from practice . . . The Patriots are planning to have a send-off tomorrow for linebacker Andre Tippett, who will be inducted into the Pro Football Hall of Fame Sunday. Tippett, who will be the fourth Patriots player to be enshrined in Canton, Ohio, will be at the team's practice from 2:30-4:30 p.m. . . . Belichick was happy to congratulate his friend Jon Bon Jovi, the majority co-owner of the Philadelphia Soul of the Arena Football League, on the team's victory in the ArenaBowl Sunday. The Soul defeated the San Jose SaberCats, 59-56, to win the Arena championship in just their fifth year of existence. 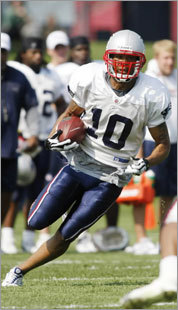