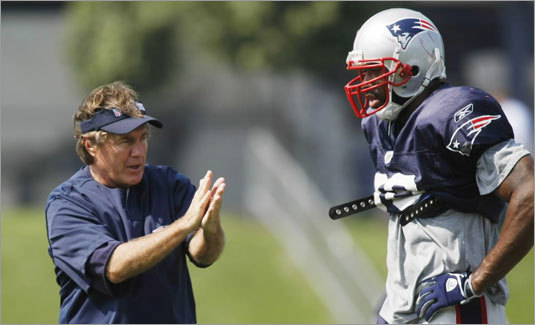 FOXBOROUGH - After the allegations, innuendo and intrigue, the lasting effect of the "Spygate" saga on the NFL has nothing to do with unsubstantiated Super Bowl subterfuge or the mystery of Matt Walsh. No, it will be inside the helmets of defensive players this season.

It was the Patriots' signal-stealing flap, unearthed last Sept. 9 when the team was caught filming the defensive signals of the New York Jets in the season opener, that paved the way for the adoption of defensive coach-to-defensive-player communication by the NFL for 2008. The rule did not gain passage in 2006, and in 2007 it fell two votes shy of the 24 needed for approval. The rule was voted in at the owners' meeting in April, hailed as an electronic antidote to the swiping of defensive signals.

NFL officials will be at Patriots training camp today for a briefing on all the rules changes for the upcoming season.

Quarterbacks have had headphones in their helmets since 1994, and that's what the defensive system is based on. Two defensive players will be designated by teams prior to each game to have radio receivers in their helmets, but only one can be on the field. The problem is that no defensive player directly correlates to the quarterback, as both play-caller and constant on-field presence. For that reason, among others, Bill Belichick thinks hand signals will still be a part of defensive communication this season.

"I think from the coaches that I've talked to in the league, the defensive coaches and the head coaches, everybody feels like you'd better be prepared to signal," said Belichick.

The Patriots have a complex defense of situational sub-packages with different personnel and schemes, making it more difficult to select defensive communicators than it is for teams such as the Baltimore Ravens and Chicago Bears, who have every-down middle linebackers in Ray Lewis and Brian Urlacher.

The most logical candidate for the Patriots is linebacker Tedy Bruschi, but Bruschi often came off the field on third down last season. Safety Rodney Harrison is another choice, but he would have to change helmets if Bruschi had the communication device and was substituted for.

"For some of the teams I've talked to they are thinking about the same kind of issues," said Belichick. "There are multiple considerations. On our end it will be a little bit of a trial-and-error type of thing."

Belichick acknowledged the Patriots might be better suited having a player who is likely going to be on the field for three downs.

One possibility is a cornerback. However, veteran Fernando Bryant said having a coach talking in his helmet would be more of a hindrance.

"It's not really something I would want to do," said Bryant. "I'm not a signal-caller. Corners most of the time are locked in. I think that would take something away from my game, as far as being focused on one side of the field and one receiver on that play. So, me, personally, I wouldn't want to do it."

Belichick acknowledged the potential for distraction.

"Quarterbacks have kind of gotten accustomed to getting the play call and getting stuff in their helmet and all that," he said. "You start doing that with other guys, and they're trying to think about what they're doing and they're hearing people talk to them in their headset all the time, so it's not easy."

These issues were raised by opponents of the rule.

The Patriots were not among the seven teams (Packers, Raiders, Eagles, Rams, Seahawks, Buccaneers, and Redskins) that voted against the rule, which had the backing of NFL commissioner Roger Goodell.

At the league meetings, Titans coach Jeff Fisher, the co-chairman of the Competition Committee, expressed confidence in the new system.

"We've thought through everything. It should go real smooth," he said.

That remains to be seen, but teams have the exhibition season to try to work out the kinks.

And the Patriots always have a contingency plan. The Patriots lost their coach-to-quarterback communication capability last season while playing at Indianapolis. Hand signals will still be memorized.

"I'm sure there is going to be a time where we are not going to be able to use that [radio system] for various reasons," said Belichick.

The Patriots will have to have a plan in place before their Aug. 7 preseason opener against the Baltimore Ravens, but Belichick likely won't address that situation until next week.

"We have enough to do to try to get ourselves straightened out with our normal stuff before we tackle something new," said Belichick. "We're going to try to make sure we have our basic installation in, substitution procedures and all that instead of adding another thing into the mix."