Brady enjoyed his space in offseason

After getting away from it all, QB is ready to go again

FOXBOROUGH - Tom Brady is parking his car elsewhere this season.

The iconic quarterback wasn't around Gillette Stadium as much during his downtime, so his preferred parking place, the one he's earned since his first offseason, now contains somebody else's car.

"I gave it up. I didn't compete for it," said Brady. "I'm sure if I would have competed I would have won, but I chose not to compete."

Brady, who turns 31 in August, may have ceded his coveted parking spot, awarded to those with the top attendance in the offseason program, but his passion for football is anything but vacant. That was apparent as he spoke yesterday following the Patriots' first official practice of training camp.

For all the publicity he gets, Brady is a private man, but it didn't take much reading between the lines to realize that after winning his first Most Valuable Player award last season, the offseason award he was trying to win this time was More Visible Parent.

"There are other things in my life that have come up that I've had to make choices on," said Brady. "One of the choices was to spend time away with the things I don't get the opportunity to do when I'm in football season. It's not a vacation. It wasn't all vacation."

Some time away from the field seemed to do Brady good. He was upbeat, affable, and eager to get to work. He reported his golden arm is fine, his mind is clear, and his much-discussed ankle, which hobbled him in the Patriots' perfection-preventing 17-14 loss to the New York Giants in Super Bowl XLII, is healthy.

Last year at this time, the question surrounding Brady was how would he bond with new receivers Randy Moss and Wes Welker. The answer was sublimely.

Brady threw an NFL-record 50 touchdown passes and led the league in passing yards with 4,806, the third-highest total in NFL history, while completing a career-high 68.9 percent of his passes.

The only question this year is whether Brady and the offense, which scored an NFL-record 589 points, can duplicate their production. Brady wouldn't take the bait on that one, but said the offense can build on last season's execution.

"Now, you get in the huddle and you tell Randy what to do and he knows exactly what you're going to do. He knows what I'm going to do. I know what he's going to do. The same with Wes and [Jabar Gaffney] and everybody."

Super Bowl XLII was Brady's first Super Bowl loss, and it left him with the same sickening feeling as the rest of his teammates.

Brady said that the whole team watched the tape of the game - just like they do any other - for edification.

No. 12 acknowledged the deflating feeling of defeat he had that fateful night in the desert resurfaced after watching the game, but he recited the team motto - he's moving on, not looking back.

Now, entering his ninth season, Brady needs less time to get ready for the schedule than he did in the past. He cut back his throwing in training camp last year to protect the shoulder that makes him an ever-present, if ersatz, presence on the team's injury report - he has started 127 straight games (including the playoffs).

He plans to do the same this year.

"Each year I've learned a little something different," said Brady. "I don't think the goal this year is to go out and see how sore my arm can get. I think for [me and] our team it's the same thing. The goal is to be ready to play in September."

Patriots coach Bill Belichick is never going to sign off on a player spending less time in the offseason program, but he's knows his quarterback doesn't take any shortcuts in his preparation.

And ultimately that was the message Brady sent on the first day of camp. That, like his team, he has a long way to go - both in the quest to get back to the Super Bowl and in his playing career.

"I really enjoyed the time with family and friends," he said. "I think I'm also anxious to get back because I love playing and I love competing. In March and April you're not so excited about football, but once June and July come you're anxious to get back, be with your teammates and start getting back to work." 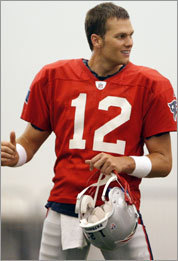