Welker getting kick out of it 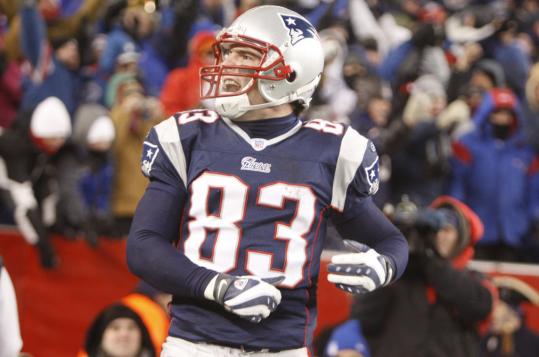 One part of the story speaks to how far Wes Welker has come in his NFL career. Another highlights how Randy Moss, entering his 11th season, remains in dogged pursuit of excellence.

What ties it all together is a soccer ball.

The story goes something like this: Over the course of his remarkable 112-catch season last year, Welker added a distinguished admirer to what has become a growing legion of boosters - Moss. The two were naturally spending a lot of time together as Patriots receivers, and it wasn't long before Moss started chatting up Welker on some of the finer points of his smooth route-running.

How do you get in and out of your cuts so efficiently while running full speed? What helps you find those creases in tight spaces, which is such a key in the NFL passing game these days? Tell me more about your footwork.

Welker shared with Moss that he believed his background in soccer was a big part of it. He started playing fútbol when he was 4 years old, and continued through his senior year at Heritage Hall High School in Oklahoma City.

Welker still keeps a soccer ball close by, and regularly uses it as part of his football training. He juggles it between his feet, not allowing it to touch the ground. Sometimes it's the simple skill of possessing the ball, on the ground, with the bottom of his feet. Or he'll dribble it between his feet as he surges up and down the field, focusing on short, quick cuts.

"I really feel that it's helped with my footwork, getting in and out of breaks, and it seems like I can take a bunch of little steps in a very quick amount of time," Welker said yesterday during a break from the Patriots' passing camp at Gillette Stadium.

"Your feet get put in some awkward positions in football, but I'm sort of used to that from playing soccer, from moving the ball around. I definitely think that's a big part of what has made me successful in the NFL."

Moss agrees. So impressed was he with what he saw from Welker last season, he's added his own soccer-specific drills to his training this offseason in Florida.

Moss and Welker have been reunited this week, but even before that Welker was impressed by what he saw from his soccer-playing teammate.

"We've kicked the ball around a little bit and I showed him some of the drills I've gone through," Welker said. "It's pretty impressive how he's gotten it in a short amount of time. He juggles it really well now, moves it around."

While Moss was unavailable for comment yesterday, the willingness to add new wrinkles to his training indicates he's not about to rest on his accomplishments, which included a 98-catch season in his first year with New England in 2007. Even after signing a three-year, $27 million deal in March, the 31-year-old Moss is seemingly as motivated as ever.

How the soccer-specific work could help Moss will be worth monitoring, mainly because his style of play is different from Welker's.

At 6 feet 4 inches, 210 pounds, he's more of a long strider, with top-end straight-line speed. While he has the ability to line up at all receiver positions, he's most often at one of the outside spots, where there can be less traffic.

The 5-9, 185-pound Welker, like Moss, can line up at all spots, but he's most often in the slot, closer to the line of scrimmage. That means he's often working the underneath areas of the defense, looking for what can sometimes seem like microscopic seams to give quarterback Tom Brady a window in which to throw.

Just the fact that Moss approached him was sort of a can't-believe-this moment for the 27-year-old Welker, who entered the league as a rookie free agent in 2004 and took a long, obstacle-filled road to become one of the NFL's best pass-catchers. Moss, on the other hand, was a first-round draft choice in 1998 who now has six Pro Bowls on his résumé.

"I was talking to my parents about it and I told them, 'This is crazy - Randy is asking me about soccer so he can use it to make him better. We're talking about one of the best receivers in the NFL, and he's asking me?' " recalled Welker, who will be honored in Orlando, Fla., this weekend with the 2008 Pop Warner Inspiration to Youth Award.

Indeed, the two have become close friends over the last year, not to mention one of the NFL's most lethal 1-2 tandems. Welker said they speak regularly about how they can make each other better, which is why it won't be a surprise if the two are kicking soccer balls together on the Gillette Stadium practice field.

"He called me up, told me he had the soccer ball out, and that he and his boys were doing one-on-one work," Welker said. "I'm anxious to do the same."