THIS STORY HAS BEEN FORMATTED FOR EASY PRINTING
NFC 42, AFC 30 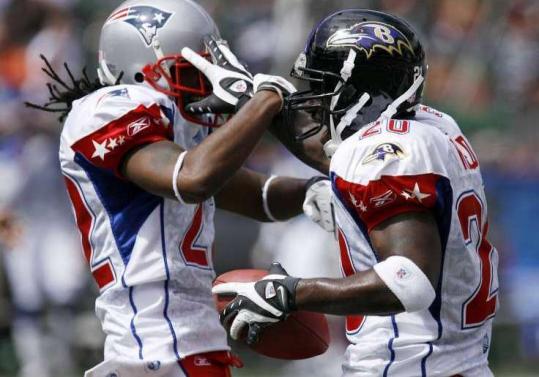 HONOLULU - Some New England Patriots played in a Pro Bowl sauna yesterday at Aloha Stadium, but their reception from the sellout crowd of 50,044 was ice cold.

The six Patriots who played in the all-star game in 80-degree temperatures and on artificial turf that was hot to the touch were greeted with a surprisingly emphatic chorus of boos during introductions yesterday.

Cornerback Asante Samuel, linebacker Mike Vrabel, nose tackle Vince Wilfork, center Dan Koppen, tackle Matt Light, and guard Logan Mankins followed a standard-bearer of the Patriots logo onto the field amid fireworks as the crowd erupted with the only negative greeting it accorded any of the game's participants.

The Patriots' favorability seems to have plunged with their 17-14 Super Bowl loss to the New York Giants Feb. 3 and persistent rumors that the team has been videotaping opponents' signals for years.

"I don't know what that [booing] was all about," said Wilfork, who assisted on one tackle in the AFC's 42-30 loss.

"Everybody hates you when you're on top. We talked about it and we thought it was kind of funny. But we have haters everywhere we go. Even in Hawaii people hate us."

Light said he was surprised. "I'm not sure this is the kind of place for boos," he said.

Vrabel, who had four tackles despite a Pro Bowl rule against blitzing, blamed the media for the reception.

"What's written about and talked about on TV, that's the only way the fans can formulate an opinion," he said.

Osi Umenyiora, the lone Pro Bowl member of the Super Bowl champions and the last player introduced, received a strong ovation when he took the field.

"Don't forget I'm from Florida and I've been playing in this all my life," said Wilfork. "But this is the hottest field we've played on this season by far." Light said the heat "had ya breathing just a bit."

A Pro Bowl record-tying 48 points were scored in the first half as Patriots offensive linemen figured in three touchdowns that gave the AFC a 27-21 lead going into the locker room.

Light and Mankins started for the AFC, but Koppen joined them late in the first quarter. It was the first time since 1966 that three Patriots offensive linemen were in the same Pro Bowl.

The trio combined to provide the protection as Pittsburgh's Ben Roethlisberger passed 1 yard to Cincinnati's T.J. Houshmandzadeh with 12:08 left in the half to give the AFC a 23-7 lead. They also helped Roethlisberger push the AFC 51 yards in eight plays to set up a 48-yard field goal by Rob Bironas of Tennessee to give the AFC its halftime margin.

Minnesota's Adrian Peterson, who rushed for 129 yards on 16 carries and was named the game's MVP, scored twice in the second half to lead the NFC to victory.

With 7:08 left in the first quarter, Fitzgerald broke a tackle by Samuel at the 2 to score on a 6-yard completion from Dallas's Tony Romo to answer the AFC's opening score.

But 3:17 into the second half, Samuel nailed Fitzgerald (6-3, 226) with a massive hit at midfield that foiled a pass from Seattle's Matt Hasselbeck and brought the crowd to its feet.

"[Hasselbeck] was trying to throw a quick pass on me, and I just put all my 185 pounds into him," said Samuel.

Fitzgerald avenged that play with a block on Samuel as Peterson ran 17 yards along the sideline to tie the game at 27.

Samuel finished with four tackles and one pass defensed.