Harrison's success story has ring to it 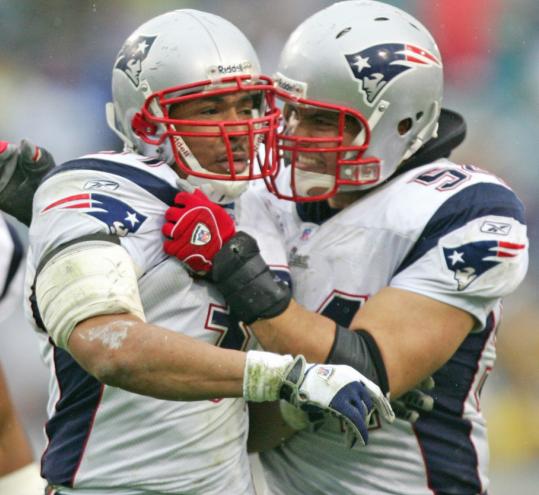 SCOTTSDALE, Ariz. - Glittering pieces of red, white, and blue confetti gently cascaded upon his head following the Patriots' 21-12 victory over the San Diego Chargers in the AFC Championship game at Gillette Stadium. As the celebration unfolded, 14-year veteran safety Rodney Harrison, headed to his third Super Bowl in his fifth season with the Patriots, couldn't help but count his many blessings.

"We've been to a few Super Bowls, but for us it never gets old," said Harrison, 35, the hard-hitting stalwart of the Patriots' secondary who is poised to take on the Giants tonight in Super Bowl XLII. "It's just so exciting to have this opportunity, especially when you're an old guy like me; you never know when your playing days are over."

During the presentation of the AFC Championship trophy, veteran linebacker Tedy Bruschi beamed with pride when he spotted Harrison, his "B-FAM," which, Bruschi said, was code for, "Brother From Another Mother."

"I told him I was proud of him, not only as a football player, but I was proud of him as a man because of the things he had gone through this year, coming back from the [knee] injury and the suspension he experienced earlier in the year," Bruschi said, referring to the four-game ban Harrison served at the beginning of the season for violating the NFL's substance-abuse policy after he admitted using banned human growth hormones to help him recover from his injuries.

"How many players do you see, [who say] it's not their fault? 'It was someone else's fault. It wasn't my fault, it was an accident,' or something like that," Bruschi said. "Rodney doesn't do that. Rodney accepted accountability. He said, 'Here I am, this is what I did, it was wrong and I'm moving on; I'm still who I am and I'm still going to continue to play, taking it one day at a time.' He did it and he was one of our most valuable players on our team.

"And that not only shows his ability, it shows his character."

How many times had it been tested before?

After the Chargers drafted him in the fifth round (145th overall) in 1994 out of Western Illinois, Harrison was released in 2002 in a salary cap move after spending nine seasons in San Diego and earning Pro Bowl honors in 1998 and 2001 and a trip to the Super Bowl in his rookie season.

Although they developed a mutual respect and admiration over time, with Bruschi this season calling Harrison an "irreplaceable part" and Harrison calling Bruschi "the heart and soul" of the Patriots' defense, it wasn't exactly the case when Harrison first joined the team as a free agent in 2003.

Bruschi admitted that Harrison's presence in the locker room created some initial awkwardness, if not outright resentment.

"When Rodney came here there were tough times here," Bruschi said. "I mean, Lawyer Milloy was still here and Lawyer Milloy got released right away, so I think I had a little animosity in my mind from Lawyer Milloy leaving, so I really couldn't develop my relationship with Rodney."

When Harrison signed a six-year contract, the Patriots had Milloy under contract and wanted him to renegotiate his deal during the offseason. When Milloy refused to budge, the Patriots released him Sept. 2, which only added to the tension between Bruschi and Harrison.

"Of course, through time, maybe it took a couple of months after that, Rodney and I became good friends," Bruschi added. "We joke around now and we call each other `B-Fam' all the time. That's how much we love each other as brothers. That's a relationship that you cherish when you play this game."

As Harrison cemented his role in the secondary, he strengthened his bond with his teammates.

In his first season in New England, Harrison returned to the Super Bowl for the first time since since 1994. However, Harrison broke his arm late in the Patriots' 32-29 victory over the Carolina Panthers in Super Bowl XXXVIII. Afterward, he was spotted on the field at Reliant Stadium, weeping tears of joy.

The following season, Harrison earned his second Super Bowl ring when he helped the Patriots clinch a 24-21 victory over the Philadelphia Eagles in Super Bowl XXXIX in Jacksonville, Fla., intercepting Donovan McNabb for the second time with nine seconds left. Another celebration ensued.

Those emotions, however, were replaced by fear and frustration when Harrison suffered a season-ending left knee injury in the third game of the 2005 season at Pittsburgh, a costly 23-20 victory.

"The injury situation was really tough for me, especially after '04 when we had just won a Super Bowl and going into Pittsburgh and having such a devastating injury like I had," Harrison said. "I tore three ligaments in my knee and being at a point and time when you never thought you get the opportunity to play again."

Harrison fought his way back in time to start 10 games in 2006, but was felled in the regular-season finale against Tennessee when his right knee was injured on a low block by receiver Bobby Wade. Harrison's return this season, though, was put on hold when he was hit with the four-game suspension.

"When you're at a point when you can't do what you're used to doing, it's very frustrating," said Harrison, who this season recorded 67 tackles (52 solo) and two sacks, bolstering his career total to 30 1/2, making him the first 30-30 man in NFL history in sacks and interceptions (33). "You go out there and lay your heart and body on the line and all of a sudden your career and future is up in the air. The good thing about me is I just totally relied on my faith and the foundation in which I live.

"If I never got a chance to play again, at least I could say I left it all out on the field."

Harrison will get one more opportunity tonight in Super Bowl XLII, which some believe could be his last hurrah.

"I'm not looking into that right now," Harrison said, when asked about retirement. "I feel great I've been playing good football . . . Right now, I can't really say that I feel like I want to move on and not play football any longer."

When the Patriots arrived in Phoenix last Sunday and awoke the next day to conduct their first Super Bowl practice in the sun-splashed splendor of Arizona State's Sun Devil Stadium, Harrison again counted his many blessings.

"Just getting off that long flight and resting and being able to get on that football field and see the sunshine and being out of that cold [New England] weather, it was just enjoyable," he said. "You never know when you'll have another opportunity like this, and I'm cherishing each moment and each day. It's truly special. This is the biggest sporting event in the world and little Rodney Harrison from Markham, Ill., has an opportunity to play in this game once again, and I'm so blessed by it."