Tied together by a knot 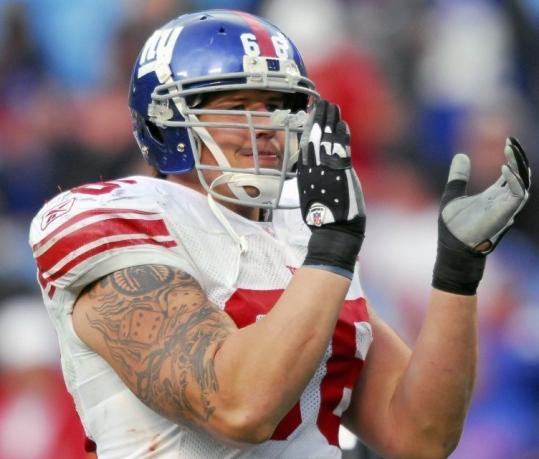 CHANDLER, Ariz. - It's not the traditional arrangement of a son working for his father-in-law. Especially not in the supercharged atmosphere of Super Bowl week.

Say hello to Chris Snee, who tomorrow night will charge onto the field at University of Phoenix Stadium as the starting right guard for the New York Giants.

Say hello to Giants coach Tom Coughlin, a.k.a. The Father-in-Law.

It's a story full of local connections. Both Snee and his wife, Katie, went to Boston College, where Coughlin was the head coach from 1991-93. Snee and Katie had their first son, Dylan, while at BC before they were married..

Snee left school early to enter the 2004 NFL draft and was taken early in the second round by the Giants - and his father-in-law, the head coach.

The selection surprised Snee. "I didn't even visit New York," he said. "During the draft, late in the first round in the time I was picked . . . I thought I was coming to Arizona. From that point on, getting the phone call, it was kind of blur. There was so much excitement and relief that draft day is over and you're in the NFL."

"It didn't even hit me until the next morning," Snee said of the family connection. "After you get picked you do a lot of interviews and enjoy the moment. I didn't really spend that much time thinking about it."

He earned a starting job in training camp and hasn't relinquished it since. He also left BC with a secure base of fundamental football. "He was a sound, solid, good football player," said his coach at BC, Tom O'Brien, earlier this week. "It was very similar to what we saw in Dan Koppen. He came in very strong and did well for us."

Koppen graduated from BC a year earlier and was a fifth-round pick of the Patriots, with whom he has become a cornerstone of an offensive line that is also looking for a Super Bowl ring tomorrow.

Snee grew up in Montrose, Pa., (population around 1,500), 47 miles south of Scranton. Going to BC was a big deal, and making it into the NFL was even bigger. Snee is the first player from Susquehanna County to make it to the NFL. He played defensive end for a high school that had only 95 students, amassing an astounding 47 sacks in three seasons.

"I liked playing defense," said Snee with a smile, "knocking people down."

"The separation is that when we're at Giants Stadium, he's the coach. Off the field, he's the father-in-law. We've been doing it for four years. It's a good relationship."

Coughlin understands the position Snee is in. "The players like to razz him," said Coughlin. "They like to give him some heat."

Two weeks ago the heat was rising when a holding call against Snee negated what could have been the winning touchdown run in the NFC title game against the Green Bay Packers. "He knows me," Snee said of Coughlin. "He wouldn't give me any grief. Anyone that's around the Giants and has been around me knows that I take the game seriously."

Winning the Super Bowl would be a dream end to a season in which the Giants rose from an 0-2 start. "It's why you work so hard in the offseason," said Snee. "That's why you go through training camp. It was awful for a month. This is what you worked so hard for."

His family and friends from Montrose will be here. Snee's father, Ed, took the first plane ride of his life yesterday. "My mother will be making her second trip,' said Snee. "They don't fly much."

Snee's journey is a story of hard work and determination. Much better than that father-in-law thing.