This is the view many fans will (hopefully) have next Sunday. And so will some city and state officials, as stricter ethics rule and a looming Super Tuesday keep plans for the Super Bowl low key. 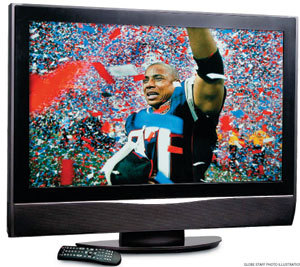 Three years ago in a Jacksonville pub, Governor Mitt Romney addressed a crowd of 800 Patriots fans, posing for photos with cheerleaders and dabbling in a bit of NFL trash talk by dissing the Philadelphia Eagles' green-and-black colors as "not really attractive."

But this Sunday, for a variety of reasons - stricter ethics rules, a looming presidential primary, or simply the fact that championships are old hat to some - politicians from Governor Deval Patrick to Menino are shunning the Super Bowl.

"It's crazy to say, but it's the same old, same old," said Joe O'Donnell, a prominent Boston businessman who gave away his four tickets. "It's almost like, who hasn't been to one or two of them already?"

House Speaker Salvatore F. DiMasi plans to watch the game on the couch in his North End home. State Treasurer Timothy P. Cahill will be in Quincy, sitting in his lucky seat. Councilor at Large Michael F. Flaherty plans to cook a turkey. Senate President Therese Murray plans to be at a friend's house, wearing a Tom Brady jersey and a Hillary Clinton pin.

"He's not going," said Dorothy Joyce, Menino's spokeswoman, who traveled to Super Bowls in New Orleans, Houston, and Jacksonville. "He'll be watching it with friends and family."

Patrick is bucking the practice of Romney, who attended both games during his tenure. (Acting Governor Jane Swift didn't go to New Orleans in 2002.) A Patrick spokesman confirmed that the governor wasn't going to attend, saying he planned to watch the game with his family, possibly cooking chili.

One reason politicians are avoiding the game is that Massachusetts has an equally competitive event two days later: the presidential primary taking place here and 21 other states. Patrick and Flaherty are supporting Senator Barack Obama, while Menino, DiMasi, and Murray are backing Senator Hillary Clinton.

Another is a State Ethics Commission ruling in 2004 that made it hard for politicians to use their connections to get tickets, ruling that even if they paid face value for the tickets they could be violating the conflict-of-interest law if an ordinary person could not easily get tickets to the event. Still, they can go to the game if they paid the same amount as everyone else.

The only instance a public official could take a free ticket is if he or she is there for a ceremonial purpose. None of our elected officials, apparently, have been asked to sing the National .

But even those who can remain within the rules and go appear to be avoiding the crush.

"If you've been to one Super Bowl, you've been to them all," said Michael McCormack, a former Boston city councilor who is well known for his ability to secure tickets but who has only had one request for Sunday's game. "There's an allure to going to hyped events, but you really have to be a fan to go to the Super Bowl. It loses its magic."

Of about a dozen politicians contacted by the Globe, the only one who said he was going was Councilor John Tobin.

"For a lot of Patriots fans, it's been blasé," he said. "We walked out of Jacksonville [after winning the 2005 championship] like it was a regular season game."

He's been to the last three Super Bowls that the Patriots played in, and several months ago he booked a plane ticket and room at the Holiday Inn in Scottsdale, Ariz. He's still looking for a ticket, putting out the word to his friends.

Tobin says he was at an event not too long ago where the World Series Trophy was on display. He saw two 9-year-olds walk past without stopping to pay their respects.