Belichick stuns us with his lighter side 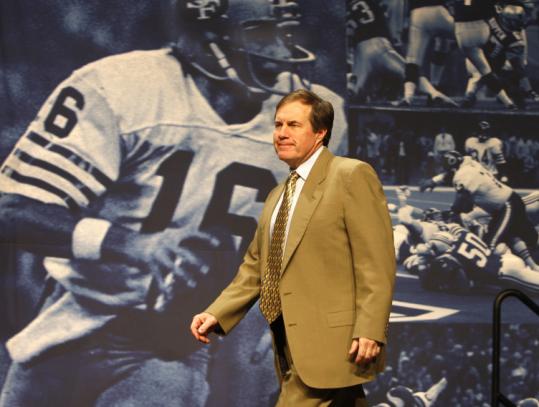 Bill Belichick, who appreciates the history of the game, strides past a huge montage of star players from Super Bowls past. (Stan Grossfeld/Globe Staff)
By Dan Shaughnessy Dan Shaughnessy / January 29, 2008

PHOENIX - Who kidnapped Bill Belichick? Who invaded his body?

Where is the ogre? Where's the terse, tense, stone-faced, photographer-shovin', handshake-dissin', humor-be-missin' coach of the undefeated New England Patriots?

A guy who looks a lot like Belichick has been more than polite at the podium in his first two days of mandated media duty. There have been none of those icy stares or awkward moments, and we're still buzzing about his downright charming performance after the Patriots landed here Sunday.

Bill made a stab a humor. He teased a couple of Boston reporters, engaged in some friendly "Marco, Polo," and quoted Tom Petty and the Heartbreakers.

I expected him to wrap things up with, "I'm here all week, try the veal."

Let's go to the transcript. When Belichick was asked about the team's send-off at Gillette, he said, "It was a great morning. That whole lower bowl halfway around the field was pretty much filled. There was a light snow, so it was a little bit of a romantic setting there."

Whoa, stop right there. Romantic? There's a word we never expected to hear at a Super Bowl press conference. And from Belichick, no less. I could practically hear Dean Martin singing, "That's Amore." It was downright unsettling. Hearing Belichick describe a football stadium moment as romantic was like hearing Mitt Romney unleash a fusillade of f-bombs. It just didn't compute.

Judy Battista, who wrote a terrific piece on Belichick in yesterday's , interviewed your coach in Foxborough last week and said, "At one point, he used the word 'poetic.' Not quite as good as 'romantic,' but pretty good."

There was more strong stuff Sunday when Belichick was asked about how much he "disdains" meeting with the media every day.

"Not at all," the coach countered. "I think you have a job to do and you are our connection between our football team, our fans, and the people who have an interest in the game. I respect the job that you do and hope that you respect the job I do. I understand that sometimes I can't give you everything that you are looking for, but I do know that this is the conduit of information from the team to the fans, and the fans are what drive the game."

Professional and polite. A perfect response.

When Channel 4's Alice Cook recited her name and station before asking a question, Belichick teased, "Nice to get that in there, Alice." Later, when Bob Lobel launched into a lengthy query, Belichick stopped him and asked, "Is this going to be a softball?"

This is not to say that Belichick offered to diagram his playbook on an overhead projector. The coach is still playing it close to the vest, particularly when anyone asks about Tom Brady's high ankle sprain. But there's humor in his obstruction.

"Coach, can you talk about Tom Brady's participation in practice today?"

"No, not really [laughter from the reporters, a small smile from Belichick]. He was out there along with everybody else."

"Did he seem to have any ill effects from the ankle injury?"

The real test comes today. Belichick has not been asked about Spygate thus far during Super Bowl week. The scandal, which was so much a part of the Patriots story in September and October, has been willfully ignored in Belichick's first two media sessions. The only question about cheating cameras came in an ESPN one-on-one with Keyshawn Johnson, a Belichick favorite. As he did when the controversy first broke, Belichick told Keyshawn he was looking forward to the next game and had no interest in talking about the past.

Today, however, is Media Day - the annual circus of microphones and notebooks. All the Patriots and Giants will be subjected to some jokers and clowns who've been sent to Glendale with orders to provoke. Someone will ask Belichick about cheating and then we'll see how he does. Doubt we'll hear the word "romantic." He'll no doubt go McGwire on us again.

Bill Belichick is a man who cares about history and legacy. He knows this is a chance for football immortality. He was wounded by the stench of Spygate and seems to be on a mission to win back those who found reason to root against his team. He'll never admit that it matters, but it does.

You could see it when he was asked about the trip to the Super Bowl perhaps getting easier after all the previous appearances.

"It's the trip you want to be on, I'll say that," Belichick acknowledged.

That's it, right there. There's a lot of noise and nonsense leading up to this game (the NFL Network offers a 213-hour pregame show), but it's the trip you want to be on.

Dan Shaughnessy is a Globe columnist; he can be reached at shaughnessy@globe.com

photo galleries
Globe Stories
Your comment is subject to the rules of our Posting Policy
This comment may appear on your public profile. Public Profile FAQ