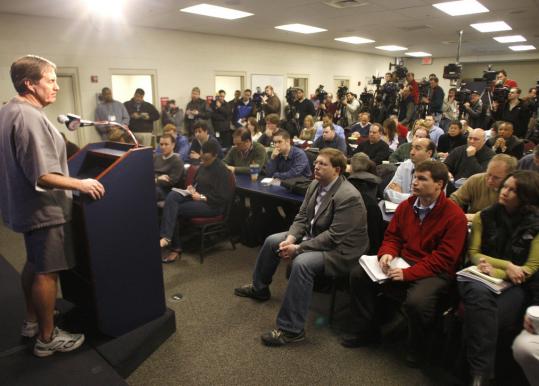 When you're the official New England Patriots playoff station, as WBZ-TV Channel 4 is, it means long hours and rolling up the sleeves to produce content no one else has access to.

"We're working pretty hard over here," said Ed Piette, president and general manager of WBZ and WSBK (Channel 38). "If you're a Patriots fan, you're going to see programming that's exclusive to this television station that you're not going to get on other stations in the marketplace. An example of that is there is a welcoming party in Arizona next Thursday at the team hotel that we'll broadcast live for at least an hour on WSBK. There will be a postgame party back at the team hotel Sunday, hopefully a victory party, that will be exclusive to WBZ-TV, and there will be certain access to certain types of player interviews that would not be afforded the other television stations."

Piette said the station's designation was the result of the special relationship it has with the team in part because CBS is the home of the AFC and that made it a natural fit.

"I know Channel 5 has a relationship with 'All-Access' and has for several years," he said. "But we've developed relationships with the [Patriots] based on broadcasting the New England Revolution soccer games on TV-38 and high school football Super Bowls and [the Patriots]. Our relationship is somewhat different than what other stations have."

How much coverage is enough? Does it ever reach a saturation point? Piette doesn't think so.

"We're immersed in it," he said, referring to those in the sports industry. "We may be overloaded with it, but the average fan, I don't think they can get enough of it. It's historic and a team of destiny. It's like the Red Sox, they can't get enough of that baseball team and they can't get enough of this football team. Everybody is hungry for the next piece of information. Look at the Tom Brady [foot injury] thing. You'd think it was Britney Spears."

Piette is a native of Detroit and has worked in other NFL cities such as Minneapolis and Kansas City.

He said what's happening here is the equivalent of career heaven.

"I've never seen anything like this," he said. "It's exciting, it's fun. You go home exhausted, but it's a good tired. It really is."

In addition to Channel 4's wall-to-wall coverage, NESN continues its "Path to Perfection" series with seven straight days of coverage from Arizona beginning Monday. Reporters Tina Cervasio and Jayme Parker will be on the scene and provide daily reports, features, and interviews. On Sunday night, after the Super Bowl, NESN will air a one-hour special, "SportsDesk Lights Out," hosted by Hazel Mae . . . CN8, the network, is putting its resources toward pregame coverage beginning Monday at 7 p.m. with "Out of Bounds." Philadelphia Eagles offensive lineman Jon Runyan will talk about the Patriots and Giants, teams he faced during the regular season. Beginning Tuesday at 11 p.m., host Gregg Murphy will be on site for "Out of Bounds" reports. The show airs nightly at 7 and 11. The coverage wraps up Feb. 4 at 7 p.m., with Murphy and his panelists reviewing the season. Channel 5 will broadcast live from Arizona beginning Sunday with reports from Mike Lynch and Mike Dowling, Ed Harding, and Bob Halloran. After the game, Channel 5 will air a Patriots special at 10:30 p.m. Comcast SportsNet is promising 16 hours of live coverage from Arizona. Michael Felger and Gary Tanguay will anchor the coverage, which features "Mohegan Sun Sports Tonight" specials at 6:30 p.m., beginning Monday, "Road to Perfection" specials, and a two-hour postgame program. Channel 7 is sending a four-person reporting team out West - Frances Rivera, Dan Hausle, Joe Amorosino, and Larry Ridley - with live reports beginning Sunday at 6 p.m. and special half-hour reports nightly at 7 (except next Saturday, when there will be a one-hour show) . . . Only two people have called the play-by-play in every Patriots' winning Super Bowl - Gil Santos and Dick Stockton. Stockton was in the booth for the NFL's World Feed during the Patriots-Rams Super Bowl as well as Patriots-Panthers and Patriots-Eagles. After a one-year hiatus, Stockton will be calling the game for the NFL Network.

For those of you looking for a hockey fix, there are a few options this weekend. Tomorrow, Versus will air the NHL SuperSkills competition at 7 p.m., in which players compete in skating, puck handling, and shooting events. The league has incorporated the YoungStars Game as part of that. The Eastern and Western conferences square off in the All-Star Game Sunday at 6 p.m. . . . For local hockey talk, tune in to ESPN 890 tomorrow from 11 a.m.-1 p.m. to hear the "New England Journal Hockey Show" with Globe scribe Kevin Paul Dupont, Mick Colageo of the New Bedford Standard-Times, and Matt Kalman, who is the editor of the New England Hockey Journal. It is also streamed on hockeyjournal.com. The show will run Saturdays through the NHL draft on June 21.