FOXBOROUGH - Tom Brady may have an actual reason to be on the injury report for Super Bowl XLII.

The quarterback, who has played in 126 straight games despite being a staple of the injury ledger because of his right shoulder, was photographed in New York City yesterday with what appeared to be a walking boot on his right foot.

The gossip website TMZ.com posted a 1-minute-18-second video clip featuring Brady and his supermodel girlfriend Gisele Bundchen in New York. On the video, a hooded Brady, who is seen carrying a duffel bag and flowers, is noticeably favoring his right foot.

Last night, Patriots spokesman Stacey James said the team had no comment on the picture of Brady. The team is off until Thursday and the next injury report isn't due until Wednesday of next week.

Brady appeared to be limping Sunday as he left his news conference following the Patriots' 21-12 victory over the San Diego Chargers in the AFC Championship game.

Yesterday, Brady did not directly answer a question about being hurt during his regular appearance on WEEI's "Dennis and Callahan" show. When he was asked about having his leg looked at on the sideline early in the fourth quarter, he replied:

"There are always kind of bumps and bruises. I'll be ready for the Super Bowl. I'm not missing this one. I'd have to be on a stretcher to miss this one. There will just be some treatment this week and, like I said, games like this you get a little nicked up, but it's nothing serious."

Brady was sacked twice Sunday and appeared to be slightly hobbled after Igor Olshansky and Stephen Cooper tackled him for an 8-yard loss on the final drive of the game.

An injury might explain Brady's subpar - by his MVP standards - performance against the Chargers. He was 22 of 32 for 209 yards and two touchdowns, but was intercepted three times, including once in the end zone by Antonio Cromartie late in the third quarter, Brady's first red zone pick in two seasons.

However, it should be noted that a presumably healthy Brady threw three interceptions against the Chargers in the postseason last year as well.

Just the week before, in a 31-20 playoff victory over the Jacksonville Jaguars at Gillette Stadium, Brady had been pinpoint accurate, completing his first 16 passes and setting an NFL record for highest completion percentage in a game by going 26 of 28 (92.9 percent) for 262 yards and three touchdowns with zero interceptions.

During the regular season, Brady threw an NFL-record 50 touchdown passes and just eight interceptions, authoring another mark with a plus-42 TD/interception differential.

The 18-0 Patriots will try to complete a perfect 19-0 season by defeating the New York Giants in Super Bowl XLII Feb. 3. If Brady were unable to play, the Patriots backups are third-year player Matt Cassel, who in six games this season has completed 4 of 7 passes for 38 yards and an interception that was returned for a touchdown, and undrafted rookie Matt Gutierrez. 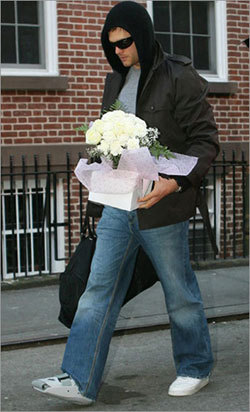 Tom Brady's right foot was under wraps yesterday in New York, but he promises he'll be in full uniform for the Super Bowl. (Insight News and Features)