Providing a rush of energy 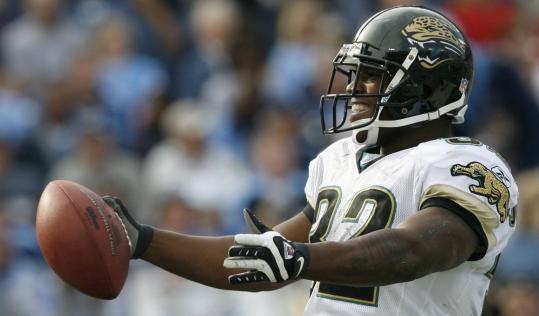 JACKSONVILLE, Fla. - Game time against the undefeated Patriots is just days away and the pressure must be unbearable, because Maurice Jones-Drew, Jacksonville's all-purpose wonder, is sitting quietly, just gazing to and fro. In front of his locker during a break in his practice day, he glances down at his BlackBerry, then up at a reporter.

"I have a brother on the other team, his name is Matt Gutierrez. He's my brother, like [Derek] Landri's my brother," said Jones-Drew, slowly, carefully. He nods toward the other corner of the Jaguars' locker room, where Landri, a rookie defensive tackle, is getting dressed. They played together at famed De La Salle High School in Concord, Calif., and were part of an incredible streak of 151 consecutive victories that covered 1992-2004.

Gutierrez, New England's third-string quarterback, was a star on some of those undefeated clubs, but this week, because he's wearing the opposing uniform, he isn't returning calls. Or so Jones-Drew surmises.

"I tried to call him, man, and he didn't even answer his phone. I'm hurt. He didn't answer. So, if you reach him, tell him I'm trying to rekindle something. I don't know what I did wrong. I thought we were better than that."

Silence, and Jones-Drew watches the reporter scribble notes. Then he smiles and can't hold in the laughter. He was making it up, but he pleaded with the reporter to put it in the story.

"Hopefully [Gutierrez] will see it, it will tick him off and he'll try to call me. I'm not going to answer."

Jones-Drew's smile radiates and it is suggested he seems to be enjoying himself, no matter that the NFL season has entered that time of year when games are treated as life and death.

"You know, if your job's not fun, why do it? You can't be serious all the time."

With that, laughter erupts from the confines of his locker space and Jones-Drew is asked to speak about another New England quarterback, the one who does play - Tom Brady.

"Tom Brady is like my idol. He really is," said Jones-Drew.

Asked why, he put a geographical spin on it. Brady grew up in San Mateo, not far from the Oakland area, where Jones-Drew is from. A couple of Bay Area kids, that means a lot to Jones-Drew. But more than that, Brady "is that guy, man. He dates supermodels, gets his cologne. He's everything you could ever want to be, man. If I was tall, I'd love to be a quarterback, but I'm playing with the cards I was dealt . . ."

Which is a body frame of 5 feet 7 inches, 208 pounds, appreciably small by NFL standards and even major college parameters, yet Jones-Drew has defied the naysayers everywhere he's gone. But if you suspect he might be bitter, or you should feel badly for him, he stops you cold, first with a hard stare, then a warm smile.

Making a name for himself

He was Maurice Drew back in his De La Salle days, a dynamic running back who couldn't be stopped on a team that couldn't lose. He was so good, so fast, so agile that the Pac-10 teams couldn't ignore him, even if deep down they wondered about his size.

"Cal wanted him. Pete Carroll at 'SC wanted him, too," said Bob Ladouceur, the head coach and architect of the famed De La Salle program.

Of course, Carroll and Southern Cal would need a dozen footballs for all the blue-chip running backs they romance, and that recruiting year was no different. In Northern California they set their sights on Drew, but at the same time they were signing a Southern California kid named Reggie Bush. No worries, Drew opted for cross-town rival UCLA.

For three falls they were stars of their respective programs, though Bush attracted the bulk of the attention. At Southern Cal, he got the Heisman, the national title, the marquee network games, and was the second pick in the 2006 draft. Drew may have been grossly overshadowed, but he wasn't greatly outplayed. His three years with the Bruins were productive ones - 2,503 yards rushing, 26 touchdowns in 36 games, 64 catches, consensus All-America, and All-Pac-10 punt returner. As a senior, he became the first Bruin to lead the nation in punt-return average since a gentleman named Jackie Robinson.

Not a bad name to be associated with, but it was another name that tugged at Drew; that of his grandfather, Maurice Jones, who died during Maurice Drew's junior year at UCLA. Maurice Jones had raised his grandson back in Pinole, Calif., and had been there every step of the way, so as a tribute, Maurice Drew chose to add his grandfather's name. So passionate was he about this that Maurice Drew actually went through the courts to add the hyphen and the Jones and it's every bit a part of his identity as is the Superman T-shirt he likes to wear beneath his uniform.

It's a reminder of the extra hurdles he must overcome because of his size.

"It's always been the same thing . . . you know, he was too small," said Gutierrez, who was a year ahead of Jones-Drew at De La Salle. "I think he's used to overcoming that stigma of being too small since he was a kid playing Pop Warner and high school, too."

Ladouceur laughs. "And guess what, if he plays 10 years in the NFL, he'll still be using that as motivation."

Jones-Drew merely shrugs. "There was nothing I could do about that. It's like they were knocking me on something I have no control over. So, going out there, whoever gave me a chance, I was going to give my best. More than anything, man, I just loved to play the game."

While Bush (second overall) and even USC's LenDale White (45th) were drafted ahead of Jones-Drew (60th) in 2006, it is the man with a laundry list of nicknames who has opened more eyes and earned more superlatives. Jones-Drew has been called "MoJo," "Mighty Mouse," "The Pinball," and other assorted names, "but the one I like is 'Pocket ,' " said Ladouceur. Reportedly assigned to him by former All-Pro and current TV analyst Shannon Sharpe, "Pocket Hercules" pays tribute to Jones-Drew's relentless, unyielding power and speed.

"He's so compact and usually with players like that, they're stiff and slow," said Ladouceur, whose De La Salle teams have produced such NFL names as Amani Toomer and Aaron Taylor. "But Maurice is not. He's got speed, he's got great agility."

Ladouceur never had a doubt that Jones-Drew would make it. The size issue, he insists, is for public consumption and media fodder. "Anyone who is around the game can see he can play," he said. What helped Jones-Drew, however, was that he was drafted by Jacksonville, which already had a superb, though painfully unheralded, running back named Fred Taylor.

'The heart of a champion'

Over the course of his first eight seasons, Taylor had run for 1,000 yards five times. With Jones-Drew providing dependable backup each of the last two campaigns, Taylor has cracked the magic number twice more, his 1,202 total was fifth in the league this season. The emergence of Jones-Drew has seemingly pumped more life into Taylor, who ranks 17th on the career rushing list with 10,715 yards, and the Patriots know they'll be facing the most formidable 1-2 running punch they've seen this year.

"They're both real good," said New England linebacker Mike Vrabel. "[Taylor] is certainly running as well as he's ever run - a lot of explosion, a lot of speed. They both block; it's not like neither of them are incapable of picking up linebackers."

As Exhibit A, ask San Diego All-Pro Shawne Merriman, who lined up on the goal line in a game against Jacksonville earlier this season. When Jaguars quarterback David Garrard dropped back, Merriman rushed, but if he had visions of doing his insufferable "Lights Out" dance, instead, he saw stars. Jones-Drew got low and absolutely leveled Merriman, the film clip of which has made the rounds on YouTube.

It's the sort of contribution that has endeared Jones-Drew to his teammates.

"He speaks volumes for the little guys," said Taylor. "So many people look at this game as size counts, which it does, don't get me wrong. But guys like [Jones-Drew], where I'm pretty sure he was told one thing and he just refused to listen to it, [it's] kind of like I tell you guys all the time, [he] uses it as a fire and just continues to play."

And, oh, how Jones-Drew has played and piled up the numbers. He ran for 941 yards on 166 carries as a rookie, 768 on 167 in 2007. He had 46 catches a year ago, 40 more this past campaign, and of the 62 kicks he has returned in two seasons for an average of 27.0 per, two have gone for touchdowns. However, it's one he didn't take back all the way that points to his definitive value to Jacksonville.

It came Saturday night, just minutes into the wild-card game in Pittsburgh. The Steelers had scored a touchdown with relative ease on the opening drive and if Jacksonville fans felt queasy, they can take comfort knowing Jones-Drew did not. He felt it was his duty to return the momentum to his side, so he took the kickoff and barreled and darted and charged his way downfield for 96 yards. He fell 1 yard shy of a touchdown, but Taylor did the rest on the first play from scrimmage, a game-tying touchdown that spoke volumes about "Pocket Hercules."

Oh, and for good measure, Jones-Drew scored twice later in that game, taking a pass-and-run 43 yards and scampering 10 yards with a handoff from Garrard.

"He's a special young man. I've said it before, he's really a champion. He's got the heart of a champion," said Jacksonville coach Jack Del Rio, who grew up in Northern California and did not require an introduction to the legend of De La Salle. Jones-Drew's connection to that program was enough to convince the onetime NFL linebacker-turned-coach that he was a worthy second-round draft pick.

"He's not just a guy that finds a way to nimble and get the guy down. He really goes to take a chunk out of a guy [when he blocks]. He's explosive with the ball in his hands. He's a threat without it. He's a super football player and he's been unselfish. I can't say enough about him."

Patriots got a glimpse

The Patriots would believe every word of it, too, and they need only rewind the game film from Christmas Eve 2006. New England won the game at Jacksonville, 24-21, but in his first career start (Taylor was out with a hamstring injury), Jones-Drew ran 19 times for 131 yards, had six receptions for 41 yards, and scored one of his two touchdowns on a 74-yard run that left several Patriots diving at thin air and grasping frustration.

All the while, one can be assured, there was a smile on Jones-Drew's face, for that is at the heart of a young man Ladouceur praises as "the real deal," for his off-field character and football presence.

"I enjoy being on the field. Period, man," said Jones-Drew. "[How many] can say they've ever been on an NFL field? It's fun being out there. You have a chance to be out there with a group of men who love the game, that play great, who love being out there together."

Like his fellow Jaguars and the Brady-led Patriots with their undefeated record?

Jones-Drew nods his head slowly, purses his lips, and offers a profound show of respect.

"There's not one player on their team who is not good. They're great. They have a lot of guys who know how to play, where to be at. We're just blessed to have an opportunity to be on the same field as the New England Patriots."

A pause, another deep breath, and yet another smile.