Three coaches offer their informed opinions on the Jaguars 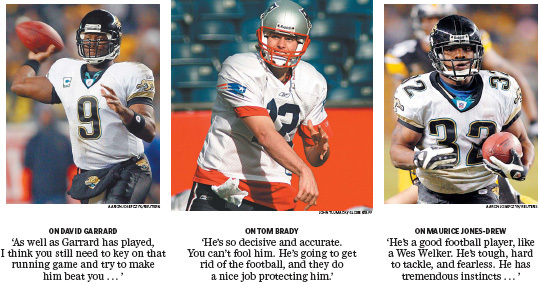 Titans coach Jeff Fisher and his staff prepared two game plans against the Jaguars this season, so he has an insider's knowledge of Jacksonville's personnel and tactical approach.

Raiders coach Lane Kiffin got an up-close look at the Jaguars in Week 16, and he was impressed.

Texans special teams coach Joe Marciano is familiar with Jacksonville, as both clubs play in the AFC South, so he has a good feel for their coverage units and specialists.

So what do Fisher, Kiffin, and Marciano see unfolding Saturday night when the Jaguars visit the Patriots in an AFC playoff matchup?

"Obviously, the success the Patriots had this year speaks for itself," said Fisher, whose club split with the Jaguars. "They're certainly the favorite, not only the way they play offensively, but the way they play defense, the way their defense really rises in the postseason. They're also very talented on special teams, so overall, there are very few weaknesses.

"Jacksonville, on the other hand, has a very talented special teams group, dynamic. They run and they're physical and well-coached. The defense is very, very solid. They put some pressure on the passer and they're very good against the run.

"When they put themselves in a situation where they need to defend a one-dimensional game, they do so. They're very well-disciplined in their pass-coverage technique, and you know they'll be very well-prepared for this game.

"Like most games, this will likely be determined by turnovers, big plays, and missed opportunities. The Jaguars have been fairly effective and successful on the road [6-3], and one thing you notice is that they are not going to change their style. They will run first, make good decisions, convert third downs, and take some opportunities downfield. They're going to do whatever it takes to keep the football."

Fisher's point is well taken, as the Jaguars' time of possession (32:08) was third best in the NFL. The Patriots (32:33) ranked second, so that figures to be a subplot: Who can control the clock?

Kiffin pointed out that the Jaguars' ability to dictate the tempo of games starts with their running attack. Their 522 rushing attempts were second most in the NFL, behind only Fisher's Tennessee squad.

When the Raiders visited Jacksonville in a Week 16 matchup, the Jaguars totaled 201 rushing yards in a 49-11 win. Oakland was knocked out by the 1-2 punch of Fred Taylor (61-yard touchdown) and Maurice Jones-Drew (14-yard TD).

"As well as [quarterback David] Garrard has played, I think you still need to key on that running game and try to make him beat you, because if they get that running game going, it's going to be a long day," Kiffin said

"The tailback situation is tough because even though they're different in style, they're both home run hitters. When you think of a 1-2 combination, usually it's one or the other, maybe one bigger, physical guy and a smaller, quicker guy. But Fred is so fast and has so much shake to him, and Maurice is so hard to tackle, you think you have him for 2 yards and it can quickly turn to 12."

As evidenced by their wild-card win at Pittsburgh, the Jaguars use Taylor and Jones-Drew as co-lead backs. While some might consider Jones-Drew more of a third-down threat, he was actually in for more plays (29) than Taylor (24) against the Steelers.

On 15 of their 54 offensive snaps last weekend, the Jaguars lined up in a power formation with two tight ends and one fullback. On 14 others, the team paired two receivers with mammoth tight end Marcedes Lewis (6 feet 6 inches, 270 pounds) and hard-charging fullback Greg Jones (6-1, 254). And on seven plays, the Jaguars went with a double-tight end formation, bolstering an already sturdy line with Lewis and Richard Angulo (6-8, 266).

Kiffin believes that is reflective of the style the Jaguars like to play, essentially challenging foes at the line of scrimmage.

"I'd have to say they're probably the most physical team we faced all year," he said. "They're a team that has dominated both sides of the ball at times. I love that style of play. They're not trying to trick you. They want to hit you in the mouth. They're extremely physical and I think they take their cue from Jack [Del Rio], because that's the way he played."

While Kiffin focused on physicality, Fisher pointed out another key to the Jaguars' offense - limiting mistakes (21 giveaways). Only three teams had fewer in the regular season, with the Patriots totaling a league-low 15.

"David has been making good decisions and they keep things clear for him," Fisher said. "He's a very strong runner, as we saw in last week's game on that big fourth-down play [a 32-yard scramble]. You can see he has his legs back underneath him now. The ankle injury is behind him."

As for the Patriots' offense, Fisher focused on the NFL's Most Valuable Player, quarterback Tom Brady.

"They deploy their receivers and backs as such that he will always have a place to go with the football, and any one of those receivers is capable of making big plays. You have to deal with [Wes] Welker, but then there's [Randy] Moss running deep. Or someone else. And then you still can't disregard the run, even though they often elect not to feature the run game."

Defensively, foes must be prepared for a little bit of everything against the Patriots.

"What's unique about them is that they'll always have a different plan, something a little unusual, and it's often hard to recognize," Fisher said. "And you can be sure they're going to take things away and make you do different things."

On the flip side, Kiffin sees a Jaguars defense that "schematically doesn't do a lot, but they're physical and they execute well."

"What stood out to me was that they are a great tackling unit," he said. "That front seven wraps up well and the safeties come up and hit. They're going to make it hard on you to hit big plays."

One of the biggest plays in the Jaguars' win over the Steelers was Jones-Drew's 96-yard kickoff return in the first quarter. At 5-7, Jones-Drew can be challenging for coverage units to locate.

"He's a good football player, like a Wes Welker," said Marciano. "He's tough, hard to tackle, and fearless. He has tremendous instincts running with the football. He'll make you miss, but at the same time, he can break through arm tackles. He's a running back who really knows how to return it."

Since the Texans have not faced the Patriots this season, Marciano isn't as familiar with their special teams personnel, although he commended Brad Seely for always having well-coached units.

Marciano said the Jaguars like to come after punts, and that two players stand out on their coverage units.

"Montell Owens, the running back from the University of Maine, he's a great punt cover guy with speed and real good instincts," said Marciano. "He's a heck of a tackler and he runs through people. I voted for him to go to the Pro Bowl as a special teamer.

"And [running back] Chad Nkang had 30 tackles. That's a lot of tackles on special teams. You keep those two guys off the stat sheet and you have a much better chance for a return."

All three coaches will be tuned in Saturday night.

One thing Fisher will watch with curiosity is how New England's offense decides to attack the Jaguars' defense.

"They're difficult to run the football against," Fisher said. "So do they spread them around and try to put pressure on the linebackers with underneath routes with receivers? Or do they try to put pressure deep down the field? That's what coaches usually look at, how you game-plan."