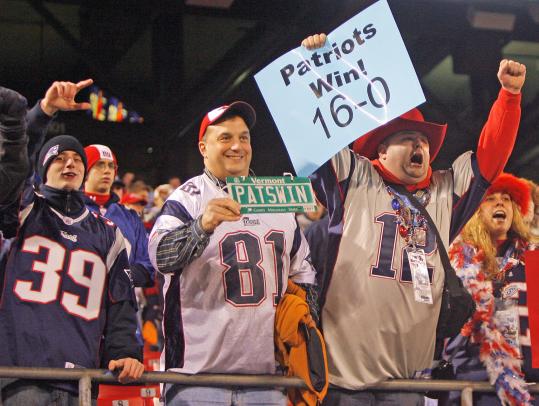 Patriots fans came out to the Meadowlands in force to watch their team cap a perfect regular season with a win over the Giants. (Jim Davis/Globe Staff)
Email|Print| Text size – + By Christopher L. Gasper Globe Staff / December 31, 2007

The Patriots' pursuit of a perfect regular season was must-see TV across the country.

An average of 34.5 million viewers tuned in Saturday night to see New England pull off the first 16-0 regular season in NFL history with a 38-35 victory over the Giants, making it the most watched non-playoff game in more than 12 years and the most-viewed show of the television season.

The previous most-watched show of the television season was the Patriots' 24-20 victory over the Colts Nov. 4, which was broadcast by CBS and drew 33.8 million viewers. Based on total viewers, the Patriots have the top four shows this season.

The Patriots-Giants game, the most-watched NFL contest since a Thanksgiving Day tilt between the Cowboys and Chiefs in 1995 drew 35.7 million viewers, was broadcast on the NFL Network and simulcast on NBC and CBS after the league bowed to political pressure to make it available to fans who don't have the NFL Network, which is available in less than 40 percent of the nation's homes with TV sets.

The game did a whopping 50.1 rating and 75 share in the Boston market, where it was broadcast on WCVB-TV (Channel 5), WHDH-TV (Ch. 7) and WBZ-TV (Ch. 4), and on WMUR (Ch. 9) in New Hampshire. It did a 24/40 in New York. The rating is the percentage of all homes with televisions watching the game. The share represents the percentage of television sets in use at the time that were tuned in.

Originally, Channel 5 had the exclusive local rights to broadcast the game before the NFL agreed last Wednesday to let NBC and CBS local affiliates carry it as well. WCVB had the highest rating among Boston market stations with an 18.0/27.

"Given the extraordinary publicity surrounding this game, which everyone in America seemed aware of and many tuned into, I really appreciate the viewers sticking with WCVB," said WCVB president and general manager Bill Fine. "Many viewers recognized we bid on this game, won the rights vs. every other station in Boston, and stuck with us when the game was opened up to CBS and NBC. We may have lost out on the 50 rating, but in the end we won in my mind."

It was business as usual for coach Bill Belichick one day after his team made history with its perfect regular season. With a first-round bye, Belichick has given the team off until Thursday, but that doesn't mean the coaches won't be gearing up for the playoffs, even though they won't know what team to gear up for until this weekend.

The NFL released the playoff schedule yesterday and the Patriots will play their divisional-round game Jan. 12 at 8 p.m. at Gillette Stadium against the lowest remaining seed.

"After we see how things come out, then we'll make our priorities and set our goals for what we want to try to get done this week with the potential opponents that we could have in the [divisional] round," said Belichick.

"There are things that we can work on that we're doing that could stand for some improvement, and then we'll also turn our attention to some of those potential opponents."

The Giants' 35 points were the most the Patriots had allowed this season. New York quarterback Eli Manning tied his career high with four touchdown passes (against one costly fourth-quarter interception) and New York also scored on a 74-yard kickoff return by Domenik Hixon.

"As I said, there are plenty of things in the game that we can improve on and we can do better," said Belichick. "That's in all three phases of the game, but certainly defensively. When you give up 35 points on defense and special teams, that's not where you want to be. That's not going to win every game for you in this league, that's for sure."

So, how much did Randy Moss, who set an NFL record for touchdown catches in a season (23) with his two TD grabs against the Giants, care about breaking Jerry Rice's record of 22, set in 12 games in 1987? Not as much as you may think.

"I don't really think that me breaking Jerry Rice's record was special," said Moss. "I think shutting you guys up was what made it special, all the negativity and all my critics.

"I think this really is a good feeling to be able to come in and have a good season like this, to have confidence in myself that I can still get it done. I wasn't really coming into the season not thinking that I was going to have a good season. Now, what the numbers were, I really didn't know."

Nose tackle Vince Wilfork could be getting another dreaded package from the league. Wilfork, who already has been fined twice this season, $12,500 for a hit on the left knee of Bills quarterback J.P. Losman and $5,000 for a late hit on Cowboys tight end Jason Witten, could be fined for sticking his right index finger inside the facemask of Giants running back Brandon Jacobs, during the second quarter. Wilfork appeared to poke Jacobs in the face following the breakup of a scrum that started when linebacker Junior Seau drew a flag for holding down Jacobs after a completion to New York tight end Kevin Boss . . . Safety Rodney Harrison sat out six plays after he drew a 15-yard personal foul for grabbing the facemask of offensive lineman Chris Snee with New England leading, 38-28, with 4:30 to go . . . Cornerback Asante Samuel on the Patriots' 16-0 celebration: "You know how the Boston Red Sox be popping their bottles and their champagne after they won? It was kind of like that without the bottles."