Brady, Moss head a contingent tied for most in team history 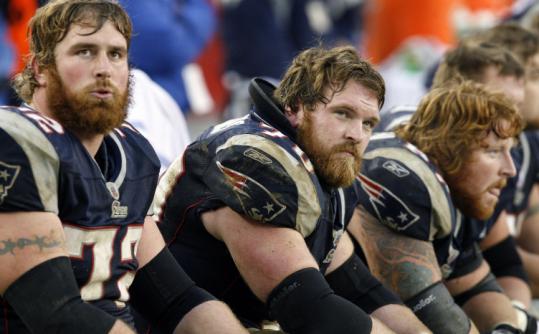 FOXBOROUGH - Rodney Harrison, take it away.

Eight of your teammates were named to the Pro Bowl yesterday, a group comprised of quarterback Tom Brady; receiver Randy Moss; offensive linemen Matt Light, Logan Mankins, and Dan Koppen; outside linebacker Mike Vrabel; nose tackle Vince Wilfork; and cornerback Asante Samuel. Since the 1970 AFL-NFL merger, it ties a team record for most Pro Bowlers, with the powerful 1985 squad.

As one of the leaders of the locker room, care to share your thoughts on this news?

Let's start on defense with Vrabel, the 11-year veteran who makes his first Pro Bowl appearance. He leads the team with 9 1/2 sacks, the second-highest total among AFC linebackers.

"I'm so excited for a guy like Vrabel, for the simple fact that I feel like he's a guy who has been overlooked in this league for so many years," Harrison said. "He's a guy that prepares, a consummate pro. He's a smart, intelligent guy who has underrated ability and is constantly making plays all over the field. He's the type of guy you are truly, truly happy for because he doesn't seek the individual accolades."

Then there is Samuel, whose six interceptions lead the Patriots and are tied for fourth in the NFL. He has been credited with 16 passes defensed, the top total on the team and fifth in the league. A four-year veteran, he made his first Pro Bowl.

"Best corner in the league in my opinion," Harrison said. "I think week in and week out, people are starting to understand this guy is something special. He's a guy I've seen come from the bottom, who has worked his tail off in the offseason to get to where he's at. He's a guy with tremendous instincts who makes plays everywhere."

While Samuel's playmaking skills are easy to spot, Wilfork's work is a bit tougher to detect because he usually is lined up directly over the center. Now in his fourth season, the 6-foot-2-inch, 325-pound Wilfork has helped control the line of scrimmage as the Patriots rank fourth in the NFL in yards (289.9) and points allowed (16.6). This is his first Pro Bowl selection, and his contract calls for a $400,000 bonus for the honor.

"He just goes out there and does his job," Harrison said. "He's not out there parading for anything. He has so much ability and is a team-first guy, just a great guy."

Perhaps no one personifies that team-first approach more than Brady, who set a franchise record for quarterbacks with his fourth selection.

Brady is at the tail end of the best statistical season of his career, his 45 touchdown passes the third-highest total for a season in NFL history. He also leads the NFL in passing yards (a career-high 4,235) and completion percentage (69.2).

One of Brady's favorite targets has been Moss, who earned his sixth Pro Bowl berth. He leads NFL receivers with 19 touchdowns, second in league history to Jerry Rice's 22 in 1987. As part of the one-year contract he signed with the Patriots, Moss earned an additional $250,000 for the Pro Bowl selection.

"Like Brady, the best in the game," Harrison said. "No surprise there."

And then there are the three offensive linemen - Light (left tackle), Mankins (left guard), and Koppen (center). They are the first trio of Patriots linemen to earn Pro Bowl recognition in the same season since the merger. In 1966, the Patriots had three linemen - center Jon Morris, tackle Tom Neville, and guard Len St. Jean - in the AFL All-Star Game.

The Patriots have allowed just 17 sacks this season, a number that is more impressive considering the team runs many spread packages in which the linemen are left with little help.

"The three amigos," Harrison cracked of Light, Mankins, and Koppen. "I'm so happy for those guys. Once again, they're our offensive version of the defensive guys. They are guys that don't seek the individual spotlight, and don't care about anything other than getting the job done. They deserve it."

Of the eight Pro Bowlers, all but Koppen were selected as starters. Tough omissions were receiver Wes Welker and defensive lineman Ty Warren.

Overall, the only times the franchise sent more players to an all-star game were in 1963 and 1966, when the Boston Patriots had 11 at the AFL All-Star Game. Last year, only defensive lineman Richard Seymour and Light (injury replacement) made the Pro Bowl.

And now for the wrapup, Rodney Harrison.

"The thing that I'm so proud about the guys that made it is that they are all guys that are No. 1 about the team," he said. "They focus on the team, and what the team accomplishes, without worrying about individual accomplishments. You can have a bunch of Pro Bowlers, but if you don't do anything with it, it's all for naught."