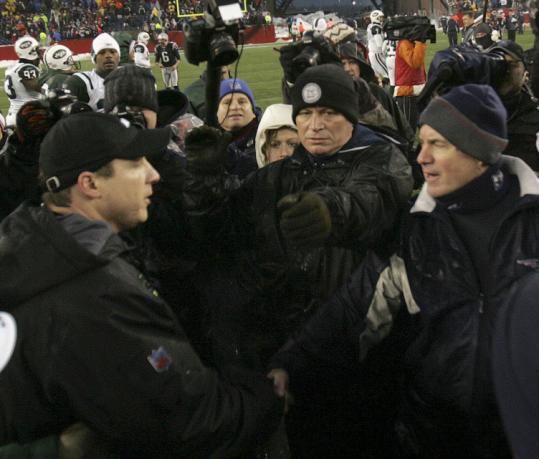 FOXBOROUGH - The much-anticipated postgame handshake was - like the game - cold and uneventful.

There was no midfield snowball fight featuring the head coaches. No Greco-Roman wrestling match between Bill Belichick and Eric Mangini. There was just a short, civilized grasp of frozen fingers. End of game. End of story. For now. You never know, of course. Maybe we'll learn later that Matt Estrella was playing Radio Nowhere into the headset of Chad Pennington. Maybe we'll find out Brad Smith was listening to Larry Johnson and Fred Smerlas argue on WEEI when he was supposed to be hearing words from his coach. There was, in fact, a little static for the Jets yesterday, but most of it transpired on the Gillette FieldTurf.

Falling far short of Wilt Chamberlain's century mark, the Patriots settled for a methodical, 20-10 victory over the hated Jets in snowy, rainy, windswept (read: miserable) Gillette Stadium yesterday. It was a day to celebrate red zone defense, the return of the Patriots' running game, and assurance of home field throughout the playoffs.

That's right, boys and girls. Between now and Super Bowl XLII in Glendale, Ariz., the Patriots will travel no further than Exit 16W (Dec. 29 regular-season finale at the Meadowlands against the Giants).

The Patriots are 14-0, matching the 1972 Dolphins as the only NFL teams to start a season with 14 consecutive victories. New England has a chance to become the first team to finish 16-0 in a regular season (the fabled Fish played in the era of the 14-game regular season), but Belichick still won't bite.

Coach Bill acknowledged, "We're happy with our record," but would not speak of the history his team is writing. He instead grunted about "the next game,' which is Sunday at home against the 1-13 Dolphins.

Gotta love that one. Only Belichick could take something as significant and sacred as 16-0 and reduce it to "a chance to go 6-0 in the division." It's like a man awaiting a Nobel Prize saying, "I think I've got a shot to win the parking space as Brookline High School Teacher of the Month."

We know that 16-0 (and more important, 19-0) is precious to New England's grid god, but Belichick is never going to give that up and we'd be disappointed if he did. Evasion of the obvious fits him like a gray hoodie with cutoff sleeves.

Greater Boston woke up to its second big storm in four days, testing the loyalty and snow-driving skills of most Gillette ticket-holders. Some of them were challenged again when they got to seats buried in crusty snow. Late in the morning stadium crews vigorously cleaned the snow off the club seats, dumping several piles onto the blue sideline seats below. Some off the piles were still there at kickoff, but there were enough no-shows to make room for fans unseated by the mini-Kilimanjaros (perhaps December tickets should include a "bring your own shovel" clause).

No true Patriot fan wanted to miss this game. The Patriots were out for payback after the September Spygate episode that saddled the Belichickmen with loss of honor and the harshest penalties in league history. One New England loyalist came dressed as a rat in Jets clothing. All patrons knew cameras would be confiscated at the door.

Fans seeking revenge were largely unsatisfied as the Jets managed to stay in the game for almost the entire 60 minutes. Tom Brady, the QB with ice water in his veins, was limited by the brutal conditions and wisely reverted to game-management style, letting his defense and kicker win the game. Blocked punts, one by each team, and an interception returned for a touchdown represented the most exciting plays of an otherwise slow, almost friendly contest.

"I think we realized today, no matter what it was out there, it was gonna be ugly," said veteran Tedy Bruschi.

It was the Jets who were caught cheating (12 men on the field) on their first series and the Patriots KO'd starting quarterback Kellen Clemens (he'd fit right in with Koby, Kory, Kacy, and Kody) on the first series.

Eugene Wilson's 5-yard interception return of Clemens's one and only pass (Clemens's QB rating of 0.0 was the same as Bluto's GPA) gave the Patriots a 7-0 lead in the sixth minute of play and New England never trailed. Even though on paper it was a close game, it never felt like the Patriots were in trouble.

Wilson's TD ignited the best crowd moment of the day - spontaneous snow-tossing throughout the ice water mansion. But it got ugly in the second half and at one juncture the game was halted while officials waited for fans to stop throwing snowballs at Mangini and the Jets.

When it was over, Belichick and his frat brother flashed forced smiles at one another as they neared midfield for the awkward postgame exchange. Neither wanted to talk about the bad old days of 2007.

"I think we've covered all that," said Belichick.

While the Patriots and Jets were uttering postgame analysis it was learned that the hapless Dolphins defeated the Ravens in Miami in overtime. A shame. There was some nifty symmetry in the prospect of the 14-0 Patriots going against the 0-14 Dolphins in an effort to overtake the 1972 Dolphins en route to the playoffs. It could have been a collision of the zeroes, a bookend beat-down on the road to perfection.

Now it's just another game against another bad team. And a chance to go 6-0 in the division.

Dan Shaughnessy is a Globe columnist. His e-mail address is dshaughnessy@globe.com.