Feeling is, Belichick really wants this one 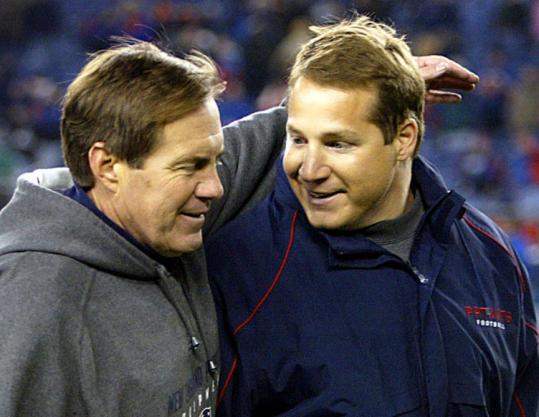 FOXBOROUGH - When Bill Belichick took over as Patriots coach in 2000, there was no team he wanted to beat more than the New York Jets.

A former Patriots player who was a member of two Super Bowl teams in New England said the only rivalry coaches and players put a big emphasis on was the Jets.

"When I first got there, the Jets was their main rivalry," said the player. "I don't even like that term because it's got such a college connotation. That was an important game. Nobody liked the Jets. But as my time there went on, there wasn't a team [that] we said, 'We have to beat them.' We thought, 'We have to beat everybody.' "

It could be that Belichick is going back to the future, because games against the Jets have become must wins again.

The latest chapter of the rancorous rivalry will be written today at Gillette Stadium. Jets-Patriots is beyond a rivalry. It's a full-fledged feud, with the strained relationship between Belichick and Jets coach Eric Mangini at the forefront.

Belichick, who is 11-5 against the Jets as Patriots coach, would rather conduct an hourlong news conference than see his team's perfect season fall at the hands of his former protégé, who was tabbed "Mangenius" after he beat his ex-boss, 17-14, last year at Gillette Stadium.

The Spygate episode in the season opener between the teams Sept. 9, in which the Patriots were docked a first-round pick and fined $250,000 and Belichick was fined $500,000 by the NFL for illegally taping the Jets' defensive signals from the sideline, ratcheted up the rivalry another notch in New England.

The feeling is mutual. The Jets see the Patriots as their biggest rivals.

"Yeah, it's New England," New York safety Kerry Rhodes told Jets media members. "I just think all the ties that the teams have between each other, even back when Belichick was supposed to be here and left - whatever, just the history between the two teams."

Nothing ramps up a rivalry like genuine animus, and there was enough of that to go around before Mangini defected to New York, and before the teams started fighting over who films what from where and who did or didn't have permission. In the latest chapter, Belichick, in an interview with NBCSports.com Friday, contradicted Mangini's claim that the Patriots had given the Jets permission to use a second end zone camera for videotaping purposes at Gillette Stadium during the Patriots' 37-16 playoff victory in January.

The Jets defamed Belichick in 2000, when he hastily resigned as the successor to head coach Bill Parcells after a day, famously scrawling on a piece of the paper that he didn't want to be HC of the NYJ. Then-Jets president Steve Gutman questioned Belichick's mental health, saying Belichick was "obviously in some turmoil," in a petty display the coach never forgot.

Caught in the feud between Parcells, who left the Patriots for the Jets following the 1996 season, after leading New England to the Super Bowl, and Patriots owner Robert Kraft, Belichick was in limbo until a deal was brokered in which the Patriots surrendered their first-round pick in 2000 to hire him. He took a Jets defensive assistant named Eric Mangini with him.

The 3-10 Jets get a boost in the Patriot rivals rankings from the football, spies, and videotape saga, but they'll have to take a number and get in line. The Jets are the most-hated rival, but not the greatest. A Boston.com survey asking fans to vote for the Patriots' biggest rival had a landslide winner - the Indianapolis Colts, who drew more than 90 percent of the more than 2,000 votes. The Jets were a distant second.

The Colts are virtually division foes for the Patriots, as the teams have met in the regular season the last five years and faced off in the playoffs following the 2003, 2004, and 2006 seasons. The Colts claimed a 38-34 victory over the Patriots in the AFC Championship game in January, one of the most devastating defeats of the Belichick Era.

After the Patriots avenged that loss by snapping a three-game losing streak against Indianapolis with a 24-20 victory at the RCA Dome Nov. 4, Belichick shared a frosty handshake with Colts coach Tony Dungy, who had evoked the name of Barry Bonds and called it a sad day for the NFL when the Patriots' videotaping punishment was announced.

After the game, defensive end Richard Seymour called the victory, "probably one of the most satisfying wins since I've been here."

The Pittsburgh Steelers raised the Patriots' ire last week with the brash guarantee of second-year safety Anthony Smith, who was victimized several times in New England's 34-13 victory. Afterward, Belichick said the team had seen better safety play. The Steelers have made a habit of mouthing off to the Patriots and reveled in ending New England's NFL-record 18-game regular-season winning streak, 21 games overall, in 2004.

The Patriots and San Diego Chargers are separated by more than 2,500 miles, but that hasn't stopped a budding rivalry. Chargers running back LaDainian Tomlinson said the Patriots "showed no class, and maybe that comes from the head coach" after some players celebrated New England's AFC Divisional playoff victory over San Diego in January by mocking San Diego linebacker Shawne Merriman's "Lights Out" dance.

The Chargers were the Patriots' first opponents after Spygate, and Tomlinson said in the week leading up to the game, "I think the Patriots live by the saying, 'If you're not cheating, you're not trying.' " The Patriots shut down and shut up Tomlinson in a 38-14 victory.

The Patriots also have less-personal rivalries with the Miami Dolphins, a consistent thorn in the side of quarterback Tom Brady, and the Denver Broncos, who have won the last three meetings with New England.

But at 13-0, the Patriots are viewed as everybody's rivals, the NFL's answer to the New York Yankees - the team America loves to hate and wants to beat.

"It'd be about a 31-way tie," Belichick said Thursday when asked about the harshest reception he's gotten on the road.

Patriots safety Rodney Harrison, who still is friendly with Mangini, said the Patriots aren't fueled by all the "garbage" surrounding today's game. However, he admitted that spiteful rivalries exist in the NFL. When Harrison was with the Chargers, the Oakland Raiders inspired enmity.

"There was such dislike for one another, so regardless of what the records were that game was circled on everybody's calendar," said Harrison. "San Diego hated Oakland. Oakland hated San Diego. There was just something there."

That "something" will be present today between the Patriots and the Jets.