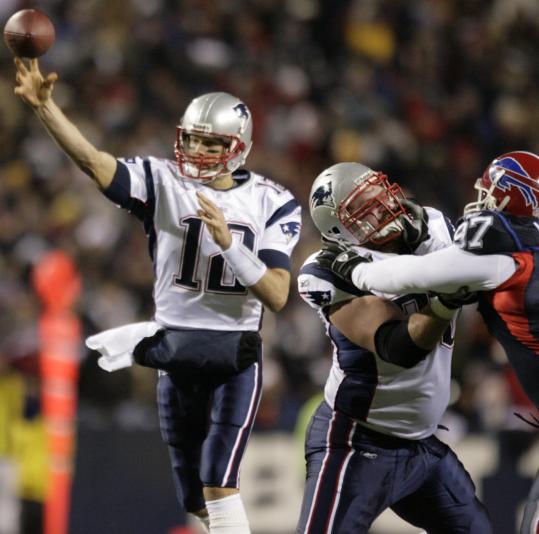 ORCHARD PARK, N.Y. - The Patriots' offense put up some staggering numbers in a 56-10 mauling of the Buffalo Bills last night at frosty Ralph Wilson Stadium.

Randy Moss set a team record with four touchdown receptions in the game - all in the first half - as the Patriots finished with seven offensive scores. That gives them 53 touchdowns, breaking the franchise record of 52 by the 1961 and 1980 squads.

Tom Brady completed 31 of 39 passes for 373 yards and five touchdowns. He wasn't intercepted and wasn't sacked.

It was the fourth time this season but the first time in five games that Brady made it through a game without hitting the turf. For that, he can thank an offensive line that gave him more free time than a Florida retiree.

"They set the tone," an appreciative Brady said.

It all starts in practice and, strangely enough, the linemen didn't have a great week of workouts.

"We've had better weeks," admitted Russ Hochstein, who smoothly stepped in for the injured Stephen Neal (shoulder) at right guard. "But you know, we got the 'W' tonight and in the end that's all that matters."

The Patriots are a perfect 10 in that department and, while their latest win looked easy, there were challenges galore for the linemen. The Bills blitzed a bit more than they have in past encounters and the Patriots regularly utilized four-receiver sets, meaning the line was often left to fend for itself.

"I think it was a great night for us," left tackle Matt Light said. "This is a team that has shown a lot of different looks and was playing well up front. Everybody did their job."

And in the end, it was no sacks allowed, no false starts, no holding penalties. That's the Triple Crown for an offensive line.

"I thought the line was great," coach Bill Belichick said. "Tom was able to step up in the pocket several times, like on that long touchdown [43 yards] to Randy. The line did a good job of handling the blitzes, handling two- and three-man rushes.

"We got some production in the running game, too. Certainly enough to balance the offense."

The lineman of the hour was once again Hochstein. The seventh-year pro stepped in as a starter for the fourth time this season. This was his third time at guard, with the other start at center.

"He's done that for us from Day 1," Light said. "Russ takes the game seriously and whether he's in the lineup or not he's prepared to go. That's been his M.O."

Congratulated on making Brady look good out there, the humble Hochstein responded, "Tom makes us look good, too. Bottom line."

Offensive lines regularly ply their trade in anonymity, but the Patriots blockers are starting to get noticed nationally. Left guard Logan Mankins, center Dan Koppen, and Light all had their names pop up on various midseason all-star teams.

While Light is the only one of the bunch make a Pro Bowl, having earned his first berth last season, it seems there could be more in the future.

But in true lineman fashion, you can save the accolades for someone else and some other day.

"All we care about is winning football games," Koppen said. "That's all we focus on."