Faulk always willing to chip in 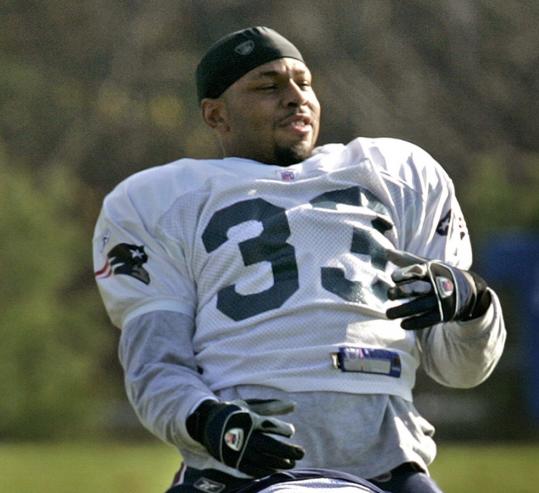 FOXBOROUGH - If the bone-jarring, crowd-pleasing hit is at one end of the football spectrum, this play is at the other. Its importance, however, is not overlooked by the Patriots.

The running back lines up alongside the quarterback in shotgun formation. As the ball is snapped, the back releases into the early steps of a pass pattern. Yet before crossing the line of scrimmage, he makes a pit stop to hit an oncoming pass rusher who is being blocked by an offensive tackle. Then he continues his route.

The play, called a chip block, is generally not worthy of a highlight on "SportsCenter." But an effective chip with sweet synergy between running back and offensive tackle is the type of highlight that does make its way onto the projector screen in the Patriots' meeting room.

Chalk it up as a small thing that makes a big difference, contributing to the generally solid pass protection quarterback Tom Brady (10 sacks in 309 dropbacks) has enjoyed this season.

And if it seems like the Patriots are calling on it more often, it's probably because they are. Chipping, players explained, can be an effective strategy against teams with speedy defensive ends, and the Patriots have faced several this season. Sunday's opponents, the Buffalo Bills, are next in line with relentless ends Aaron Schobel and Chris Kelsay.

A chip, it turns out, can be an offensive tackle's best friend.

"It helps when you have fast guys and very talented rushers coming off the ends, so you're not isolated one on one with them," explained right tackle Nick Kaczur.

Added left tackle Matt Light: "You use it whenever you have a premier guy rushing. You mix it in there, but can't do it all the time. You do it every once in a while to give them something to think about."

The Patriots' designated chipper is most often Kevin Faulk. One of the smaller players on the team at 5 feet 8 inches and 202 pounds, Faulk explained that the Patriots work on chipping almost every day of practice. While it might appear to be an easy skill to master to the casual fan - just run straight ahead and whack the rusher - there are key elements that must be perfected to be effective.

First and foremost, it's timing.

The running back and tackle must be in synch so the tackle knows when the contact is coming. Otherwise, the chip can actually be more disruptive, making it more challenging for the tackle to hold his block.

"If he hits a guy, and you're not looking for it, that can knock him all the way inside and off your block, and it can get bad that way," Light said. "Or if he runs into you instead of the defender, it can be bad. But that's usually not the case when you know it is happening."

Added Kaczur: "That's why you have to work with each other to get a feel for how guys like to do it. Kevin has been around a long time so he knows where to do it and lets you know when he's going to do it."

The second important aspect to an effective chip is power. Because Faulk is often giving up 50-75 pounds to the ends he is chipping, he must generate enough positive momentum to stunt their progress.

Tight end Kyle Brady believes Faulk does a nice job in this area.

"He's more of a squattier-type guy, and he gets under guys and delivers a blow with his legs and hips, and it really stops a guy's charge and can knock the wind out of him at times," Brady said. "That can be really a bigger factor than people realize. Most might not notice it, but when you have a fast edge rusher, after one or two times that happens to him, he's thinking about it and maybe it's taking a little something off his upfield charge."

In past years, when the Patriots have supported their tackles with an extra blocker against speed rushers, it was commonplace to see tight end Daniel Graham provide assistance. Yet Graham left the team via free agency, so that role most often falls to Brady.

Yet Faulk's chips, which some players approximate can be called 5-8 times per game against speed rushers such as Miami's Jason Taylor and Indianapolis's Dwight Freeney, have also been an important part of the mix.

The final part of the equation is Faulk releasing into his pass route, and being in position to catch the ball, if necessary. In that case, it is crucial to get up to speed quickly.

Faulk said there should be no praise tossed his way for chipping, because it's part of the job description that he's been carrying out over his nine-year career, and other teams also execute it effectively.

But talk to the team's offensive tackles and it's clear that they appreciate how a small part of the game can help in a big way.

"Every running back, I'm sure, has had to work on chip blocks in the past, so it's not rocket science, but at the same time it's easy to miss or have a problem with it," Light said. "I think Kevin does a great job with it."