Work at Gillette continues despite having week off 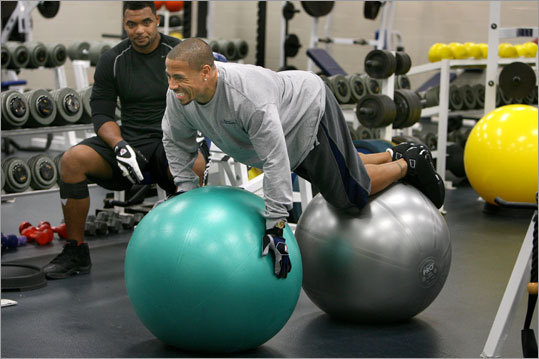 FOXBOROUGH - It's Wednesday morning at 8:30, smack-dab in the middle of bye week. Patriots coach Bill Belichick has given his players the week off, a reward for a 9-0 start. For the most part, they have scattered faster than Randy Moss running a deep route. The playing field at Gillette Stadium has the New England Revolution soccer markings on it, and the weight room is empty, except for players such as Richard Seymour, Rodney Harrison, and Troy Brown, who are recovering from injuries or making up for lost time.

But in an unmarked office on the administrative level, Belichick already has been hard at work for 2 1/2 hours.

Dressed in jeans, sneakers, and a gray sweatshirt, clicker in hand, he's watching video of the Buffalo Bills, scribbling names and numbers of a team the Patriots already dismantled by 31 points earlier in the season.

Belichick has a vacation house in Nantucket, where the November pace is peaceful, the migrating birds plentiful, the moors are still crimson red, and the island fishermen currently are harvesting some of the finest bay scallops in the world.

So, Coach, why aren't you there?

Belichick looks up from the screen. He seems relaxed; he even chuckles out loud.

"Those scallops would be good," he concedes before refocusing on the screen. "But maybe I'll be in Annapolis [visiting his mother later in the week] having some crabs."

Coach, are you a workaholic?

"I enjoy what I do," he says, no longer smiling. "I've got a couple of days that I've got to get caught up on some things. Still getting caught up on some stuff from Indy and Buffalo. Try to get a few things done early in the week and back off here at the end a little bit."

Patriots insiders say Belichick never has given the team the entire bye week off.

"They're off till Monday," he says. "They worked hard. They've been going since the end of July. They can use a little break; we all can."

Asked what he does to relax, Belichick pauses and looks past the computers.

"This week I'll be hanging out with my kids. I'll be relaxing," he said.

Asked to respond to former Miami coach Don Shula, who initially suggested that if the Patriots match his 1972 Dolphins' perfect season, an asterisk should be attached because of the "Spygate" controversy in which both Belichick and the Patriots were fined and the team lost a first-round draft choice.

Belichick stares at his computer. His hand pushes play, but his answer suggests go away.

Further review
Down the hall, tight ends coach Pete Mangurian, coffee in one hand, remote control in the other, sits in a darkened room reviewing more video of Buffalo.

How long is he going to sit there?

"As much as it takes to get it done," he answers. "We've all got our jobs to do. We all split it up and then when we get together again we're all ready."

Mangurian says the work is not boring.

"Every team is different, sometimes it's a little more, sometimes a little less. We've all got a piece of the puzzle and we all do our piece."

Mangurian has a spiral notebook in front of him, the pages filled with penmanship-perfect notes. Above him a sign has eight slogans. The last one reads "Good Technique."

Mangurian doesn't work 9 to 5, either.

"I'll be here to whenever I get done," he explains. "We're just being thorough and doing things the right way."

Video review is a first step, he adds.

"First of all, we get all the information we need, we put it together as coaches, and at that point you decide what you're going to give to the players. You've got to have background information before you make a presentation, and that's what this is."

He says this is not your father's NFL.

"Everybody changes. That's what this league is about. Everybody changes week to week. There's personnel changes and we don't want to take anything for granted. If we find tendencies, great, but people adjust and you've got to make sure you're adjusting with them."

Working out the kinks
Downstairs, near the Patriots' locker room, is the state of the art gym. On the wall is a plaque of summer workout achievers who have their pictures displayed and received preferred parking spaces.

Action photographs and mirrors line the walls. There seems to be enough room here for the Patriots and the Back Bay.

Brown, the team's all-time leading pass receiver, is rehabbing from a knee injury. He skips rope and then declares, "I've still got some moves."

Seymour, the five-time Pro Bowl defensive lineman who missed the first seven weeks of the season following offseason knee surgery, is hard at work with Harrison, lifting weights, working with a medicine ball, and doing agility drills. He makes the speed bag sound like an extra drum accompanying the rap music that resounds in the gym.

"I'm just putting in my work to be in the best shape to accomplish our ultimate goal," he says. "I've got a God-given ability and then I improve on that."

That's why he and Harrison needle one another constantly, the way brothers do. He says trash talk motivates him.

He says the team badly needed a bye.

"We really haven't had a break physically or mentally. Even though I'm back only two weeks, I've been watching game film from last year and training hard . . . so it's time I'm going home."

On the way home to see his alma mater, the Georgia Bulldogs, take on Auburn Saturday, Seymour was asked if Belichick was being soft on the perfect Patriots.

"I've never used the word 'soft' in terms of football," Seymour says. "Is he taking care of us? Yeah. But we put ourselves in the right position for that."