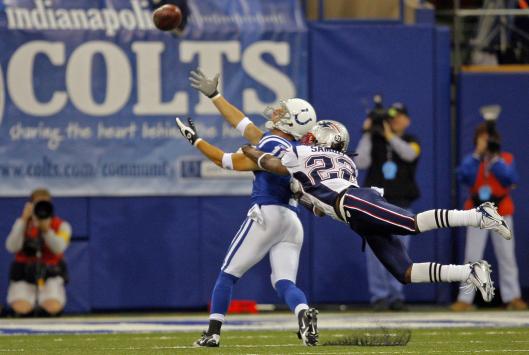 INDIANAPOLIS - The Patriots were playing flag football yesterday against the Indianapolis Colts and it wasn't by design.

New England accrued 10 penalties for a franchise-record 146 yards, but overcame the insidious infractions to score a 24-20 victory.

"We got really good short-term memory because we were really poor," said linebacker Tedy Bruschi. "We just had to do our best to forget those because when you have a penalty like that you can't really complain to the ref. The flag's on the ground. What are you going to do? You got to just move on. This game, we just had to do a lot of moving on."

Entering the game the Patriots had been flagged for 40 penalties with 37 of them accepted. They had five for 102 yards in the first half, including two pass interference penalties that set up the Colts' first two scores, both Adam Vinatieri field goals.

Asante Samuel was whistled for a 37-yarder on Anthony Gonzalez in the first quarter and Ellis Hobbs was flagged for a 40-yarder on Reggie Wayne in the second quarter.

Matt Light also had two penalties that contributed to Indianapolis points. Late in the first half, with New England leading, 7-6, and in field goal range, a 15-yard penalty on Light for a leg whip pushed the Patriots back to the 38. On the next play, Tom Brady tried to find Donte' Stallworth on a deep pass, but he was intercepted by safety Antoine Bethea at the 2 with 1:46 left in the half. That led to Joseph Addai's 73-yard catch-and-run TD.

In the fourth quarter, following a Gary Brackett interception, Light incurred a 15-yard unsportsmanlike conduct penalty that was tacked on to the end of Brackett's 28-yard return. That gave the Colts the ball at the Patriots' 32 and the result was a 1-yard Peyton Manning sneak that gave the Colts a 20-10 lead with 9:42 left in the game.

Playing in just his second game of the season, Richard Seymour didn't take long to make his presence felt.

On the Colts' opening drive Seymour turned the tide when he tackled Kenton Keith for a 5-yard loss on second and 10 from the New England 23. He then got a hand on Vinatieri's 50-yard field goal attempt, which was no good.

Seymour finished with five tackles. He said he's still rounding into form. "I'm not there yet, but I think I'm moving in the right direction. Hopefully, the next few weeks here I'll be where I want to be. It's kind of like my second week of training camp."

The Patriots' much-maligned red zone defense, which entered the game last in the NFL, allowing a 72.2 percent touchdown rate (13 TDs in 18 opponents' possessions), rose to the occasion twice in the first half after the pass interference penalties gave the Colts first-and-goal situations.

"I thought our red zone defense was good," said coach Bill Belichick. "We got some big stops down there early, held them to field goals, and that was important. It hasn't been a strength for us this year. It was today."

Tight end Benjamin Watson was back in action after missing the last two games with an ankle injury he suffered during the second quarter of the Patriots' 48-27 victory over the Cowboys Oct. 14, when he was hauled down from behind by safety Roy Williams.

Watson finished with two catches for 10 yards, both on the Patriots' first scoring drive.

Watson converted a key third down, giving the Patriots first and goal at the 4 with a 6-yard reception on third and 3 from the 10.

Receiver Wes Welker came up big in the fourth quarter, as a receiver and punt returner. He had five catches for 38 yards and hauled in a 3-yard TD with 7:59 left.

Welker capped his strong finishing kick by catching a 10-yard pass from Brady - on third and 6 - to help the Patriots run out the clock. "As usual, Wes makes a lot of big plays for us," Belichick said. "He did a nice job in the return game and had some key catches."