Colts kicking themselves after this 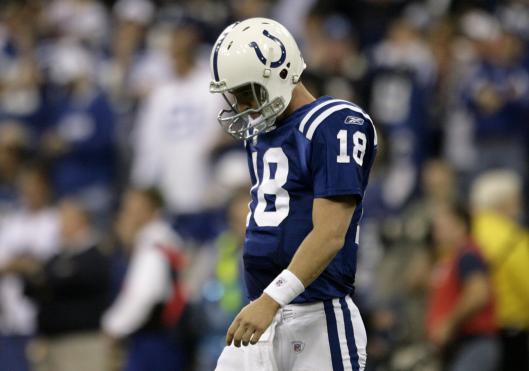 INDIANAPOLIS - The craziness began yesterday with the referee fumbling the coin just as he was about to make the pregame flip. And it ended with the Colts fumbling a late 10-point lead almost as grievously as the Patriots squandered an 18-point advantage in last January's AFC Championship game.

Truth be told, however, the Colts cost themselves a victory as much with their early ineptitude as they did with their fourth-quarter collapse, they acknowledged after their fall-from-ahead 24-20 loss in the RCA Dome.

Long before the Colts let the Patriots strike for two unanswered touchdowns in the final eight minutes, they hurt their chances to prevail in the battle of the unbeatens when they generated three scoring opportunities early in the game and mustered only a pair of Adam Vinatieri field goals.

On one drive, they settled for a field goal after surging to within 3 yards of the end zone. On another, they drove to the 7 before settling for 3 points.

On the other, they reached the 32 before Richard Seymour tipped Vinatieri's 50-yard field goal attempt.

"It's frustrating when you're in the red zone and don't capitalize with touchdowns," said Jeff Saturday, the Colts' Pro Bowl center. "Even the field goals are frustrating. You know when you don't punch it in, that's always going to give a team like the Patriots opportunities, and it came back to get us."

"That is something that we are always trying to avoid," said Colts quarterback Peyton Manning, whose passing attack was compromised by the absence of eight-time Pro Bowler Marvin Harrison and the Patriots' defense.

Manning, who passed for an average of 332 yards and two touchdowns in his last three games against the Patriots, finished with 225 yards and one touchdown.

The dip in Manning's passing production was offset in the first half by the prodigious rushing of Joseph Addai, who amassed 80 of his 114 yards on the ground before the break.

Addai also ran a short pass from Manning 73 yards for Indianapolis's lone touchdown in the first half, giving the Colts a tenuous 13-7 edge.

But when the Patriots all but shut down Addai in the second half - he mustered only 39 of his 226 total yards after the break - Manning and Co. failed to make up the difference. In fact, they aggravated matters, with Manning throwing an interception to kill one drive and fumbling to squander another despite scoring Indy's only points of the second half on a 1-yard sneak. The touchdown gave the Colts a 20-10 lead with 9:42 to play.

"We should have definitely put the nail in the coffin towards the end," defensive end Dwight Freeney said. "We have to learn from it. It will be a travesty if we don't."

After holding New England's historic offense to 10 points through 52 minutes, the Colts committed their biggest mistake when they let Randy Moss break free and snare a 55-yard pass from Tom Brady that set up Brady's 3-yard touchdown toss to Wes Welker.

"We let [Moss] get behind us, which all our guys are disappointed about," Colts coach Tony Dungy said.

Moss then figured in one of Brady's three straight completions - Donte' Stallworth caught another - that ended with Brady connecting with Kevin Faulk for a 13-yard touchdown strike, the eventual winner.

"We didn't have an answer for Randy Moss," Dungy said.

Nor did they ultimately have an answer for the Patriots, who snapped the Colts' 12-game winning streak and diminished their chances of gaining home-field advantage in the playoffs.

As consolation, the Colts said they proved they can play with the Patriots, who had blown out everyone else on their schedule. And they clung to their pregame mantra that, win or lose, there is plenty of football yet to play.