Newton struggles in 16-10 loss to Bucs 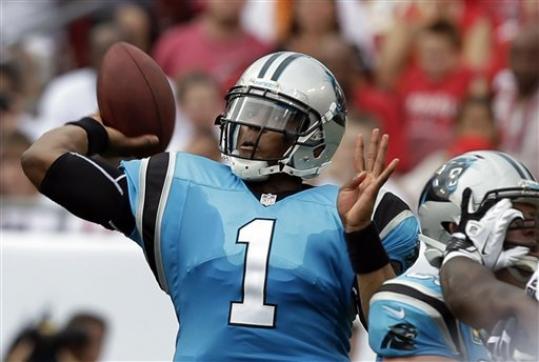 TAMPA, Fla.—Two of Cam Newton's biggest games in his Offensive Rookie of the Year season came against Tampa Bay a year ago.

The Bucs let the Carolina quarterback kno Sunday they intend this year to be different, sacking Newton three times and intercepting him twice in the second half of Sunday's 16-10 season-opening victory.

Newton threw for 303 yards and one touchdown. But the Panthers were shut out in the first half, and interceptions by Ronde Barber and Ahmad Black, and Aqib Talib's blocked punt thwarted Carolina's chances of overcoming the slow start.

"Without any of those interceptions, I think we find a way to win this football game," Newton said. "I feel as if that was the difference in the game."

The Buccaneers kept the heat on Newton all day, leaving him little room to throw and even less to run.

A defense that allowed an NFL-worst 494 points and ranked last against the run limited the Panthers' running game to 10 yards as the Bucs won their debut under coach Greg Schiano.

"You can't win the game with turnovers," Newton said. "The Bucs did an excellent job of capitalizing on field position, and I've got to do a better job of protecting the football."

Carolina outscored the Bucs 86-35 in a pair of lopsided victories last December, with Newton throwing for four touchdowns and running for four more in the two games.

The Bucs wasted little time Sunday showing that wasn't going to happen again. In fact, the start is where this game was lost from the Panthers' point of view.

"They brought the intensity. We were kind of stagnant in the first half," said Steve Smith, who caught seven passes for 106 yards. "The first quarter, it was like they were the rabbit and we were the tortoise."

The Bucs drove 80 yards to a touchdown the first time they got the ball and led, 13-0, at halftime.

"We made a couple of mistakes and were flat on the first series on defense. The offense struggled a little bit, and they played very well," said Panthers coach Ron Rivera. "We responded in the second half and scored early, but unfortunately we couldn't score (a touchdown) again."

Josh Freeman threw a 6-yard, first-quarter touchdown pass and Connor Barth kicked field goals of 36, 20 and 40 yards for Tampa Bay, the latter set up by a blocked punt late in the fourth quarter. Defensively, the Bucs held the Panthers to 10 yards rushing, with Newton gaining 4 yards on five carriers and DeAngelo Williams managing minus-1 on six attempts.

Replacement officials appeared to do just fine. Tampa Bay requested the only replay challenge, on a 16-yard, sideline reception by Carolina's Smith in the second quarter, and the ruling on the field that the receiver got both feet inbounds, was upheld.

Freeman completed his first eight passes, making use of three of the newcomers brought in to help him after the Bucs ranked 30th in rushing offense and 27th in points scored last season.

Rookie Doug Martin ran five times for 21 yards and caught a pass for 11 yards and receiver Vincent Jackson had a 7-yard reception on third-and-2 to set up Tampa Bay's only touchdown. Tight end Dallas Clark gained 33 on his first catch as a Buc, leading to Barth's 36-yard field goal for a 10-0 lead.

Newton threw for a league rookie record 4,051 yards and also set a single-season mark for TDs rushing by a quarterback, while accounting for 35 touchdowns: 21 passing and 14 on the ground. He threw a 22-yard TD pass to Brandon LaFell on Carolina's first possession of the second half, but couldn't get his team into the end zone again.

A late Panthers drive stalled at the Bucs 3, where they settled for Justin Medlock's 21-yard field goal, trimming Tampa Bay's lead to 16-10 with 2:46 remaining. But the Carolina defense was unable to get the ball back, with Freeman running out the clock with help from Martin, who finished with 95 yards rushing on 24 carries.

NOTES: The Panthers flew to Florida four days early to prepare for the game in nearby Bradenton because the Democratic National Convention was scheduled to use Stadium, which is adjacent to the team's practice fields. ... Barber is making the transition from cornerback to safety in his 16th season. Although he spent most of the game at safety, he actually started at cornerback because Tampa Bay opened the game in a nickel package.