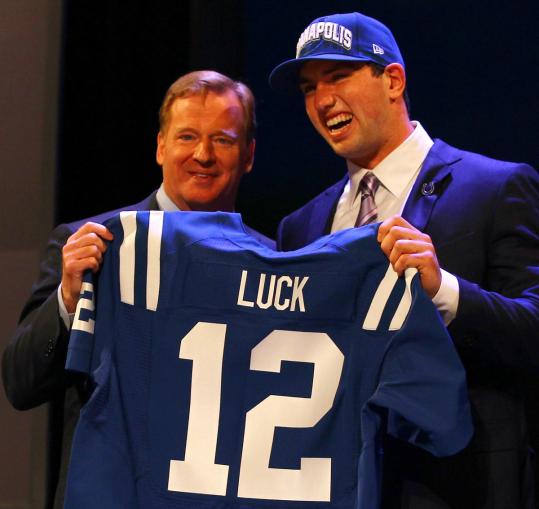 Andrew Luck knew exactly where he was heading and the daunting task he faces.

So did Robert Griffin III.

What the NFL draft lacked in surprise and suspense with its top two picks, it certainly delivered in challenges for the league’s newest stars.

Luck, the Stanford quarterback and overall No. 1, heads for Indianapolis, where he must replace Peyton Manning, who merely won four MVP awards and a Super Bowl. RGIII answers the call in Washington, where he will try to soothe a devout but highly critical fan base.

“You don’t really replace a guy like that,’’ Luck said. “You can’t. You just try to do the best you can. Obviously, he was my hero growing up.’’

His selection as the top pick was hardly a stunner. The Colts informed Luck last week that commissioner Roger Goodell would announce his name first. Right behind him was Griffin; no suspense attached to that pick, either.

After being loudly booed at the outset, Goodell told a raucous crowd at Radio City Music Hall that “the season begins tonight, so let’s kick if off.’’ Then he did, congratulating Luck while the crowd chanted “RG3, RG3.’’

Luck left the stage, slapped hands with some fans in Colts shirts and headed to the interview room.

To get Griffin, Washington dealt a second-round pick this year and its first-rounders in 2013 and ’14 to St. Louis to move up four spots. But they wound up with the Baylor QB who beat out Luck for the Heisman Trophy.

Less than an hour before Goodell began the draft, Cleveland and Minnesota pulled off a trade in what would become a virtual swap shop, with eight deals on opening night. The Browns moved up just one spot, from fourth to third, to ensure getting running back Trent Richardson of national champion Alabama. Minnesota received picks in the fourth, fifth, and seventh rounds and still was in position to get one of the elite prospects in this draft with the fourth spot overall, Southern California offensive tackle Matt Kalil.

Indianapolis was the only team in the first seven picks to stay put.

“It just goes to show you that anything can happen,’’ Blackmon said, referring to the Jaguars going after him.

St. Louis must have liked dealing down because the Rams did it again, trading with Dallas, which was 14th overall. The Cowboys selected LSU cornerback Morris Claiborne. St. Louis got a second-rounder in the deal.

A third quarterback went eighth, where Miami stayed put. The Dolphins took Texas A&M’s Ryan Tannehill, who played wide receiver for most of his time in college. His coach at A&M, Mike Sherman, is the Dolphins offensive coordinator.

Minnesota also traded back into the round, getting Baltimore’s No. 29 slot and selecting Notre Dame safety Harrison Smith.

Tampa Bay also got back into the first round at No. 31, dealing with Denver, then taking Boise State running back Doug Martin.

The Super Bowl champion Giants concluded a swift but hectic round by choosing Virginia Tech running back David Wilson.

Have fans seen the last of the Pro Bowl?

The game could be suspended next year, two people familiar with discussions said.

Goodell, among others, expressed concerns about the quality of play after January’s game, and the league has been holding talks with the players’ union about the future of the all-star game. The people spoke on condition of anonymity because the talks were not being publicized.

Responding to an ESPN report that Goodell is “strongly considering’’ suspending the game in 2013, NFL spokesman Greg Aiello said: “No determination has been made yet.’’

Saints general manager Mickey Loomis said he is “angry’’ about allegations that his Superdome booth was wired so he could eavesdrop on opposing coaches radio conversations. Loomis said he has a clear conscience and welcomes a joint investigation by Louisiana state police and the FBI. Loomis also understands that Drew Brees’s next contract will be the most important one he has ever done and he pledges it will eventually get done.

Police in Arlington, Va., said Redskins safety Brandon Meriweather has been arrested and charged with driving under the influence after he refused a breath test. The former Patriot was pulled over shortly before 3 a.m. Thursday on Interstate 66 outside of Washington and failed a sobriety test after refusing a breath test . . . Authorities in Texas have issued two arrest warrants for Ryan Leaf, declaring the former NFL quarterback is a fugitive from justice. The Texas prosecutor who brokered a 10-year probationary sentence for Leaf two years ago on drug and burglary charges filed a motion to revoke Leaf’s probation earlier this month. Leaf made an initial appearance on the warrants Wednesday via video from the jail in Cascade County, Mont. His total bond is now set at $126,000. Leaf was arrested in Great Falls March 30 and again early on April 2. Authorities said that both times he was found in possession of oxycodone taken from other people’s residences. Leaf is scheduled to be arraigned May 3 in the Montana case . . . A judge dismissed an assault charge against Bengals linebacker Rey Maualuga on Thursday after learning the dispute was settled in mediation . . . The Super Bowl champions Giants signed tackle Shaun Rogers. The 12-year veteran is a three-time Pro Bowler . . . The Steelers agreed to terms with veteran backup quarterback Byron Leftwich. Terms of the one-year deal were not disclosed.