Right pieces are in place

Game has all the ingredients for a shootout 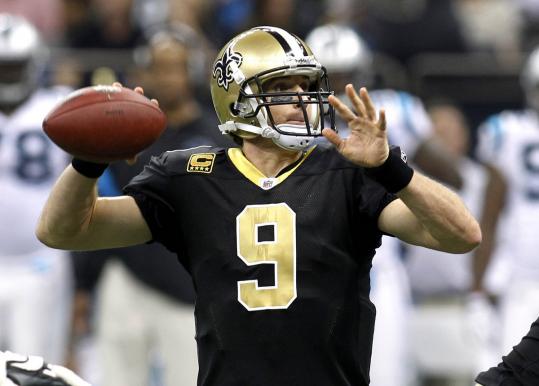 NEW ORLEANS - Sean Payton cautioned against assuming that a game featuring prolific quarterbacks Drew Brees and Matt Stafford would escalate into a shootout.

If Payton really believes that, it is only because coaches must consider wide-ranging possibilities and show respect to players on both sides of the ball.

Odds-makers have different priorities, and they’ve set the over-under at 59 1/2 for tomorrow night’s first-round playoff game between the Detroit Lions (10-6) and New Orleans Saints (13-3). That is the highest ever for an NFL playoff game - likely because no game has ever involved two quarterbacks coming off seasons quite so good.

Brees set NFL records for passing yards (5,476) and completion percentage (71.2) this season, while Stafford joined Brees as two of only four quarterbacks ever to pass for more than 5,000 yards in a season. Moreover, Brees and Stafford will be in ideal passing conditions inside the Superdome.

Brees said he could understand why an offensive feast could be expected when the Lions return to the Crescent City for the second time this season, but he also agreed with his coach that assuming how a game will play out can be risky.

“Obviously, I know how explosive Detroit is offensively,’’ Brees said. “I also know that I think we feel like we’re playing [good] football as a team and as an offense. But you know, it seems like, typically, when you get weeks like this where everybody’s hyping up one side of the ball . . . and kind of predicting it to be a shootout or whatever, the defenses are off kind of quietly in the corner making sure they come out with their best performance.’’

The previous high over-under was 57 when Brees’s Saints hosted Arizona in the 2009-10 divisional round, and it was the over that hit by 2 when the Saints rolled to a 45-14 victory.

The record for points scored in a playoff game is 96 - a 51-45 Arizona victory over Green Bay, also in the 2009-10 season, the week before that same Arizona team took its Big Easy beating.

Statistically, there are plenty of reasons to anticipate the Saints and Lions racking up loads of yards, if not points. When these two quarterbacks last shared the field in a Sunday night game Dec. 4, Stafford completed 31 of 41 passes for 408 yards, while Brees connected on 26 of 36 for 342 yards. New Orleans won, 31-17, but Detroit might have scored more if not for a rash of penalties, including several offensive pass interference calls and a personal foul. Stafford threw an interception and was sacked three times and the Lions also had one field goal blocked.

“We can’t shoot ourselves in the foot. We can’t hurt ourselves in penalties,’’ Stafford said this week. “We had over 100 yards of offense called back. Those yards would have led to points . . . We did some things that were really unfortunate. You do that against another team that is playing good football, it’s going to be tough to win.’’

After that game, Brees continued on his record-smashing pace, while Stafford finished with 5,038 yards, behind only Brees and the Patriots’ Tom Brady (5,235).

The defenses of both clubs finished near the bottom of the league in yards allowed - Detroit 23d and the Saints 27th.

However, players on both squads contend that the yards allowed statistic can be misleading. More important, they say, are third-down and red-zone stops. Lately, the Saints’ defense has begun to produce more turnovers while preventing big plays and limiting touchdowns, forcing teams to settle for field goals.

During New Orleans’s eight-game winning streak to end the regular season, opponents scored 20 or fewer points six times, and no team scored more than 24. That’s a statistic that Lions coach Jim Schwartz seemed to care about more than most.

“The thing that gets lost in this whole offensive explosion they have had is that the most points the [Saints’] defense has given up in the last [five] weeks has been 20 points,’’ Schwartz said. “That is very good with so many explosive offenses in the NFL.’’

Saints defensive coordinator Gregg Williams said his team will use every tool within increasingly stringent rules regarding helmet hits to plant the threat of pain in the minds of a talented Detroit receiving corps led by 6-foot-5-inch Calvin Johnson.

“We do play very physical and one of the things that we do is, guys that are 6-5 end up being 5-5 when they get flipped over on their head,’’ Williams said. “They didn’t say the rule says that the ground couldn’t hurt their head, so we’ve got to find ways to make the ground be a part of it.’’

Detroit’s defense allowed Green Bay backup Matt Flynn to throw for 480 yards and six TDs in a 45-41 loss last Sunday. Still, Detroit has some feared defensive play-makers, and some of them, including tackle Ndamukong Suh, safety Louis Delmas, and cornerback Chris Houston, did not play in the first trip to New Orleans. Rookie lineman Nick Fairley had a sack, but missed much of the game with pain in his left foot.

Meanwhile, Detroit ranks third in the NFL in stopping teams on third down, even better than New Orleans, which ranks fifth.

“There’s no telling what’s going to happen,’’ Lions cornerback Eric Wright said. “They’ve got the ability to put up as many points as you can imagine, but every week is different . . . I’m just glad we’ve got some guys back that we didn’t have the last time we were down there. I always like our chances to avoid a shootout because we have a good defense. You can’t let one game make you forget how you look at yourself.’’