One more, for the aged

Steelers know this could be the last one together 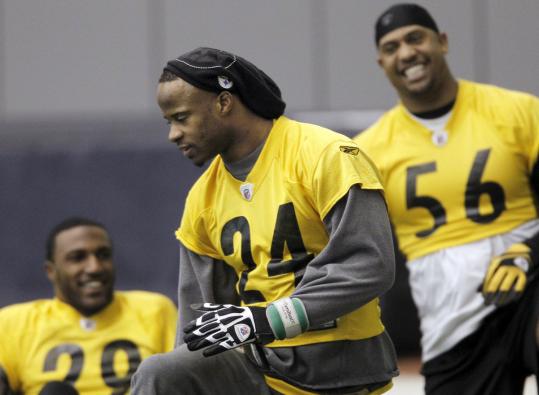 Ike Taylor (24) has spent his nine-year career in Pittsburgh, one of the many 30-somethings playing on the Steelers’ defense. (Keith Srakocic/Associated Press)
By Will Graves Associated Press / January 6, 2012
Text size – +

James Farrior stood in front of the whiteboard at the entrance of the Steelers’ locker room and grabbed a marker. Just in case some of his younger teammates don’t understand what’s at stake over the next month, the linebacker - who turns 37 today - decided it was time for his colorful annual reminder.

“Don’t [expletive] mess with my money,’’ Farrior wrote, then outlined the bonus each player receives depending on how far his team goes in the playoffs, including the $88,000 that comes with getting to the Super Bowl.

Posting the note has become routine for Farrior at the start of each playoff run, though this message was a little more impassioned than most.

The defending AFC champions begin their quest for a seventh Lombardi trophy Sunday at Denver in the wild-card round, perhaps the last time the core group of the league’s top-ranked defense will make a playoff push together.

Farrior is in his 15th season. Linebackers James Harrison and Larry Foote, defensive linemen Casey Hampton and Brett Keisel, and defensive backs Troy Polamalu, Ryan Clark, and Bryant McFadden are all in their 30s and closer to the end of their careers than the beginning.

They’ve been the backbone of a decade-long run that rivals the four championships the franchise captured in the 1970s, winning two titles and narrowly missing a third in a 31-25 loss to Green Bay in last year’s Super Bowl.

“It has to come to an end soon,’’ said defensive end Aaron Smith, who is out for the year with a herniated disc and unsure whether he’ll return for a 14th season next fall. “We’re all getting older. We can’t play forever although we’d like to.’’

The signs of age are starting to show. Harrison missed a month in the middle of the season with a fractured right orbital bone and missed practice yesterday due to a problematic toe injury. So did Keisel, who is nursing a strained groin and Polamalu, who is dealing with a tender calf.

All three are expected to play against the Broncos (8-8), though the defense will be without Clark, who was taken out of the lineup by coach Mike Tomlin because of a sickle-cell trait that becomes aggravated when playing at altitude.

It’s been that way most of the season for the Steelers, who finished No. 1 in the league yards allowed, points allowed, and pass defense despite spending most of the year going with a patchwork lineup.

Harrison and LaMarr Woodley have only played alongside each other for a quarter since Oct. 2, when Harrison injured his eye in a loss at Houston.

Harrison returned a month later, a week after Woodley went down with a strained left hamstring that’s dogged him ever since.

The defense will be tested Sunday by the NFL’s best running game. The Broncos’ numbers are a bit deceiving, though. They pile up yards on the ground, but not points.

The Broncos led the league with a 164.5-yard average and set a franchise mark with 2,632 yards rushing. Yet, they ran for just 11 touchdowns, including six by scrambling quarterback Tim Tebow and four by resurgent running back Willis McGahee.

“It’s definitely helped us get to where we are,’’ coach John Fox said. “at the end of the day, we have improved every week. We’re doing it against loaded boxes, which is why we need to get the other phase on our offense rolling.’’

While the Broncos have run roughshod over opponents, they’re 31st in the league passing the ball, better only than Jacksonville’s abysmal attack.

“Our goal is just to be balanced, to continually keep defenses off-balance by not knowing if it is run or pass, and be able to hit big play-actions,’’ Tebow said.

While the mood has been mostly melancholy at the team’s Dove Valley headquarters this week, McGahee has been jazzed as he prepares to face the NFL’s top defense.

And why not? At 30, he joined Ricky Watters as the only NFL running backs to top 1,000 yards for three teams with his 1,199-yard season, which included seven 100-yard games, tied with Houston’s Arian Foster for the league lead.

Steelers quarterback Ben Roethlisberger practiced yesterday, but remains bothered by a sprained left ankle heading into Sunday’s wild-card game in Denver. Offensive coordinator Bruce Arians said Roethlisberger was “moving around OK, not as good as he was.’’ The injury limits Roethlisberger’s mobility, but Arians said there are no plans to consider putting backup Charlie Batch into the lineup. Center Maurkice Pouncey did not practice after his sprained left ankle developed additional soreness. Arians said he’s concerned Pouncey may not be able to play.