THIS STORY HAS BEEN FORMATTED FOR EASY PRINTING
Colts 19, Texans 16 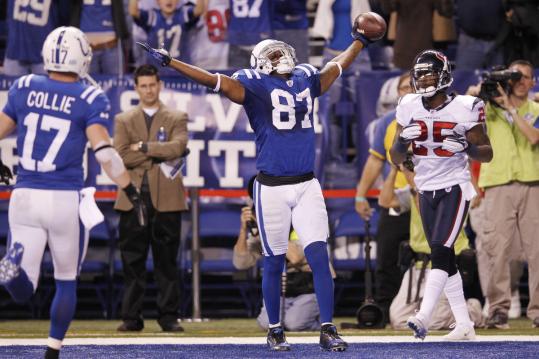 INDIANAPOLIS - Reggie Wayne, the wideout with the expiring contract, caught a 1-yard touchdown pass from Dan Orlovsky with 19 seconds left to give the Colts their only lead of the game in a 19-16 victory over AFC South champion Houston last night.

It was the second straight win for the Colts (2-13), who will now have to fight off St. Louis and Minnesota for the No. 1 overall draft pick.

When Brian Cushing broke through the line on the game’s first play, sacking Orlovsky and stripping the ball, it looked like it might be a replica of the teams’ first meeting, a 34-7 blowout. Arian Foster ran for 8 yards on the next play, then scored on a 9-yard burst off the left side to give Houston a 7-0 lead.

Foster carried 23 times for 158 yards, but the Colts repeatedly stopped the Texans’ runners in the red zone.

Nobody got into the end zone again until Orlovsky took the Colts 78 yards in the final two minutes, thanks in part to three costly Houston penalties, two of them against rookie defensive end J.J. Watt. After a pass interference call against Glover Quinn put the ball at the Texans’ 1, Orlovsky lobbed the ball into the corner of the end zone and Wayne (8 catches, 106 yards) beat the coverage.

The game could go down as the final home game for not only Wayne, but also Colts cornerstones such as Jeff Saturday and Robert Mathis - and possibly even Peyton Manning, though Colts owner Jim Irsay told NFL Network that if the four-time MVP plays in 2012, it will be in Indianapolis.

“If the situation is where he’s back and he’s healthy, then I see him coming back and playing here,’’ Irsay said before the game. “I think there is a lot of speculation about the draft pick . . . but I think what you have to realize is this - is the likes of Peyton Manning going to be seen again? It is not coming, if ever, for a very, very long time.’’