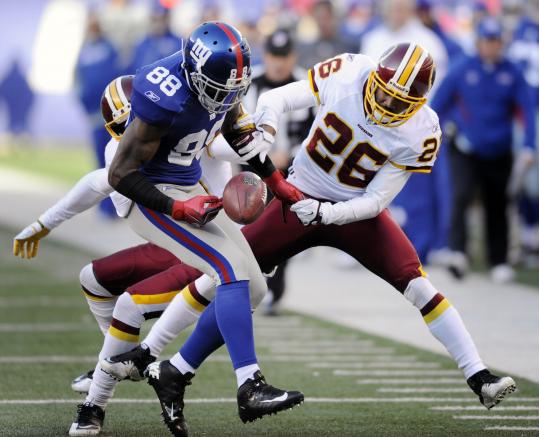 Very little went right for the Giants in a lackluster effort, such as this pass to Hakeem Nicks that was broken up by the Redskins’ Josh Wilson. (Bill Kostroun/Associated Press)
Associated Press / December 19, 2011
Text size – +

If the New York Giants miss the playoffs once again, they have only themselves and the Washington Redskins to blame.

Rex Grossman threw a touchdown pass and the Redskins put a major hurt on the Giants and their playoff hopes with a dominating 23-10 victory yesterday in a game in which New York showed little desire at home with much on the line.

“I’m very disappointed in how we played today,’’ coach Tom Coughlin said after the Giants (7-7) fell a game behind Dallas (8-6) in the NFC East with two games left in the regular season.

“I accept responsibility for it. But I expected to see more - quality execution - and we didn’t get that.’’

This loss was the fifth in six games for the Giants, who are in danger of missing the playoffs for the third straight year. The scenario has been the same each season: New York starts the season quickly and then falters down the stretch, playing some unbelievably bad games with the postseason on the line.

If the Giants beat two of their biggest rivals, the Jets and Cowboys, in their final two games, they will win the division. The Cowboys play the Eagles next weekend and could wrap up the division if the Giants lose to the Jets on Christmas Eve.

“I still have confidence,’’ Giants defensive captain Justin Tuck said. “We laid an egg today, but I’ve seen us rebound from things like this a lot of times. There’s no quit in our guys.’’

Surprisingly, Washington (5-9) looked very much like a playoff team in winning for only the second time in 10 games and embarrassing the Giants for the second time this season.

Grossman and the offense held the ball for 35 minutes, while the defense picked off Eli Manning three times and didn’t allow a touchdown until the final minute.

“They had a lot at stake and obviously we didn’t and I’m pleased the way we played,’’ Redskins coach Mike Shanahan said.

Coming off an emotional win over Dallas last Sunday night in a game that gave them control of their own destiny, the Giants showed nothing after a couple of early interceptions.

“I didn’t see the passion in us today,’’ running back Brandon Jacobs said. “We didn’t play well. We disappointed each other and our fans, and we’ve just got to play better. I can’t tell you why.’’

Washington never trailed in spoiling what the Giants hoped would be another step in their run to the playoffs. The Redskins took the crowd out of the game early, opening a 17-0 lead, and they were never threatened.

LeSean McCoy ran for three touchdowns to set two team records, and Philadelphia (6-8) rolled at home to stay in the NFC East race. New York (8-6) had its three-game win streak broken, falling into a tie with the Bengals for the final wild-card spot in the AFC, though the Jets hold the tiebreaker advantage.

Michael Vick threw for 274 yards and a touchdown, and also ran for a score in his second game back after missing three games with broken ribs. McCoy rushed for 102 yards and surpassed Steve Van Buren with his 19th touchdown of the season and 16th rushing TD.

The Eagles can only get in the playoffs by winning the NFC East; they are two games behind the Cowboys and one back of the Giants.

Mark Sanchez, who was outstanding during the Jets’ winning streak, completed 15 of 26 passes for 150 yards and two TDs. He was sacked four times and threw two interceptions.

“It’s about as bad as it gets,’’ Jets coach Rex Ryan said.

Matthew Stafford threw a 6-yard touchdown pass to Calvin Johnson with 39 seconds remaining to cap a 98-yard drive and Detroit (9-5) rallied from 13 points down late in the fourth quarter to stun host Oakland and take a two-game lead in the NFC wild-card race.

The win wasn’t sealed until Ndamukong Suh blocked Sebastian Janikowski’s 65-yard field goal attempt on the final play. Suh threw his helmet in celebration after providing a perfect exclamation in his return from a two-game suspension.

Ryan Matthews ran for two scores as host San Diego stayed alive in the AFC playoff race by neutralizing Baltimore, which earned a postseason berth before the game began. The Chargers (7-7) have won three straight after a six-game losing streak.

Philip Rivers threw for one score and reached the 4,000-yard mark for the fourth straight season, just the third quarterback in NFL history to accomplish the feat. He reached the milestone on a 21-yard completion to Malcom Floyd that set up Mathews’s 3-yard TD run late in the third quarter.

The Ravens (10-4) had their four-game winning streak snapped and fell a half-game behind Pittsburgh, which plays at San Francisco tonight, in the AFC North. Joe Flacco was sacked five times and intercepted twice.

Defensive end Red Bryant returned an interception 20 yards for the go-ahead touchdown in the third quarter - one of four picks by Seattle - and the visiting Seahawks (7-7) kept their faint playoff hopes alive while sending Chicago (7-7) to its fourth straight loss.

Brandon Browner returned another interception 42 yards for a TD in the final quarter as the Seahawks outscored Chicago, 31-0, in the second half. The first half wasn’t exactly great for the banged-up Bears either, losing top wideout Johnny Knox to a back injury. He was carted off the field and will have surgery today to stabilize a vetebra.

Drew Brees was unstoppable in Minneapolis, completing 32 of 40 passes for 412 yards and five touchdowns in leading New Orleans to its sixth straight win. The Saints (11-3) stayed two games ahead of Atlanta in the NFC South and moved closer to clinching a home playoff date.

Brees has 4,780 yards this season, putting him 304 away from Dan Marino’s record set in 1984 with two games to play. Brees was out of the game before Minnesota’s Christian Ponder had his fifth completion. The Vikings (2-12) were outgained, 573-207.

Newton completed 13 of 23 passes for 149 yards and two touchdowns and also rushed for 55 yards on seven carries. Yates, making his third career start, was 19 of 30 for 212 yards and two picks as the Texans (10-4) struggled after clinching the AFC South last weekend.

Cincinnati got a much-needed win in St. Louis to keep pace in the AFC wild-card hunt. Brandon Tate’s 56-yard punt return set up Bernard Scott’s go-ahead touchdown run late in the third quarter and Cedric Benson added a short scoring run in the fourth for the Bengals (8-6), who won for only the second time in six games.

The Cardinals have won six of seven to improve to 7-7. They trailed, 17-7, in the fourth quarter before Beanie Wells scored on a 1-yard run and Feely kicked a tying 33-yard field goal with 5:40 left in regulation. Cleveland (4-10) has double-digit losses for the 10th time in 13 seasons since rejoining the league.