THIS STORY HAS BEEN FORMATTED FOR EASY PRINTING
Giants 20, Dolphins 17 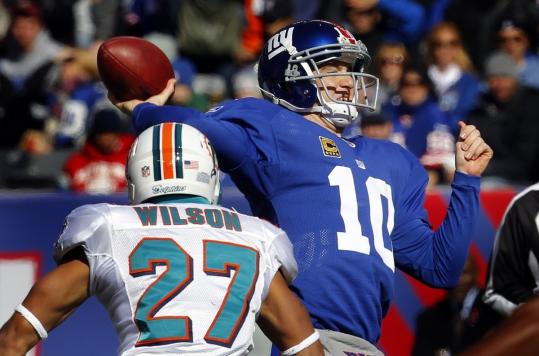 The Giants’ Eli Manning completed 31 of 45 passes for 345 yards and a pair of touchdowns. (Mike Segar/Reuters)
By Tom Canavan Associated Press / October 31, 2011

EAST RUTHERFORD, N.J. - All the warnings coach Tom Coughlin gave the New York Giants before their game with the winless Miami Dolphins seemingly went in one ear and out the other.

The Giants’ running game was nonexistent. The defense showed up for a half. And as the minutes ticked by, it seemed the Dolphins were sensing victory - that is, until Eli Manning stole it from them, like so many others before.

Manning threw a 25-yard touchdown pass to Victor Cruz with 5:58 to play and the Giants barely avoided a post-bye letdown, keeping Miami (0-7) winless with a 20-17 victory yesterday.

“The pressure was there just to get the win,’’ Giants guard Chris Snee said. “No one was concerned about, ‘Oh, we’re going to lose to a winless team, or we were going to lose.’ We thought we were still going to win the game and that’s just the confidence we have, and that stems from Eli.’’

Despite some pressure, Manning was outstanding in handing the Dolphins another late loss that has to increase the pressure on embattled coach Tony Sparano.

He hit 31 of 45 passes for 345 yards, two touchdowns, and no interceptions in rallying the Giants from an 11-point first-half deficit. Mario Manningham caught a 7-yard touchdown pass that got New York (5-2) back into the game late in the first half.

“We knew we were going to get pressure,’’ Coughlin said. “We probably got pressure 40-50 percent of the time. It caused some issues with the running game [58 yards]. But Eli made some big plays.’’

Manning said the Giants had chances to put up a lot more points, but they hurt themselves with the drops, penalties, and negative plays down close.

“We knew coming in it would be a tough battle,’’ Manning said. “A lot of games have come to the fourth quarter, and we knew it would be a tough road. They did a lot of good things defensively, ran a lot of different blitzes. We didn’t run the ball real well today, and we had to throw the ball more than we wanted to. But we’re capable of doing that.’’

And when the Giants are close this season, Manning has found a way to win most of the time. Four of their five wins have come in the fourth quarter.

“He is a clutch player,’’ said center David Baas. “No matter what happens, he stays calm and rises to the occasion.’’

Steve Slaton and Matt Moore (13 of 22 for 138 yards) capped the Dolphins’ first two drives with 1-yard runs. But Miami could only muster a 40-yard, third-quarter field goal by Dan Carpenter the rest of the way.

Ahmad Bradshaw, who missed much of the second half with a right foot injury, had runs of 2 and 11 yards to get the drive started and Manning hit Hakeem Nicks for 17 yards to the Miami 23.

The quarterback found a wide-open Cruz over the middle and the New Jersey native spun out of Will Allen’s attempted tackle at the 5-yard line.

“It was basically a seam route,’’ said Cruz, who has four touchdown catches in his second season out of UMass. “They were playing Cover-2, Eli put it on me, and I just went up the field, spun around, and got into the end zone.’’

A kickoff return by Slaton to the Dolphins 45 resulted in nothing when New York got two sacks, the last by a combination of Mathias Kiwanuka and Justin Tuck, who was playing for the first time in four games.

Miami, which wasted two timeouts early, got the ball back at its 16 with 3:35 to play and quickly got a 24-yard completion to Davone Bess.

However, Osi Umenyiora and Kiwanuka got sacks for 10-yard losses on consecutive plays to set up Webster’s fourth-down pick.

Miami, which scored seven touchdowns in its first six games, scored on its first two series, the first time they scored on consecutive drives this season.

Moore looked like Tom Brady - whom the Giants face next Sunday - in leading the Dolphins on scoring drives of 66 and 90 yards. He had a 15-yard, third-down scramble to set up Slaton’s 1-yard run, and an 11-yard, third-down run on the longer drive that he capped with a 1-yard bootleg on fourth down.