THIS STORY HAS BEEN FORMATTED FOR EASY PRINTING
Jaguars 12, Ravens 7 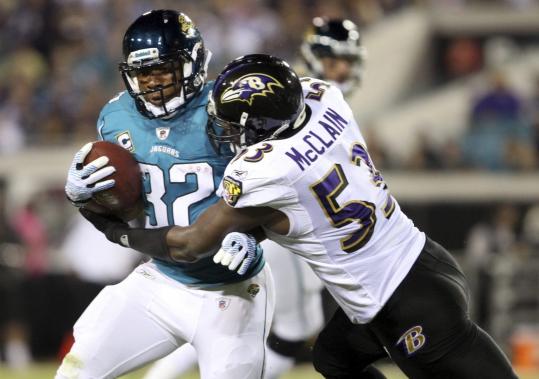 JACKSONVILLE, Fla. - On one night, on one big stage, the Jacksonville Jaguars did everything better than the Baltimore Ravens.

Maurice Jones-Drew ran for 105 yards against the NFL’s best run defense, Josh Scobee kicked four field goals, and the Jaguars snapped a five-game slide with a 12-7 victory over the Ravens last night.

Stepping into the national spotlight for a few hours, the Jaguars used their best defensive effort in five years to slow down Ray Rice, Joe Flacco and Co.

Jacksonville (2-5) didn’t allow a first down until the 5:26 mark of the third quarter, a mix of stout defense and inept offense. Flacco finally got the Ravens (4-2) on the scoreboard with a little more than two minutes remaining. He capped a 90-yard drive with a 5-yard touchdown pass to Anquan Boldin.

The Ravens failed to recover an onside kick when the ball bounced inches short of the required 10 yards. Scobee followed with a 51-yard field goal, his third of at least 50 yards.

The Ravens finished with 146 total yards. The Jaguars had 205.

The Jaguars set a franchise record by allowing only 16 yards in the first half, including 1 yard passing by Flacco, who was under relentless pressure for much of the night.

Baltimore finally got a first down on its 28th play of the game when Rice broke off a 12-yard run. That was only the second play longer than 10 yards for the Ravens, although they picked up two more first downs on the drive. It ended when Dwight Lowery sacked Flacco, and Billy Cundiff’s 52-yard field goal was wide right.

The teams combined to go 0 of 16 on third-down conversions in the opening half and the Ravens had 10 possessions through three quarters - eight punts, a missed field goal, and Rice’s fumble in the third quarter. The first time they reached Jacksonville territory, midway through the second quarter, they went backward 33 yards. Michael Oher was called for holding twice, and Flacco completed two passes that lost yards both times.