THIS STORY HAS BEEN FORMATTED FOR EASY PRINTING
NFL Week 7

Dolphins coach on the firing line 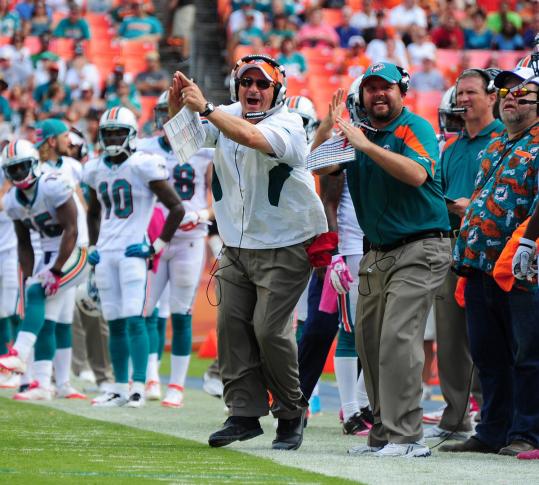 Dolphins coach Tony Sparano could sense a seemingly insurmountable lead slipping away, and after calling a timeout, he implored two officials to review a touchdown just scored by the Denver Broncos.

“If I don’t call a timeout, I’m [sunk] and now I’m getting fired, OK?’’ he screamed while pointing toward the team owner’s skybox.

The desperation in Sparano’s demeanor was understandable, but his plea for sympathy - captured by a television camera - went unheeded. The touchdown was upheld on review, accelerating the Broncos’ astounding comeback for an 18-15 overtime victory Sunday.

Miami’s collapse after being up, 15-0, was epic in scale - the first time since at least 1983 that a team had blown a lead of more than 14 points with three minutes to go, according to STATS LLC. The defeat left the Dolphins 0-6, which is why their coach is worried about his job security.

A nine-game losing streak, the NFL’s longest, has transformed Sparano into a virtual lame duck who seems certain to be fired at season’s end, if not before. Owner Stephen Ross courted Jim Harbaugh last January before sticking with Sparano, and there’s speculation Ross will pursue another big name, such as Bill Cowher, Jon Gruden, or Steve Fisher.

Or former Florida Gators coach Urban Meyer. The wild final minutes of the game included the odd spectacle of Ross standing on the sideline laughing and chatting with Meyer, who was in attendance because of the Dolphins’ wildly unpopular decision to honor the Gators’ 2008 national championship team.

Thirty minutes after Denver’s Matt Prater kicked the winning field goal, Ross was airborne in his private jet and bound for business in Seattle, leaving behind a season in tatters and a coach trying to hang on.

Washington running back Tim Hightower is out for the season with a torn ACL in his left knee, and receiver Santana Moss will miss 5-7 weeks with a broken bone in his left hand. Hightower’s knee buckled during a third-quarter run in Sunday’s loss to Carolina. Moss was hurt in the first half of the game and had surgery yesterday . . . Broncos leading rusher Willis McGahee is expected to have surgery this week for a broken finger on his right hand and will not play against Detroit Sunday . . . Browns kicker Phil Dawson nailed field goals of 52 and 53 yards in Cleveland’s win over Seattle despite a bruised thigh sustained before the kicks. The 13-year veteran will likely be ready for Sunday’s game at San Francisco. Also, Browns wide receiver Mohamed Massaquoi and tight end Ben Watson suffered concussions and coach Pat Shurmur said he does not know how long they will be out . . . Oakland’s Darren McFadden, the NFL’s leading rusher entering the weekend, sprained his right foot in the loss to Kansas City. McFadden was on crutches and had a walking boot on yesterday. Also, Raiders tight end Kevin Boss sustained a concussion in the game . . . Texans defensive back Danieal Manning suffered a broken left leg and is sidelined for about a month . . . Vikings wide receiver Percy Harvin, who missed the second half of Sunday’s game against the Packers because of bruised ribs, was scheduled for an MRI test to make sure the injury isn’t worse . . . Packers rookie running back Alex Green is out for the season after injuring his knee during Sunday’s victory at Minnesota.

Matthew Stafford is day to day after sustaining a right ankle injury in the final minutes of the Lions’ loss to the Falcons. Coach Jim Schwartz said his quarterback wore a protective boot after the game, but wouldn’t go into details about X-ray or MRI results. The coach hinted the injury wasn’t overly serious, saying if tests had shown anything too significant, Stafford would be “more than day to day.’’ Stafford’s fourth-down pass fell incomplete with 90 seconds remaining, and he came hobbling off. He had his ankle taped and said later he would have tried to go back in, but Detroit never got the ball back . . . Rams coach Steve Spagnuolo said Sam Bradford remains in a walking boot and isn’t sure of the quarterback’s availability for Sunday’s game against the Saints. Bradford has a high left ankle sprain, and sat out Sunday’s loss to the Cowboys.

Amid another flap over his on-field conduct, Ndamukong Suh is making some accusations of his own. The defensive lineman said Atlanta quarterback Matt Ryan’s brief injury against the Lions was “karma’’ and hinted that the Falcons have been guilty of dirty play. Ryan tweaked a knee when offensive lineman Will Svitek stepped on his left ankle, but he came back in the game a short while later and helped Atlanta beat the Lions, 23-16. “To me it’s karma for all the bad stuff they’ve done in the past,’’ Suh said. “Their offensive lineman hurt their own quarterback.’’ Atlanta players told the Atlanta Journal-Constitution after that game that Suh and fellow defensive lineman Cliff Avril taunted Ryan while he was down. Suh went on the offensive yesterday against the Falcons. “I can go back,’’ he said. “There’s like a 13-15 play clip reel that we have that shows everything they’ve done. That’s not even counting our game.’’ . . . Randy McMichael’s bitter comments continued to resonate 24 hours after the San Diego Chargers blew an 11-point halftime lead and lost to the Jets. McMichael said following the game that the Chargers beat themselves and “it had nothing to do with anyone on their team.’’ Jets coach Rex Ryan responded by saying, “Stay classy, San Diego,’’ a line made famous by Will Ferrell’s character, Ron Burgundy, in the movie “Anchorman.’’ . . . Dunta Robinson’s agent, Jason Chayut, said the NFL has reduced to $25,000 the fine it levied on the Falcons’ cornerback for a hit on Philadelphia’s Jeremy Maclin last month. Robinson’s original fine was $40,000.