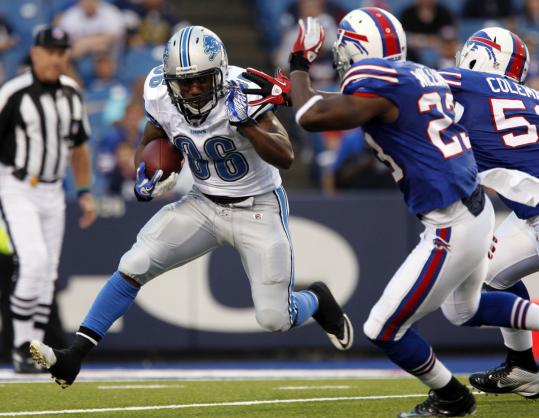 Running back Jerome Harrison was returned to the Lions after taking a post-trade physical this week with the Eagles. (DEREK GEE/Associated Press)
Associated Press / October 21, 2011

The network cited two unidentified league sources in the report, which said the tumor was revealed when Harrison had a physical after being dealt this week to the Eagles in a trade that was voided by the discovery.

Lions coach Jim Schwartz wouldn’t confirm or deny the report, citing a privacy issue. He said Harrison was back on the team’s 53-man roster.

Harrison’s agent, Mitch Frankel, did not return phone and e-mail messages. The Lions wanted to trade Harrison to Philadelphia for running back Ronnie Brown and a draft pick.

Browns president Mike Holmgren said negotiations with Peyton Hillis are “quiet now,’’ but the team remains open to signing the running back, who rushed for nearly 1,200 yards last season, to a long-term extension. Unable to reach agreement on a new deal, Holmgren said agent Kennard McGuire and the team have decided to let the season play out.

“No one has called off negotiations,’’ Holmgren said. “No one has said, ‘OK, let’s wait until the end.’ It’s still kind of in that floating area where you’re waiting for a phone call or you’re going to make a phone call. I don’t think anybody pushed anybody against the wall on contract talks and said, ‘We’re done.’ It’s kind of quiet.’’

Holmgren said the sides have agreed to “let Peyton play, let the dust settle, and see what happens.’’

Hillis is in the final year of his rookie contract, which is paying him $600,000 this season. He can be a free agent in March, and Holmgren said the Browns will pursue Hillis even if he tests the open market.

“Are we going to be a player in there [free agency] to try and keep him here?’’ Holmgren said. “Absolutely. I told him that yesterday.’’

Commissioner Roger Goodell sent a letter to leaders of a congressional committee outlining the league’s plans for collecting and saving blood samples of players in hopes of eventually testing for human growth hormone.

In the letter to California Rep. Darrell Issa and Maryland Rep. Elijah Cummings of the House Committee on Oversight and Government Control, Goodell said specimens would not be analyzed and players would not be subject to disciplinary proceedings until remaining issues about the testing regimen are resolved. Until that time, blood samples would be stored.

The NFL and the players agreed to begin blood testing for HGH as part of their new collective bargaining agreement reached in late July - but only if the union agreed to the methods, which it has yet to do. The league was ready to begin collection next week, but on Tuesday, the union told the NFL to hold off.

In the letter obtained by the AP, Goodell told the congressmen that members of USADA, the US anti-doping agency, would be “available to meet with the players and NFLPA officials to review information on testing and the underlying science.’’ Goodell said the meeting “is to occur within two weeks.’’

Saints coach Sean Payton said tight end Jimmy Graham, who leads the team in receiving, has missed practice because of a sore right ankle. Graham has 39 catches for 620 yards and three touchdowns, and last week became only the second tight end to have four straight games in the same season with 100 yards or more receiving, matching the feat accomplished by Tony Gonzalez in 2000 . . . Browns linebacker Scott Fujita is unlikely to play Sunday against Seattle after being sent home before practice for the second straight day with post-concussion symptoms. Fujita was injured in last Sunday’s game against Oakland. Browns defensive coordinator Dick Jauron said yesterday it was unclear after watching tape when Fujita got hurt, but it may have happened on a “lead’’ play in the second quarter when he stepped into a hole at the line of scrimmage to take on a blocker . . . Dolphins receiver Brandon Marshall (quadriceps) and running back Reggie Bush (groin) returned to practice after sitting out one day with injuries.