THIS STORY HAS BEEN FORMATTED FOR EASY PRINTING
NFL NOTEBOOK

Screenings would detect use of PEDs 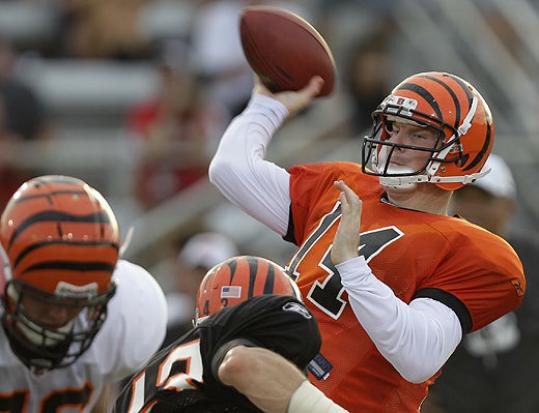 The NFL is adding game-day testing for performance-enhancing substances - but not recreational drugs - this season under the new collective bargaining agreement.

The league’s senior VP of law and labor policy, Adolpho Birch, said yesterday tests weren’t conducted in the past on days there were games “because of logistical issues involved, much more so than any philosophical issues.’’

Birch said the league has developed a way to test that “is not overly disruptive to the clubs and that respects the game-day process.’’

Birch would not say where talks between the NFL and the players’ union stand - or even if they’ve started - about details that need to be worked out before the league can introduce random, year-round blood testing for human growth hormone.

The NFL and union agreed that HGH testing can become part of the drug program under the new, 10-year collective bargaining agreement that was ratified by players Aug. 4. But first issues such as the appeals process and how tests are taken have to be negotiated.

“The key to this testing is the randomness of it, and that every player is subject to and eligible for testing on a year-round basis, with no notice,’’ Birch said.

The council’s 12-0 vote set the stage for city leaders to later consider binding agreements with developer Anschutz Entertainment Group on the project’s financing, leasing arrangements and other details.

“This is not the beginning of the end but perhaps the end of the beginning,’’ Councilman Eric Garcetti said before the vote was taken.

The agreement anticipates the issuance of $275 million in tax-exempt bonds for the relocation of a convention center hall to accommodate the proposed $1.2 billion football venue.

It would require to extend a series of financial guarantees over the course of the project as a safeguard against shortfalls and other risks.

The council vote gives AEG officials the solid demonstration of city support they said they need in order to ramp up efforts to secure a team at the planned stadium known as Farmers Field.

“It sends a very strong message to the league now,’’ AEG president and CEO Tim Leiweke said at a news conference after the vote.

NFL spokesman Brian McCarthy said after the vote that the league was aware of the council vote and would continue to monitor all stadium developments in the Los Angeles area.

Johnson stays out Titans running back Chris Johnson failed to report to camp yesterday - the deadline for players under contract to report - and can be fined up to $30,000 for each day his misses. Johnson, who has two years left on his contract, appears determined to secure a lucrative long-term deal, rather than an accrued season toward free agency. Johnson said last season he wanted a new contract with $30 million guaranteed. The Titans revised his contract by boosting his 2010 salary by $1.5 million to $2.05 million to convince the running back to report . . . Rookie quarterback Andy Dalton will start the Bengals’ preseason opener Friday night in Detroit. Coach Marvin Lewis said Dalton has shown “exceptional’’ poise so far. Lewis said his starters will play a little longer than normal for a preseason opener as they try to make up for lost time from the lockout . . . After only five practices, Kevin Kolb will lead the Cardinals into their preseason opener tomorrow night in Oakland, Calif. Kolb, acquired from the Eagles, hopes coach Ken Whisenhunt gives him as much playing time as possible as he works to learn a new system and develop chemistry with his teammates . . . Asked about a sloppy showing by the Packers offense the night before, Aaron Rodgers channeled his inner Allen Iverson. “Practice?’’ Rodgers said yesterday in a deadpanned tribute to the NBA star’s oft-imitated rant. “We’re talking about practice? Not talking about the game, talking about practice, right?’’ Rodgers acknowledged the offense made too many mistakes Monday night, but didn’t see any sense in dwelling on it. And the quarterback firmly dismissed the notion that the reigning Super Bowl champions made a mistake by not getting together for informal practice sessions during the lockout, offering only a one-word answer: “No.’’

Burress takes it easy Plaxico Burress was held out of team drills in practice as the Jets continue to play it safe with the wide receiver as he recovers from an ankle injury. It doesn’t appear to be a setback for Burress, who tweaked his left ankle while running routes last week. “We’re just trying to avoid that big setback, but he’s doing more and more,’’ said coach Rex Ryan. In addition, first-round pick Muhammad Wilkerson, a defensive end, sat out team drills as a precaution with a hip injury . . . Panthers receiver Steve Smith cut his left middle finger during practice but X-rays revealed no broken bones. Smith is the team’s all-time leader in touchdowns. In other Panther news, starting right guard Geoff Schwartz is having his hip examined after sustaining an injury during Saturday’s Fan Fest practice . . . The Titans agreed to terms with safety Anthony Smith, the second veteran at that spot added in five days. Smith was a third-round pick by Pittsburgh out of Syracuse in 2006, and he has played in 63 games with the Steelers, Rams, Jaguars, and Packers. The 6-foot, 200-pound Smith has seven interceptions with 19 starts . . . A San Diego judge said a Chiefs fan who was arrested at a 2009 Chiefs-Chargers game after flipping off the crowd was subject to the NFL code of conduct but did not commit any crime. Jason Ensign’s attorney, Mary Frances Prevost, said Superior Court Judge Gale Kaneshiro has granted her request to dismiss all charges against him.